So, this is a recipe for easy-peasy mousse with truly the most perfect of light and fluffy textures. But said texture is not achieved via the traditional method of whipping eggs. It is accomplished instead with a genius hack: melted marshmallows. Now, before you turn the page, or scroll away hurriedly, scoffing at the mere thought of adding marshmallows to mousse, hear me out. Although I cannot explain the science behind why melted marshmallows impart a mousse-like texture to melted chocolate and whipped cream, though my guess is that it has something to do with the gelatin in the marshmallows, that is, in fact, exactly what they do. 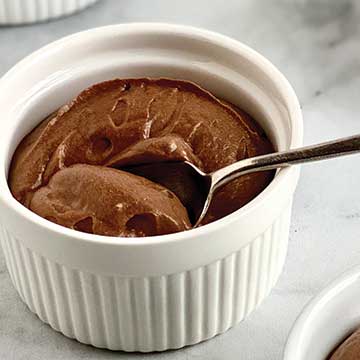 I stumbled upon this trick while reading a recipe for “instant” mousse (as I am drawn to any and all recipes with the words “instant” or “easy” in the title) and was instantly (pun intended) smitten. I modified the recipe to make it my own, adding more heavy cream and omitting the butter and hot water. The resultant mouth feel of my finished product was, indeed, exactly like that of a mousse in which much more time and effort had been spent on its ethereal texture, than that which had actually gone down. And for that I was pleased.

But when both my boys went bananas for the mousse, I knew I was really onto something. Rarely do I make something that they each respond to so positively, particularly the younger one who is downright picky when it comes to dessert. In fact, whenever I ask him to taste-test my latest and greatest treat, he often tells me that it is just “too sweet,” a description of which I am honestly not sure what to make.

This time, in fact, it was my youngest who tried the mousse first, when I was still tweaking the recipe. He took a bite and then another and another. But when I asked him what he thought, he explained that it was fine, but tasted nothing like chocolate. Hmmmm. You might think that at that point I rolled my eyes and walked away, vowing never to share anything sweet with the kid again. But guess what? He actually has a great palate and the truth is, if he likes something, then I know it’s good and if he doesn’t, I know it has issues. And so, I listened to him.

My original recipe included melted chocolate (of course) but nothing to amp up or deepen that flavor – and I realized that my second-born might be actually be onto something: maybe the “secret” ingredient in the mousse – the one that gave it all of its wonderful “mousse-like” texture (i.e.: the marshmallows) was canceling out the chocolate flavor. I rectified the situation by adding a bit of Dutch process cocoa powder (I like Dutch process for its dark color and strong cocoa flavor) and a bit of espresso powder, which brings out the flavor of chocolate without actually adding the flavor of coffee (another scientific phenomenon which I cannot explain).

And you know? I solved the problem in spades. Not only was the mousse now deeply chocolate-y, but it was not too sweet (despite the marshmallows) and the picky kid ate at least three ramekins of it. The not-so-picky kid also ate about three containers worth, and I could not have been happier running to and from the kitchen, delivering them chocolate mousse for the better part of an evening.

Some thoughts on the recipe:

The recipe takes almost no time to come together – the only “time” really, is the time it takes the melted chocolate and marshies to cool, and you can speed this up by submerging the bowl in an ice bath and stirring frequently. And although you can refrigerate the mousse after transferring it to ramekins, for a chilled mousse experience, it is also ambrosial enjoyed at room temp. However, if you do serve it right away, the flavor of the espresso will be a bit more pronounced – it fades after being chilled – so consider yourself warned.

Place marshmallows, 3/4 cup cream, chocolate, cocoa and espresso powders and salt in a medium saucepan over medium heat and cook until melted and smooth, stirring frequently. Transfer to a large mixing bowl and let cool to room temp.

In a stand mixer fitted with the whisk attachment, or in a bowl with a handheld mixer, whisk the remaining cream and vanilla on medium to medium high speed until stiff peaks form.

Gently fold the cream into the cooled chocolate mixture in three additions until combined.

Transfer to six 6-ounce ramekins and serve immediately with additional whipped cream or refrigerate until chilled. •