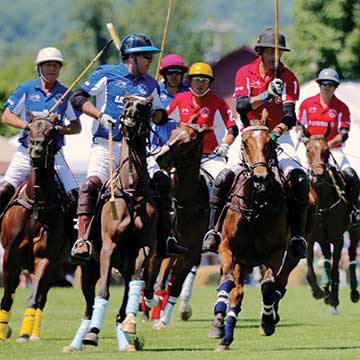 The true origins of polo appear to be as hotly contested as some modern day polo matches … but it’s always wise to start somewhere. Most agree that polo began as a kind of “folk game,” played by nomadic tribesman in central Asia. Many sources also argue that polo originated in Persia (modern-day Iran) at or around the sixth century BC.

The history of polo

At the point when polo stopped being an ancient, backyard pastime, it morphed into a type of training game for cavalry units, usually the elite troops; the King’s Guard. Like a simulated mini battle, polo was the way men prepared for war, with as many as 100 (with some sources reporting up to 1,000) players on horseback on each side. Polo later evolved into a Persian sport played by noblemen (and women). The sport migrated west to Constantinople (present-day Istanbul, Turkey) and east to Tibet, China, Japan, and India.

According to The Evolution of Polo, by Horace A. Laffaye, the word “polo” comes from the Tibetan word “po-lo” or “po-long,” which refers to a ball made of willow, and also referred to the polo playing field. In the early development of the sport, everything was in flux – from the size and shape of the ball (which was sometimes not a ball, but rather the head of a dead animal, or an animal carcass), to the size and shape of the field, to the length of the game, and so on. But most often, what was true then, remains true today; the winners always got to keep the ball (or animal head).

The earliest written reference to polo seems to appear in a seventh century manuscript which confirms that the first patrons of polo were the rulers of the Parthian Dynasty (in ancient Iran and Iraq) who reigned during the time period spanning 247 BCE and 224 CE.

Clearly, the ancient form of polo is starkly different from how the game is played today. For one, the modern game doesn’t have the winner carting off a headless goat, nor are there 1,000 mounted participants on the playing field whacking a ball about the size of a man’s head. However, the game of polo, then and now, involves a fair amount of inherent risks.

In the early developmental years, playing polo was literally a life and death sport. When Emperor T’ai Tsu of the Posterior Liang dynasty (907-921) lost a relative during a polo match, he executed all of the remaining players (on both teams). In India, the Sultan Qutb-ud-Din Aibak was another casualty to a polo game. History says he died as a result of “violent contact with his saddle.” Ouch.

While the game has consistently been a test of a man’s courage and his value, there are ancient references to female players participating as well. In Arabian Nights, the ancient collection of Middle Eastern folk tales, there is a description of ladies playing a game against the king. “Seventy maidens like lionesses presented themselves before Shirin, all blazing with ardor.  The maidens were seated in their saddles like cypresses.” Many forms of Chinese sculpture also depict women playing polo.

The spreading of the sport

Skipping many years forward, polo seems to have traveled across a few continents, and it remains a favored past time for both men and women in the United States. Yet, before landing in America it made stops in India, Ireland, France, Spain, England, and a few other countries.

The first two Englishmen reportedly to have played polo were Lieutenant Joseph Ford Sherer and Captain Robert Stewart. Stationed in Manipuris, India, the two officers witnessed the game called sagol kanjai (translated, sago: horse and kanjai: hockey stick), being played by the local people. From that point forward, Sherer was hooked. Soon after the two were playing with the local tea planters in the area a game of horse hockey.  Not long after that, the Lieutenant and Captain started the Kangjai Polo Club in March of 1859.

It was James Gordon Bennett, Jr., the well regarded publisher of the New York Herald (founded by his father, James Gordon Bennett, Sr.), who introduced the sport of polo in (not surprisingly,) New York City, at Dickel’s Riding Academy at 39th Street and Fifth Avenue. Gordon Bennett, as he was known, lived the high life in a flamboyant manner with expensive mansions, private railroad cars, and yachts. In fact, Gordon Bennet was noted as having won the first trans-Atlantic yacht race. He is also credited in history as having organized the very first polo match in the United States, and later he helped found the Westchester Polo Club in 1876, the first club in America which was established at the Jerome Park race track.

Closer to home is the Mashomack (pronounced: Ma-Show-Mick) Polo Club in Pine Plains, NY. The word Mashomack is originally a Native American word coming from Manhansack-aqua-quash-awamock, which translates to “where they go by water,” the Algonquian name used by the resident Manhanset Indians in the seventeenth century who inhabited Shelter Island. The Mashomack Preserve on Shelter Island, NY, is owned and operated by The Nature Conservancy, and is now a major Native American archaeological study site. The Mashomack Preserve Club relocated from Shelter Island to Pine Plains, and thus, the name migrated when polo followed.

The word appears again as the Mashomack Polo Club was founded north of the City, which carries on the tradition of one of the earliest games known to man (and woman).

Mashomack Polo Club, founded in 1984, is located on a 2,000 acre preserve in Pine Plains, much of which is deeded to the Dutchess Land Conservancy. The facility features five tournament-class fields, one practice field, stick and ball acres, a regulation outdoor polo arena, and lots of stabling. The club offers league polo from four goal to 12 goal for both men and women, and various tournaments.

Before it was a polo club, Mashomack was a dairy farm with many incredible barns built during the 19th century. In its heyday, the original dairy farm spread over approximately 7,800 pastoral acres and provided milk to families from Albany to New York City. With a fundraising effort from the club members and patrons, some of the historic barns have been preserved.

For this article I spoke to Karen Klopp, Co-Chair of Mashomack’s Annual International Polo Challenge and Luncheon taking place at the Mashomack Polo Club on June 11. This year marks the 20th year of this event with a celebration and featuring six teams including Brazil, Croatia, Ecuador, France, Great Britain, and Mexico. Polo action is ongoing throughout the festive weekend, June 9-11.

Karen Klopp said, “I’ve been involved for 15 years and have watched the international challenge grow.” She explained that the festivities start around 11:30am with an elegant champagne reception followed by a tented field-side luncheon.“Typically The Challenge was the USA against another country,” said Karen, “but since this is our 20th anniversary, we’ve asked people to come from all over the world in the spirit of the international theme.”

Karen mentioned that, “It was Mashomack Polo President, Bruce Colley, who in 1997 reenergized the club by starting The Challenge.” With the club experiencing a period when both the number of spectators and players fell off, “Bruce came in and revived the sport and began the luncheon as a fundraiser for local charities,” she said. “Usually, this is the first event of the social season in Millbrook/Pine Plains, and a lovely day in the countryside.”

Funds raised at this year’s International Challenge will be donated to The Pine Plains Fire Hose & Rescue Co., The New York State Trooper Foundation, and the Ronald MacDonald House, where Bruce Colley is involved.

Over 1,500 patrons and spectators are expected for this year’s event at Mashomack. “There have been other clubs to play in,” said Karen, “Mashomack  has the best field in the Northeast. The fields sit on a great gravel base perfect for drainage.” She added, “We have a nice group of convivial players, and its got stabling for horses and a very nice atmosphere.”

What also makes Mashomack different is that the grounds are magnificent and sit at the base of Stissing Mountain. “There’s a fantastic view looking up at Stissing Mountain. When you’re in the tent, you see the beautiful vista,” said Karen.

The Challenge will begin with a colorful parade of international flags led onto the field by the New York State Trooper Honor Guard, followed by the teams of mounted players. Karen said, “There will be more than 500 people in the luncheon tent watching – the players mingle in the tent and that’s fun for the fans.” An annual silent auction will also take place during the luncheon and matches. To help the Club raise funds, it will offer bidders an opportunity to take home an exciting trip, fine art, and luxury goods and services of all kinds. There are a couple of local sponsors like Hillrock Estate Distillery and Heather Croner Real Estate/Sotheby’s International Realty, in addition to other sponsors like Turkish Airlines and Landrover, to name a few.

For an opportunity to witness one of the oldest, and fastest-paced sports on the planet, plan to be at Mashomack for a fabulous polo weekend.

To learn more about Mashomack or to purchase tickets and tables to the event, which are still on sale on the club’s website, visit www.mashomackpoloclub.com.