MORGAN’S RESTAURANT AT THE INTERLAKEN IN LAKEVILLE, CT

Morgan’s is a little hide-away on the outskirts of Lakeville, CT, at the Interlaken Inn. They have recently renovated their restaurant and it’s a great little place to go for meetings, dates, and family dinners.

We went there on a beautiful summer Sunday evening, with kids and in-laws in tow. There were a handful of folks at the bar, with about half of the tables occupied in the restaurant – we’re early birds. The atmosphere is … well, for lack of a better word, “fresh.” It is comfortable and just very fresh. We were seated at a nice table, overlooking the back garden

area. Even though there were people all around us, it wasn’t noisy. There was even a podcast interview / recording happening at the table behind us, but the noise was faint and we obviously didn’t disturb them, even though we had small children with us.

The menu offerings all sound wonderful and delicious.

We ordered an array of drinks including a cocktail and wine. I will point out that they had a great deal on drinks on this Sunday, $5 drinks! And as we received them, a musician began playing on the other side of the restaurant, setting an even more enjoyable mood. I’d like to highlight what I ordered, pictured above. I had seen their kale salad on social media and when I saw the image of it, I knew that I needed to at least try it. It was delicious, fresh, very tasty and satisfying. For my main I opted to go with the fish and chips. I will say that I’m a bit of a fish sno

b, having grown up on an island surrounded by ocean with ample fresh fish AND having a number of fishermen in my family. I know what fresh fish is. With that said, the fish was delicious! It was definitely fresh, and that makes all of the difference when you have a fish and chips dish. The portion sizes were bountiful, and even though my main came with a mini hot sauce (a first for me), I stuck to the basics: tartar sauce with the fish and ketchup with the fries. Which brings us to the fries: not all fries are created equal. You know what I’m talking about. They can’t be over-done and they can’t be soggy or too thick. They need to be fried just so. The chefs at Morgan’s have their fries down to a science, they were very complimentary to the fish.

Overall the food was great, the service was very good

with an attentive wait staff, the food came out in a timely fashion and the atmosphere was very relaxing. Price point, a little on the higher side for some items, but in my opinion well worth it. Customers should also factor in some of the great deals they have, such as the $5 drinks. 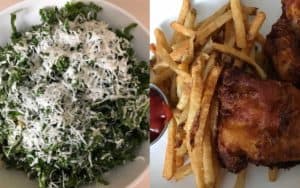