Much Ado About Grading 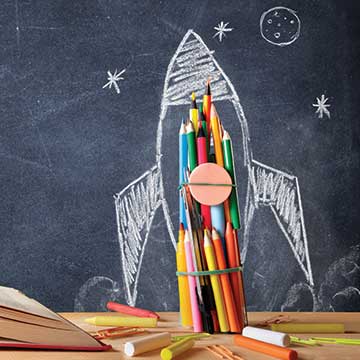 It is summer, and I’m sitting in a coffee shop just yards from the Yale University campus, eavesdropping on two families who clearly have their sights set on admission. Two of the girls are wearing Yale sweatshirts and a third sports a Dartmouth hoodie. Their mothers model that incongruous ensemble of athleisure and expensive watches that will probably look ridiculous to them in ten years, and they order the requisite $9 smoothies to complete the motif.
They sit down at a family-length table, and within minutes, they are talking grades: how one girl did in Mr. So-and-so’s class; how the other one got an A in History without doing any of the homework; how frustrated they were about group work in AP Physics. Again, this is summer. July 12, to be exact.

There’s a reason some people call grades “marks”: they leave them on us. Everyone has a story to tell about grading, whether we graduated last June or forty-seven Junes ago, valedictorian or high school dropout. As the poet Taylor Mali put it, teachers can “make a C+ feel like a Congressional Medal of Honor and an A- feel like a slap in the face.” Being evaluated, scored, ranked, and quantified is to be measured, and when we don’t measure up to someone’s expectations, it can be traumatic.

But learning isn’t traumatic by nature, and most of us will question, investigate, research, and think about topics that interest us without the incentive of a grade. A growing body of educators is recognizing the disconnect between grading and learning, and they are causing a shift in schools with their efforts to align how they measure progress with what they are trying to measure. Beneath grades and curriculum, however, is communication. If schools are organized for the purpose of learning, how can they accurately communicate the learning progress of students to the satisfaction of parents, colleges, and other interested parties?

This past school year, schools in the Region 1 School District in Connecticut took the first steps in dramatically changing their grading practices by eliminating grades of D and F, allowing students to re-do work that did not meet expectations, and working with students to help them meet those expectations at their own pace. Sounds simple, right?

As the Assistant Principal at the high school, I was in the center of these changes, and during my twenty-year career in education, I can’t think of any other educational issues that have been more controversial or complicated. Grading is what I call a “Sweater Problem”– it seems like a straightforward matter until you begin picking at one thread and the whole thing unravels. What about class rank and GPA impact? Athletic eligibility? Scholarship decisions? Honor roll? College admissions? And for goodness sakes, who is going to be the valedictorian?!

Although grading on a percentage or alphabetical scale has only been around since the late 1800s, it has become a part of the institution of school, and our culture is thoroughly interwoven with the notion of ranking and scoring. Furthermore, in the digital age, numbers have taken on a new significance and luster as states use standardized test results, attendance statistics, and demographic data to measure the effectiveness of schools according to statutory mandates such as the Every Student Succeeds Act (ESSA).

Research into grading has rightfully called into question just what is behind some of these numbers, and specifically classroom grades. Such research is not new: one study from 1912 reviewed the grades of English and Geometry teachers and found variances of 34 to 67 points, causing some schools to adopt the A-F scale as a more fair and accurate method of scoring (Starch & Elliot, 1912, 1913). Moving from an F to a D on that scale is one score point, whereas it could be up to 60 or 65 points on a percentage scale.

In most traditional classrooms, a final grade is an aggregation of a set of measurements performed primarily by teachers, and generally at their own discretion. Individual grades may value tests, projects, quizzes, and homework to varying degrees, and this is both necessary and accurate in high schools that offer a range of subject matter and assessment methods. Schools should also have the freedom to determine the values they are trying to instill in their graduates, and to find accurate ways to report on how students are progressing toward attaining those qualities. For instance, if a school believes that citizenship is a worthwhile value to nurture in students, they should be able to clearly communicate what a good citizen is and where a student is in acquiring those skills.

But exactly how a grade is determined can be confusing, especially in high school when students take as many as eight different courses at a time. Take my daughter’s middle school grades, for example: she takes four core courses, plus several “specials” in Art, Music, and Health/PE, and come report card time, all I see is a lot of numbers. Each of the teachers has different percentage weights assigned to tests, quizzes, homework, and projects, so that even I, as a former teacher and current school administrator, have difficulty determining the relative impact of a low quiz score on the overall grade.

This is missing the real point of grades, though. When parents attempt to discern the cause of an unsatisfactory grade, the construct of grading becomes the “Emperor’s New Clothes.” Should my daughter be doing more of her voluntary math homework to boost her grade? Or if a good grade is the goal, should she put her effort into studying for tests? Throw in extra credit options, and the whole endeavor becomes a game that not every student plays well. Rather than chasing points, students should be pursuing learning that they need in order to master the content of a course. As parents, we can support the learning process much more effectively if we know that, say, plotting points on a graph is really the cause of a low grade, not our child’s study habits or forgetfulness about turning in homework.

Ultimately, the goal of grading reformers is to communicate those learning needs as accurately and efficiently as possible. At this time, it is unrealistic for teachers to report progress on the dozens of learning standards that comprise the content of a course, but teachers in most schools have been working to identify the “Power Standards” that capture the most important learning a student must master, and as testing technologies and grading programs evolve, we are approaching a day when teachers, students, and parents will all have timely, accurate, helpful information about a student’s development that will inform what, how, and when they learn.

By the time you are reading this, nationally-recognized grading expert Tom Guskey will have spoken to teachers and parents in Region 1 about the need to shift grading practices and how to do it (his visit was planned for August 31). If you weren’t able to make it, his clear and sensible explanations provide helpful starting points for schools that are considering a shift and for parents who are pining for more information to help their students learn, and his Answers to Essential Questions about Standards, Assessments, Grading, and Reporting is a great place to start your own learning about the topic. •