Much Ado About Nothing

There is a bit of everything in the current offering of “Much Ado About Nothing” at Shakespeare & Company in Lenox, MA, playing through August 14 th in The New Spruce Theatre. In sumptuous blending, there is treachery and trickery, jealousy and jeopardy, love and loss and above all a wonderful blanket of comedy. The Bard knew how to position his characters, give them bountifully textured speeches and make sure that by the end of Act V, all loose ends were neatly resolved. “Much Ado About Nothing” is a grand example of that skill offered in one package.

With unvarnished appreciation, the cast that director Kelly Galvin has assembled under the open New England sky captures the attention of the audience from their first entrance and skillfully keeps everyone at rapt attention until the final charming dance. At the conclusion of the performance, it did not take long for the audience to get to their feet and robustly applaud this beautifully assembled amalgam of music, dance, deception and delight.

It is worth the price of admission and the drive to the Shakespeare &amp; Company campus to be hypnotized by the performances of the stars of the play. When Nigel Gore appears in a Shakespeare play in the Berkshire Hills, one can be certain that his elegant portrayal will elevate the evening. “A rising tide …” his portrayal of Leonato is richly appointed with years … decades… of embodying the Shakespearean aura.

At the heart of the Bard’s effort are two love stories … one that seems so simple as to be a “fait accompli” from first meeting. The other is far from a given, since the second pair seem to spend most of the play in locked verbal conflict. Young Claudio (Gregory Boover) is smitten by fair Hero (Gina Fonseca) and they intend to marry in the morning. Not so fast. When treacherous Don John (Madeleine Rose Maggio) attempts to derail the marriage by spinning intricate and deceitful lies, the marriage fails before it begins.

In the parallel adventure, Beatrice (Tamara Hickey) seems to enjoy nothing more than verbally sparring with Benedick (L. James) whose towering ego keeps the verbal fisticuffs advancing whenever they are on stage together. They cannot ever get together. Not so fast.

Much to the enjoyment of the audience, both Hickey and James have such boundless command of physical comedy that watching their athletic performances is pure delight. Leaping, spinning, dancing, crawling and plunging into the attendant foliage, they are equals from first step, which makes their connection at the play’s conclusion that much more enjoyable.

The resolution of the first couple’s disintegrating love affair is made possible by the vaudevillian comedic performances of the night watch, led by the bumbling Dogberry (Caroline Calkins) whose lines written centuries ago are reminiscent of hearing the late comedian Norm Crosby mangle the language with his malaprops.

Reading Shakespeare is an ever-unfolding tutorial in the beauty of the English language. Reading, however, cannot add the layers of music and dance that director Galvin, supported by Movement Director Sheila Bandyopadhyay have brought to the production. Each of the actors moves with a gentle grace during these vignettes, giving the production an added buoyancy.

The New Spruce Theatre is an outdoor venue with excellent sight lines and comfortable seating that make the 2 + hour production pass quickly. Evening performances are treated to great sunsets as audiences delight in “Much Ado About Nothing.”

Tickets are available at www.shakespeare.org or by calling the box office at 413-637-3353. 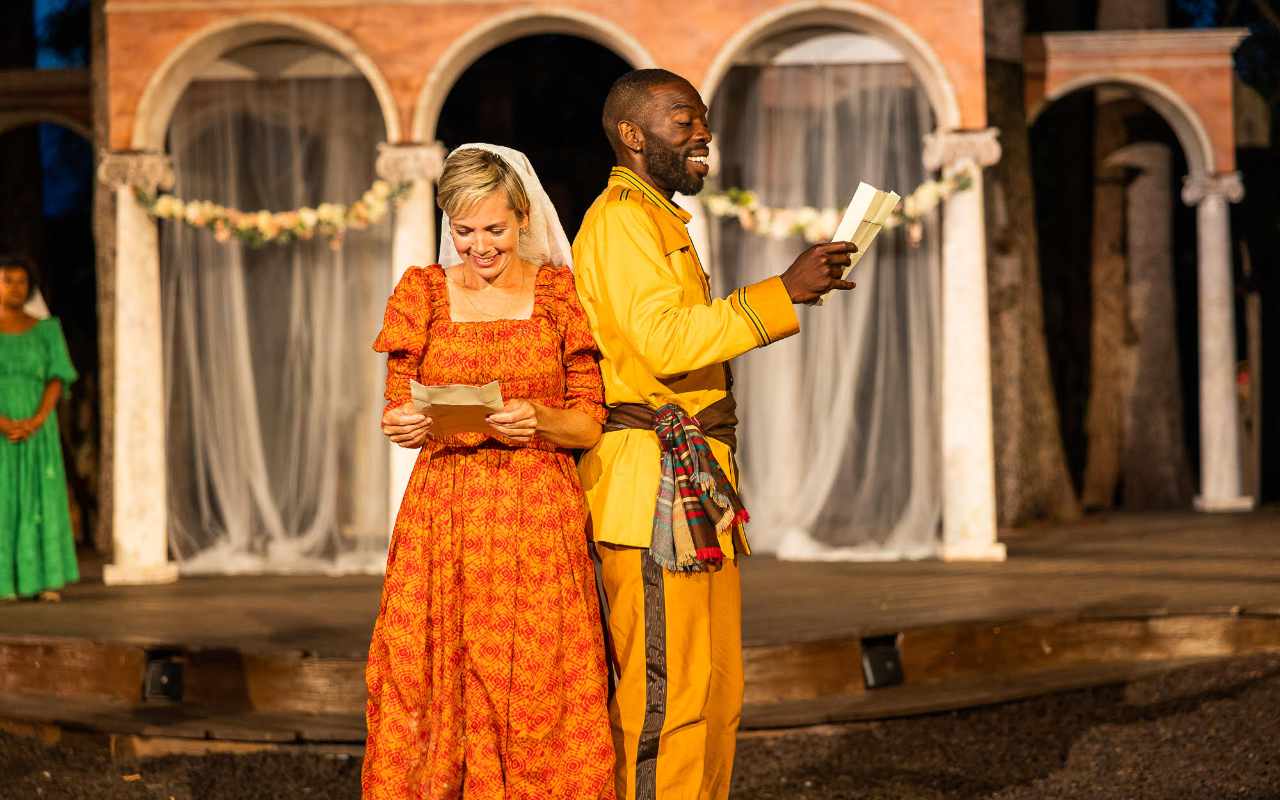