The era of silent films ushered in the evolutionary landslide that has led us to digital streaming, spectacular visual effects, panoramic sound and the fully immersive world that is film today. Even in the era of COVID-19 when visiting the neighborhood cinema has been replaced by streaming services and parking lot ad hoc theaters, the magic of film is magnetic and consuming.

From the moment in 1903 when The Great Train Robbery mesmerized audiences with 12 minutes of non-stop action, a new art form emerged. Stories were told. Mysteries unfolded. Good guys chased bad guys and, most of the time, good triumphed over evil. Loves were lost and won as emotions ran high and love conquered all.

Then came “the talkies.” It was 1927, and The Jazz Singer ushered in a new era in film. But, what about silent films? Could they still be relevant?

Enter Donald Sosin and Joanna Seaton, the husband and wife creative couple from Lakeville, CT, who have focused their immense musical talents on providing the soundtracks to literally hundreds of silent film classics, making the early creations of a nascent industry still engaging, amusing and relevant.

“You  must have been a beautiful baby…”

Joanna grew up in the Hell’s Kitchen section of New York City, near the Theatre District and was, from infancy, an actress and model. Chosen by the folks who manufactured Ivory Soap to be there “baby” one year, she appeared in print across the country.  Intent on a life in the theater, she had a degree from Cornell and was on her way to a career as a singer/songwriter, gifted with a lovely lyrical voice. She returned to New York City and had begun building a career on the stage when she met Donald.

He was already recognized as a talented pianist and composer who flew through the University of Michigan as a composition major, accompanying dance classes, providing the musical tracks for dormitory screenings of silent films and, by his last two years on campus, being the accompanist for all campus screenings.

Donald had navigated his way through the twists and turns of the New York theater, working with performers as they readied themselves for auditions, playing in the pit orchestras on and off Broadway and filling in at the Metropolitan Museum of Modern Art (MOMA) when the regular pianist was not available to accompany the museum’s screenings of silent films. That freelance pursuit morphed into a full-time appointment. It was there, sitting in the dark, watching black and white silent classics projected on a vibrant screen with expressive music provided by Donald that Joanna realized she was in love – with Donald and with silent film.

When the two were attending the 1999 Il Cinema Ritrovato, a silent film festival in Bologna, Italy, where Donald was performing, they made a discovery that became the foundation for the career they share. A couple appearing in the festival utilized both the husband’s compositions as well as the wife’s vocal skills to bring specific lyrical songs to bear on the story. It was magical.

Songs out of the silence

Years of research and discovery have uncovered records pertaining to many of the film classics that have been scored and performed by Joanna and Donald. For some films, there were cryptic notes about the scores. When the year of a film’s release and distribution was determined, exploration into the music of the day, the popular tunes that were known to contemporary audiences gave the couple specific cues to what music would have been heard in the “nickelodeons” across the country. And, in some unique cases, sheet music would be visible on a piano being played or a soloist performing in an otherwise silent world of the original film.

When Donald and Joanna provided the lively musical soundtracks to a recent screening of two recognized classics at the Sharon Playhouse sponsored by Millerton’s Moviehouse, the artistry of their partnership was on full display. Grandma’s Boy, the first five-reel feature created by silent film superstar Harold Lloyd, includes a moment when the female lead, played by Mildred Davis sings to her suitor, Harold Lloyd. As the scene appeared, Donald played and Joanna sang and the “silent” movie became alive for the audience. “You Are the Ideal of My Dreams” by Herbert Ingraham (1910) wafted across the assembled moviegoers and what was old became new, again.

Worth noting, from a purely historic perspective, is that the song must have worked. Not only did “the boy get the girl” in the film, but Lloyd and Davis married the year after the film was released and made a total of 13 films together over their careers.

Travel has been a great part of the Sosin/Seaton story. After spending years in New York, they decided, with the birth of their first child (they have two, both musical) that being in New York was fine, but bringing up a family could be a challenge. They explored living outside the City and finally settled in Lakeville, CT – near enough to allow the occasional trip for business, but well into the land of clear air and open spaces.

When the opportunity presented itself for the two to combine their musical and theatrical talents in a tour that would last for 14 months, the attraction was strong. Joseph and the Amazing Technicolor Dreamcoat was about to be taken on the road. Tim Rice and Andrew Lloyd Webber’s blockbuster retelling of the story of Joseph, his brothers and their sojourn in Egypt needed a casting element that could not be feasibly packaged in New York – 50 children singing and dancing.

Joanna and Donald had experience teaching song writing and performing to children in and around New York City. The road show needed a couple to handle selecting, training, encouraging, choreographing, and presenting 50 children in each of the 26 cities of the tour. In fact, two couples were needed, since the training time consumed a week before the tour came into town, so two couples would “leap frog” each other. The task was Herculean – arrive in a city, create a singing, dancing, acting chorus of young people over a week’s time and with an hour and a half blocking and rehearsal on stage with the touring actors, assemble the puzzle pieces in time for the opening curtain that night. Their five year old in tow accompanied by a nanny, off they went from coast to coast, delivering a children’s chorus for every performance.

But, domestic travel isn’t all that appears on their collective resume. Silent film festivals have appeared in countries all around the world. Italy, England, Russia, Thailand, South Korea. The stamps in their passports reflect the breadth of the interest in bringing musical life to the screening of classic silent films. Donald’s orchestral score for the 1916 version of Sherlock Holmespremiered on the famous Odessa Steps, made famous in the classic Battleship Potemkin for over 15,000 people.

Being premier musicians is not enough to recommend artists to score silent films. There must be a precise sense of timing, a true understanding of plot and sub-plot and a repeatable flair for the dramatic. Donald Sosin and Joanna Seaton have all of those things and more. Spread across a shelf in their home is a parade of over 50 compact discs of their original music, with more to come.

The number of live performances by Joanna and Donald has well exceeded 3000. Their talent has been applauded in every major film festival and museum archive. As long as the magic of brilliant silent films and engaging live performances exists, their journey continues. 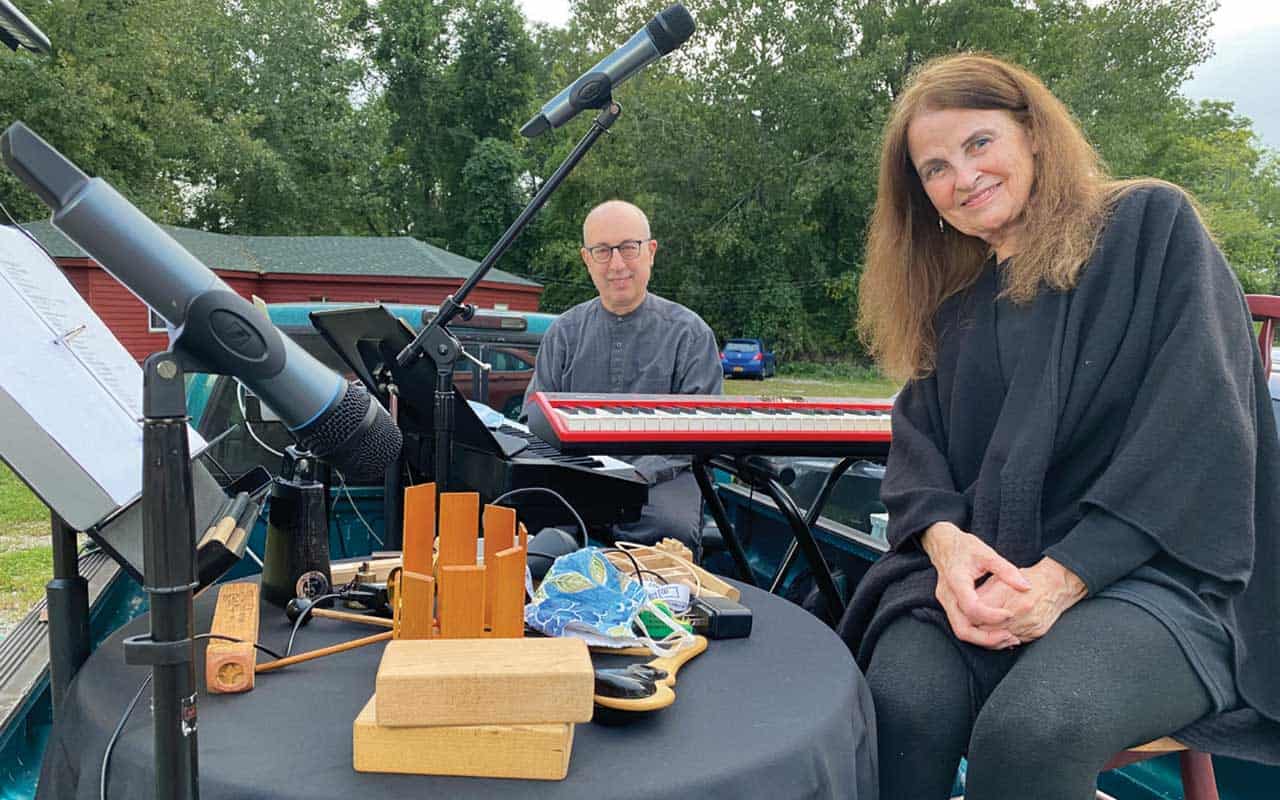 Explore the magical work of Donald Sosin and Joanna Seaton at their website, www.oldmoviemusic.com.