All this extra time on my paws has me thinking of my younger days, about a decade ago if you want to get a little more specific. Crazy how time flies and how many cat lives I’ve used since then, but I’ll never furrget my bar(n) days.

You see, I was quit literally raised in a barn. When my purrents adopted me, they were living in an apartment above a horse barn. I of course have always been an indoor kitty, but my feline furriends, who would hunt real mice for a living, used to sneak in every now and then. My buddies and I always had a good time, but they were a bad influence on me, fur sure.

We’d trade stories about the indoor vs. the outdoor life, they dared me to sneak outside once (which I actually did and it made the fur on the back of my neck stand up!), we chased each other up and down the stairs to see who could kick up the most fur balls, share some party mix treats, feasted on table scraps furrom the horse enthusiast, have a furriendly competition of who could catch the most flies, make bets on who was going to date the most beautiful lady at the bar(n), and even dabbled in a bit catnip.

Ha! We were such rebels!

Purrhaps my favfurrite past time with the guys was going out (and by out I mean downstairs to the lunch room) to have a little drink of…water and if we’d hit the catnip a little too hard, we’d meow for a cold glass of milk. Talk about a wild cat! I was really becoming a milkoholic, but I’ve since cleaned up my act – purrobably because I am older and wiser, but also because we haven’t lived there in almost three years. I’m purrroud to say I am about two years sober…but still have an occasional craving for catnip.

I still try to keep in touch with my old buddies and see how the bar(n) life is treating them. But little do they know, I ended up getting the number of the most beautiful girl in the world, who just happens to live at the horse trainer’s residents – purractically a stone throws away from the barn. They would be SO jealous! I guess that means their hunting skills were never as good as they purrtrayed them to be. But you know what they say, what happens at the bar(n), stays at the bar(n). 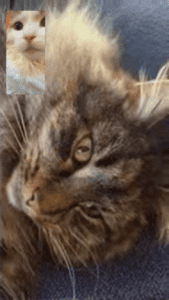