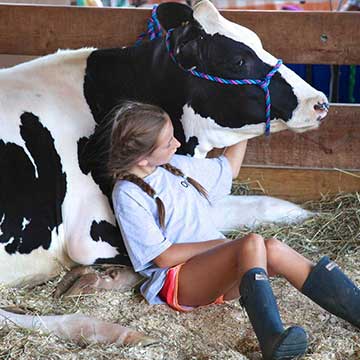 There is a lot to be said about the terms “routine” and “tradition” after the collective experience of 2020. For over a century, generations of local families have fastened themselves to the tradition of attending the Dutchess County Fair so much so that the annual event has ingrained itself as a cultural routine throughout the Hudson Valley. Each year, as August draws to a close and summer enters its twilight, locals find solace in the possibility of enjoying one final taste of the season’s nectar as they collect friends and families and head to Rhinebeck to take in summer’s traditional curtain call.

Whether its heading to the 4-H stand to savor a distinctly delicious milkshake while wandering through the variety of stables to get a one-of-a-kind visit with local farmers and their sheep and cattle, unapologetically abandoning our summer diet plans in favor of indulging in a variety of fried fare, testing our inner moxie on the many rides and games who’s colorful neon light up the late-summer night, or perusing the latest creations from local artisans, folks unwittingly weave themselves into the fabric of local tradition simply by attending the fair each year. As with many traditions, 2020’s unrelenting nature forced the Dutchess County Fair to shutter its gates, making for a painful capstone on a woefully suppressed summer in New York State. The bitter taste of the fair’s absence last year has served to foment an historic sense of excitement at the possibility of its return this year – and thankfully, that time has come.

According to the Poughkeepsie Public Library District, the fair originated from the Dutchess County Agricultural Society which was formed in 1842. The purpose of the society was and still is to “continue the development of agriculture, household manufactured items, and domestic produce.” The first official fair was held in Washington Hollow in 1842. Many followed in that same location which is currently occupied by the barracks of the New York State police. The fair was also held off and on in Poughkeepsie in the area of what is now Mill and Catherine Streets.

During the 20th century, the fair suffered from a considerable number of financial challenges. This caused the cancellation of the 1916 and 1918 fairs. In 1917, the fairgrounds in Poughkeepsie were used to mobilize people on the home front on behalf of the men involved in the war effort.

In 1950, the reincorporated Dutchess County Agricultural Society, Inc. purchased Springbrook Park and renamed it the Dutchess County Fairgrounds. The facility has since grown to 147 acres. Construction on the fairgrounds over the years has been constant and impressive. Still, despite two World Wars and Hurricane Irene in 2011, the effect of cancellation was felt as hard as ever given the impact of 2020.

The fair’s return in 2021 is not only a signal of one painful chapter being closed, it also remains a testament to the resilience of those communities that occupy rural New York. Vicki Imperati, administrative operations manager for the Dutchess County Fairgrounds, took a moment to ponder the fair’s impact on the community, the painful decision to close last year and what to expect from this year’s triumphant return.

How did you and your husband Andrew become involved with the fairgrounds?

Andy’s father was both a farmer and a director of the Dutchess County Agricultural Society. Growing up, Andy enjoyed showing his beef cows at the fair for families in our area. Andy went on to attend SUNY Cobleskill and graduated with an Agricultural degree. After college, he came home and ran the family drywall and construction business for a time. While Andy was working his way through college and starting a new career, I was working for the Red Hook Central School district and like many folks, used to take vacation time in order to work at the fair.

Our paths crossed at the fair in 1991 and we married in 1993 so the fair is undoubtedly an integral part of both our lives. We briefly moved to Montana but moved back after only a year. Soon after, fair manager Tom Odak offered me full-time employment as the superintendent of entries during the fair, and in the office during the off-season. Tom reached out to Andy when the existing horse stalls in the barns needed to be repaired. What was supposed to be a two-week job, turned into full-time employment for Andy so the fairgrounds feel like a kind of home for both of us.

How would you describe the fair’s impact on the agricultural and artisan community locally?

The original goal of the Dutchess County Fair, and what has become part of its legacy, is its mission to bring people together to show off their agricultural products, be it livestock, vegetables, grains, quilts or homemade goods.

Today, the fair remains a showcase for people to learn about where their food comes from and how it’s produced. What makes the Dutchess County Fair such a constant tradition in our area is its presence as a place where people gather and bring the community together through the sharing of knowledge, products, and memories of fairs past.

How did you and the team come to the decision to postpone the fair in 2020? How difficult was the decision? Were there similarities to the events surrounding Hurricane Irene in 2011?

Together with management, our board of directors made the decision based on the safety of all of our exhibitors, vendors, staff, and patrons. Much of what played a role in our final decision had to do with what we knew in June of 2020, it was the only safe decision to be made. Given how the rest of the summer unfolded, we still feel as though safety was rightly our top priority.

Still, it was one of the most difficult decisions we’ve had to make. In 2011, after Hurricane Irene, though it was certainly devastating for many, we were able to keep the fair open until that Friday evening before the decision was made to close and again was based upon the safety of everyone here. Last year, it was heartbreaking. Knowing that decision would affect so many livelihoods while understanding that the health risks were simply too many – it was devastating for all of us.

Were there ever any doubts as to whether the fair would make a comeback this year?

Yes there were doubts, I would be lying if I said anything different. For a painfully long time, we were uncertain if restrictions would be lifted or not, how long that would take, and how we would go about navigating the fair even if they were.

While we did make proactive plans during the shutdown, everything was tentative. We waited for word from the state government that we could proceed, stayed positive and hopeful and when the news finally came that the fair would be a possibility, we were overjoyed for the community.

Describe the process of planning the 2021 Dutchess County Fair. How important do you feel it was for the fair to come back?

Planning for the Dutchess County Fair traditionally begins while the previous year’s fair is still occurring and is subsequently a year-long process. We started preliminary planning in January in the hopes that we would be able to open. Everything that could be pre-planned, was done while we waited for guidance from the state to move ahead. Some decisions were made early on. A few of those included one way traffic patterns, the elimination of high-touch or hands-on interactive displays and of course, wider aisles will remain in place this year.

Through it all, everyone held on to one singular notion in order to help make this happen – like every other business that was affected by the pandemic, we needed to open.

Are there any other changes to the fair or its operations this year and what do you see for the fair moving forward?

The AgriVenture Tent, Hands on Horses and the Entertainment Tent have all been put on hiatus for this year. Tickets as well are currently only available online at dutchessfair.com. Again, we made a high priority to limit the amount of high-touch activities while still keeping the spirit of the fair present.

Looking at fair attendance numbers from around the country, we expect to have large crowds this year and of course the weather will play a role in that as well. We hope that it will be a successful year for everyone all the way around because that is what we all need right now – a little fun, a little togetherness, a little community tradition.

The 2021 Dutchess County Fair will be held from August 24-29, for more information or to purchase your tickets, visit www.dutchessfair.com. All images courtesy of The Dutchess County Agricultural Society. 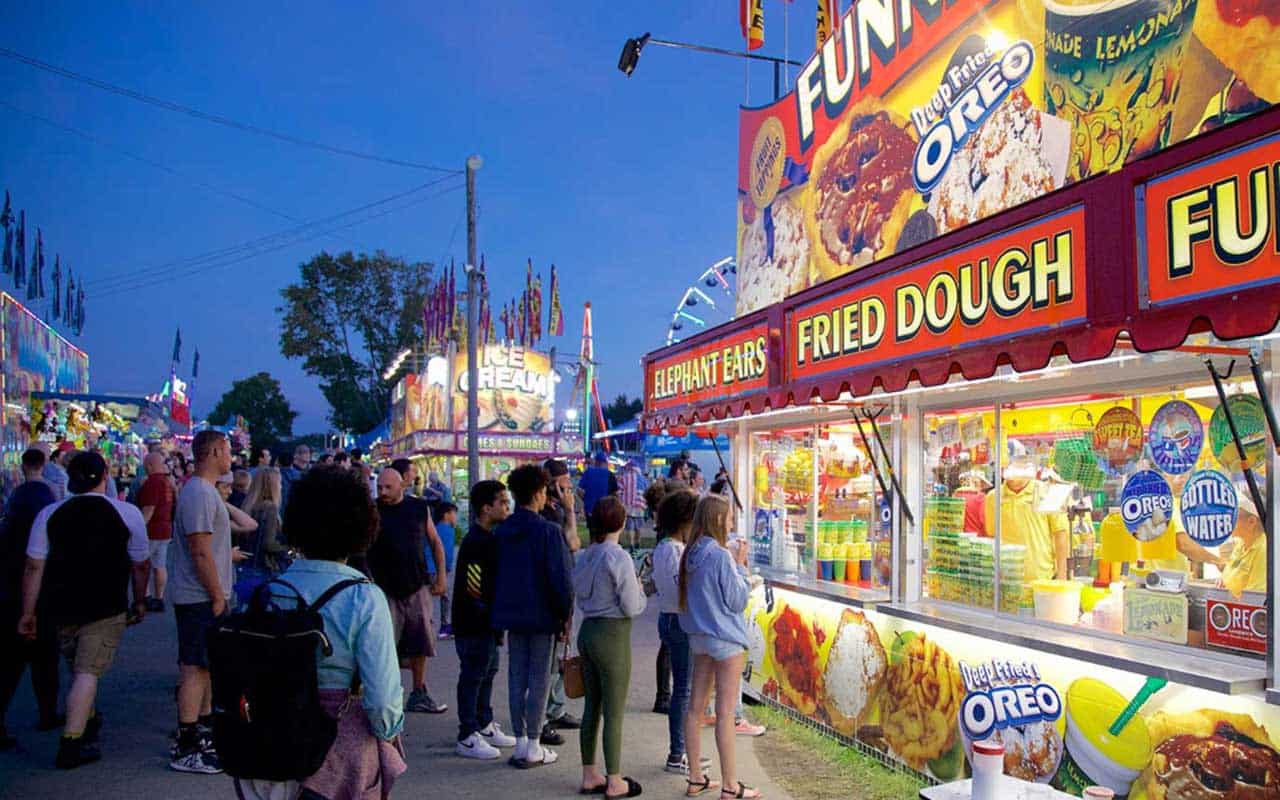