Artist Peter Fritsch finds realism in nocturnal landscapes. Beginning on Saturday October 5 and continuing through December 16, at the Burke Hall Gallery located at the St. John in the Wilderness church in Copake Falls NY, enthusiasts, visitors, and avid seekers of the alluring nightscapes of the backroads of the Hudson Valley will be equally thrilled by Night Walks presented by local artist Peter Fritsch. Peter Nicholas Fritsch (a.ka. Nick) began his celebrated life as a painter studying both painting and drawing at the School of Visual Arts and the Art Students League in New York City. Under the tutelage of such venerable artists like Herb Katzman and Robert Cenedella, Fritsch began to develop his own unique style based on the traditions of 20th Century American Realism and, of course, drew much of his inspiration from the hushed night roads and sweeping nocturnal skies of Copake NY. Fritsch’s streetscape paintings mysteriously alluring for their shocking near photo-realism as they are for their general ambiguity as to the nature of nights out in the countryside. As desolate as they are at times equally romantic, Fritsch has successfully married the two most common conceptions of nighttime that has made it such an attractive mystery to humankind for millenia. Fritsch’s realism doesn’t stop with his style either, as his subjects often include historic and fascinating local sites throughout Copake, including the abandoned Copake Depot and the former Knox and Wilsey store. Fritsch explains his inspiration to commune with the night through art comes from night walks in the town with wife Lesley Doyel and their dog Munchkin that “evokes both a sense of quietude and a striking reflection of reality.” Through Fritsch’s exhibition, perhaps viewers will again remember why the night remains the most attractively mysterious parts of the human experience.

The Artist Reception will be held on October 5th at 5pm at the Burke Hill Gallery. After which, the exhibition will be open Sundays 11-1pm and by appointment. For more information contact Lucy Eldridge at (518) 329-0530 and see Peter’s work at peternfritsch.com 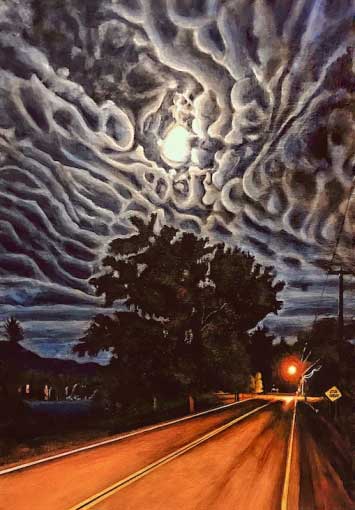