Not a Fore Gone Conclusion

Are you someone that would like to combine high investment returns and your favorite outdoor hobby? Have you ever considered buying a golf course? Could it possibly be a good idea or just a sand trap? Main Street Magazine’s real estate feature explores the trends in golf course real estate, the history of local golf courses, and surprising good news.

Still in the rough

Not surprisingly for a game that has complex score keeping, the golf industry publishes precise national annual statistics on all aspects of golf course activity. The results for 2019 may make you change your mind if you are considering buying a golf course. Nationally in 2019 there were only 96 golf course sales in the whole country – the least since 2006 – with a median price of only $1.4 million – according to Leisure Investment Properties Group. (This number does not include large portfolio sales, large golf resort sales, or courses sold for housing).

Every buyer is looking for something different. Larger institutional investors are looking at private clubs, usually outside of larger metropolitan areas with attractive demographics. While prestigious golf membership clubs are still in demand, most golf courses that go up for sale are marginally profitable, if at all, because of lack of demand from golfers and excess of supply of golf courses.

Private individual golf loving buyers focus on smaller operations that they believe they can improve through better management. Like any acquisition you have to understand the underlying fundamentals of the property, and the local market and what needs to be changed to increase profitability. Robert Waldron, golf advisor to LIPC a division of Marcus & Millichap Real Estate Investment Services, explained that transactions involving bank financing are on hold as banks assess political and COVID risk, anticipate December 2020 regulatory audits, and deal with the complexity of PPP loans.

The delayed sale of the 18-hole Egremont County Club at 685 South Egremont Road in Great Barrington, MA, might be an example of the difficulty of selling a golf course in the current market. Offered for sale since 2012 at $2.5 million and listed by Massachusetts’s realtor Lance Vermeulen in April 2016 at $1.8 million, the course was closed in May of 2020 because of lost revenues due to banquet, wedding, and event cancellations. It is the third Berkshire golf course to close in the last year according to the Berkshire Eagle.

The decline in the sale price of golf courses is due primarily to shifting demographics, changing recreational trends, oversupply, and even bad weather. The industry has been in decline for over ten years. Rounds played, a key metric, have been going down, the number of open courses have decreased and the average age of golfers has gone up. So-called playable hours, the total number of hours that golfers could potentially play, were down again last year after the fourth wettest year on record. Golfer participation continues to decrease as players age and younger potential players choose biking, kayaking, hiking, or just going to the gym.

There is still an oversupply of golf courses from the mid 1980s to 2005 when an estimated 4,000 courses opened and there were waiting lists for club membership. Today the National Golf Foundation estimates that over 180 golf courses closed last year alone. One area casualty was the 140 acre Dutchess Golf Club in Poughkeepsie, NY, which was purchased in November 2015 for $2.5 million, announced its closure in December of 2016 and ultimately became a skilled nursing facility.

Given that most golf courses aren’t very profitable, many investors think of converting them to residential or commercial real estate. Because of zoning, change of usage, neighbors, and environmental restrictions, this often takes years and success is not guaranteed. In Great Barrington, one developer had hoped to purchase the Egremont golf course and turn it into a solar installation. That idea was quickly rejected by the town and the deal was scuttled.

New York City developer, the Durst Organization, purchased the Pine Plains, NY, 2,652-acre golf course property belonging to ice cream pioneer Tom Carvel in 2003. The town imposed a moratorium on any development to give it time to develop a zoning plan after Durst proposed building 951 units, less than half of what Carvel had envisioned 40 years earlier. In 2009, town zoning restrictions were formally adopted and in 2011 Durst filed a second plan to build only 591 units. Preliminary discussions began but ultimately the plan lay dormant for seven years.

Durst has now submitted a sustainable recreation-oriented resort for consideration with 1,397 acres of open space and is preparing a Sketch Development Plan for consideration by the planning board. Durst representatives indicated to Main Street in a phone interview that details like the size of any hotel or the golf course are still being evaluated by the Durst team. They currently have no target date for presenting the proposed development plan. Steve Ekovic, head of marketing for LIPG, was quoted as saying, “I’ll have people call me and say, ‘Hey Steve, I want to buy golf courses because I want to convert them.’ I say, ‘Okay you’re like speculator number 7,000 with that in mind so just know, there are only a few such courses out there.’”

A tale of two courses

The histories of most golf courses are unique and intertwined with a love of golf, emotion, and the realities of running a golf business. Under Mountain Golf Course in Ancram, NY, was created by Patricia MacArthur’s father as he gradually converted the family farm into a natural nine-hole course set in the Taconics near the border of Columbia and Dutchess County. He started with three practice holes incorporating the natural landscape of the valley. By 1977 he had expanded to seven using his family to help out and then added two more holes.

Created without a big name golf course architect, the executive course has a small snack bar and a liquor license. Currently it hosts three local leagues, but like all golf courses has seen declining numbers of golfers and rounds of golf played. It’s still family run with seven to ten seasonal employees. Asked if she ever considered selling, MacArthur admitted the course would probably only sell for the price of the land itself – although Covid has made this season the best in a long time.

The colorful history of Silo Ridge began when John Segalla, owner of Amenia Sand and Gravel, was rejected for membership in an exclusive local golf club. His response was to build his own golf course. In 1987 he purchased a 675 acre former dairy farm for $1.15 million between Route 44 and Route 22 in Amenia, NY. Construction started in 1989 and by 1992, and an estimated eight million dollars later, the public golf course was opened with 18 holes, a 400-person banquet hall, two restaurants, a pro shop, and a clubhouse. The course was immediately busy with 200 to 300 golfers a day.

By 1997, Segalla agreed to sell the property for $14.25 million to Frank Zarro, who was later convicted of grand larceny. After a series of false starts the property eventually sold for $8 million in 2013 to Discovery Land Corporation of Scottsdale, AZ, a developer of private residential communities and resorts. The exclusive, gated residential community offers its residents, many of them young families, an expansive organic garden, a just opened 11,000-square-foot multipurpose family entertainment and activity center, and a very playable golf course with “comfort” stations featuring free fine food, snacks, and drinks. It’s been hugely successful because it offers so much more than golf  – and you don’t have to wear a shirt if you play. Over 80 sales have been closed so far totaling almost $200 million dollars. Two to four bedroom condominiums start at $2.7 million and cottages at $3.8 million.

Is the pandemic the cure for what ails golf? Early results for golfing trends in July and August 2020 showed gains in rounds played and revenues. COVID took away many other activities that compete for discretionary time and income with golf. The question becomes whether golf can maintain these new levels of activity. MacArthur, the owner of the family run Under Mountain Golf Course in Ancram, wonders whether the increased number of rounds played by new comers, work-from-homers, second home residents staying in the country, and long-time members playing more golf will continue. She believes that Under Mountain’s business model, which operates with a very limited pro shop, and a modest snack bar with a liquor license is perfectly positioned for socially distanced golf. Golf industry veteran Waldron has observed that operating margins are also improving at large clubs as dining facilities are closed or menus are limited, eliminating lower margin business and focusing just on golf.

If despite falling golf participation, bad weather and lack of financing, you still want to buy a golf course, there is one nearby for sale. The Stonybrook Golf Course in Litchfield County, a public nine-hole course on 64 acres, includes a clubhouse, a colonial home, a separate guesthouse, and ponds with an asking price of $2.75 million. Potential buyers are considering other uses as a horse farm, a vineyard, or a private family compound. 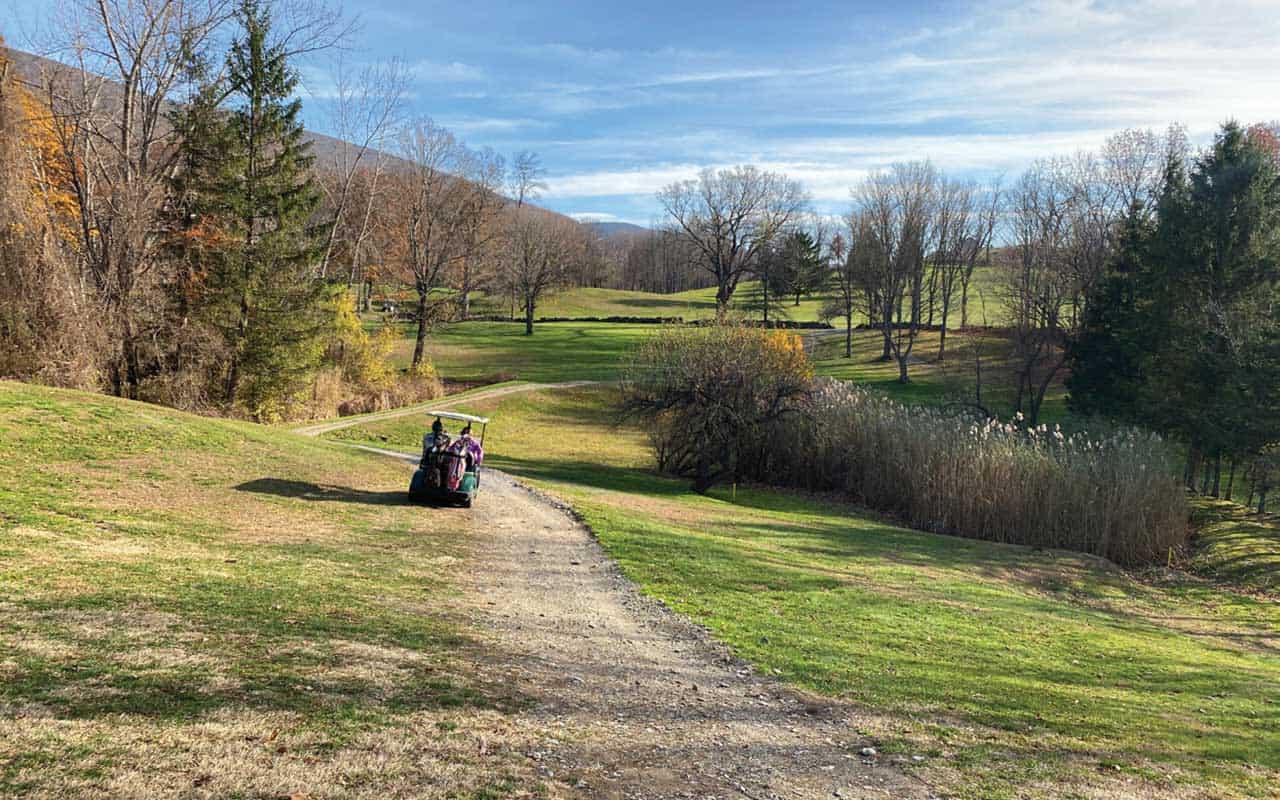 Christine Bates is a registered real estate agent in New York and Connecticut with William Pitt Sotheby’s and has written monthly for Main Street Magazine since it’s first issue.