As I have mentioned before in the pages of this magazine, I am not one of those folks who waits around all year for pumpkin season to arrive. This is not to say that I have anything against fall. I adore autumn and all of its accompanying holidays and sweets, but I am not a huge pumpkin fan (sorry haters) and most definitely not a fan of pumpkin pie. However, I AM a fan of preparing and serving up sweets that appeal to the masses (not just me), and so once the temperature begins to drop, I am constantly on the lookout for creative, non-“pie” ways, to use pumpkin.

This might take the form of pumpkin scones or pumpkin donut holes or even pumpkin whoopie pies (filled with cinnamon cream cheese filling, if you must know), but if we’re talking Thanksgiving, it takes the form of a black-bottomed pumpkin tart. Now, I, for one, think the combo of chocolate and pumpkin is pretty special, unusual yes, but also extremely scrumptious. In fact, a few years ago, I contributed a pumpkin sheet cake with chocolate bourbon buttercream to the November issue, and the recipe can be found on my site, if you’re curious. 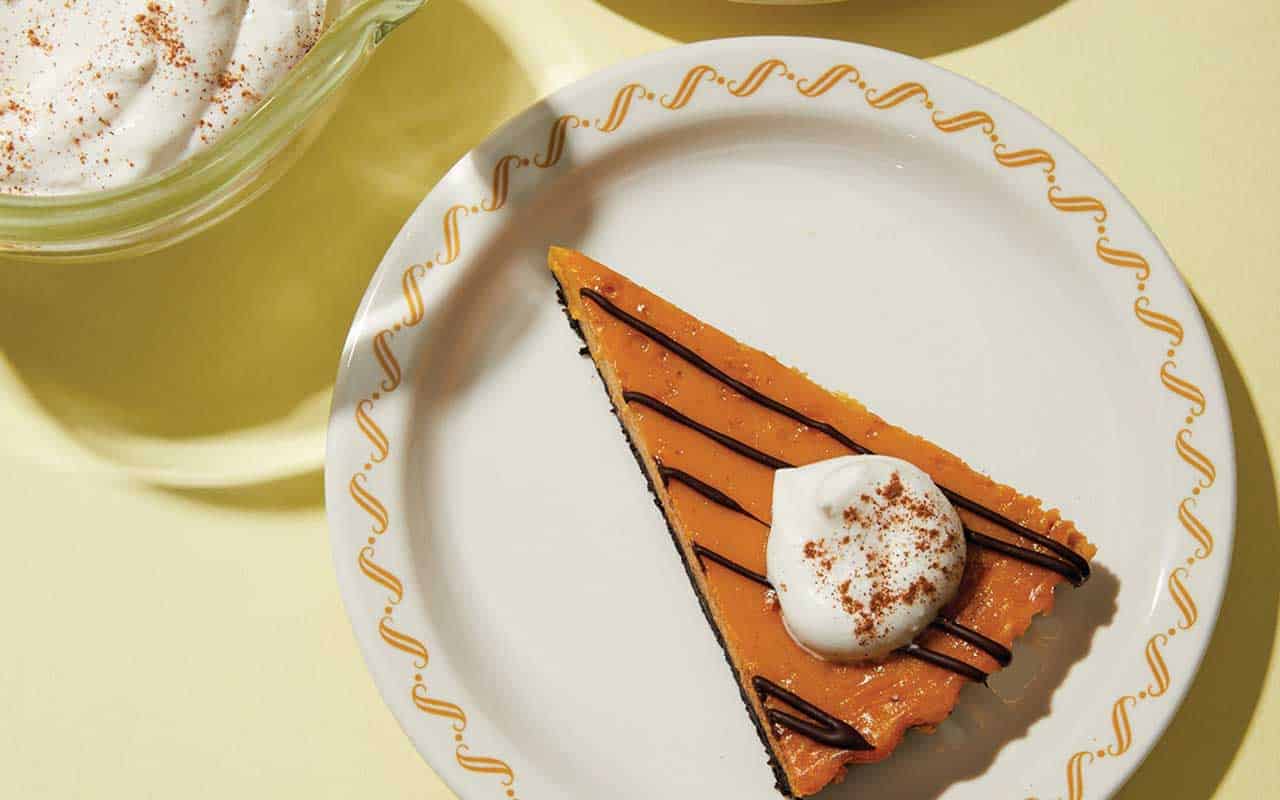 Here, the chocolate comes in two forms: a cookie crumb crust and a drizzle atop the finished tart. The crust I love, not only because it is deeply chocolate-y, in that almost-bitter chocolate-wafer cookie way, but also because it is so easy to assemble: crushed cookies are mixed with melted butter and a bit of sugar and pressed into a tart pan with a removable bottom. You can pull out your food processer to grind up the cookies if you so desire, but you can also place them in a zippered plastic bag and smash them with a rolling pin (a bit more cathartic, if you ask me).

And the filling, too, is easy to pull off, and calls for all that which goes brilliantly with pumpkin: heavy cream, brown sugar and warm spices. Finally, because this is a tart, and not a pie, the ratio of filling to bottom crust is – in my opinion – just right. Not so much filling as to overwhelm, but just enough so that every bite includes creamy, yet light, pumpkin custard, and crispy deeply chocolate-y crust (the combo of the dark brown crust with the bright orange pumpkin is pretty nice too).

Finally, because to me a slice of tart (or pie) is not complete without a dollop of something atop or alongside, I suggest making an easy cinnamon whipped cream to serve with this cute little black-bottomed number. Softly whipped is best, so a spoonful truly collapses a bit over each slice and a final dusting of cinnamon over all, would be extremely welcome, just sayin’.

This recipe originally appeared in my second cookbook, The Vintage Baker.

For the crust, place the wafers and granulated sugar in the bowl of a food processor fitted with the metal blade and process until finely ground. Add the melted butter and process until combined. Transfer the crumbs to a 9-in round tart pan with a removable bottom and, using your fingers, press the crumbs evenly on the bottom of the pan and up the sides. Place the pan in the freezer for at least 30 minutes or up to three days, tightly covered in plastic wrap.

Bake the crust for eight to ten minutes, rotating at the halfway point, until dry to the touch and slightly puffy.

For the filling, in a large bowl, add the cream, eggs, and vanilla and whisk to combine. In a medium saucepan, combine the brown and granulated sugars, pumpkin purée, salt, cinnamon, ginger, and nutmeg and cook over medium heat, stirring constantly with a wooden spoon, until the mixture bubbles and sputters. Continue to cook and stir the mixture for another five minutes.

Whisk the pumpkin mixture into the egg mixture, a little at a time so it does not curdle the eggs. If lumpy, strain the mixture through a wire mesh sieve, and transfer to the prepared tart pan. Do not fill the tart past the edge of the crust.

Bake for 20 to 25 minutes. Begin checking the tart at 15 minutes; it is ready when the center just jiggles the tiniest bit. Let cool completely on a wire rack on the counter before placing it in the refrigerator for at least four hours or up to overnight, tightly wrapped in plastic wrap.

For the chocolate drizzle, place the melted chocolate in a zippered plastic bag, cut a very tiny hole in the corner of the bag, and drizzle the chocolate over the tart. Let set before serving.

For the whipped cream, place the cream in the bowl of a stand mixer fitted with the whisk attachment and whisk on medium to medium-high speed until the cream begins to thicken, two to three minutes. Add the confectioners’ sugar, vanilla, and cinnamon and continue whisking until soft peaks form.

Serve slices of tart topped with a dollop of whipped cream.

The tart will keep, tightly covered in plastic wrap, in the refrigerator for up to three days. •