We are about to jazz up your Thanksgiving dessert table with this Pumpkin Chiffon Pie recipe! Pumpkin Chiffon Pie is just like traditional pumpkin pie… but different. It’s lighter and airier, with a texture like a cloud. A chiffon dessert gets this airiness from beaten egg whites which are stabilized with gelatin. The graham cracker crust is essential, offering a crunchy contrast to the mousse-like filling. It does not get soggy beneath the pumpkin chiffon and elevates it just that extra bit more than a traditional pumpkin pie. Graham cracker crust is a must with lemon meringue pie too. Just sayin’. Also note: roughly chopping the pecans for the crust is recommended over blitzing them into crumbs like the graham crackers.

While making this, Olivia thought it was rather easy, whereas Caroline didn’t think it was quite so simple. There are a few steps to this pie, but each doesn’t require too much effort and no part is difficult. But you will have to wash a few dishes. The cooling of the filling takes the longest amount of time. But while it cools, you can make the whipped cream and have that ready ahead of time. Again, and as always, we recommend using homemade whipped cream.

The only baking that is required for this pie is the crust; a mere eight minutes, meaning you’ll have plenty of oven space for the traditionalists that only want a slice of regular pumpkin pie, which we are also huge fans of.

We have a very small family. And we mean SMALL. Almost all of our holidays and celebrations consist of nuclear family only, because there isn’t much outside of that. Regardless of the number of people at our Thanksgiving, we always make a pumpkin pie, apple pie, pecan pie, and something more experimental like our pumpkin chiffon. That leaves our pie to people ratio at 4:5… And that’s just how we like it.

1 cup of heavy cream (if covering the entire pie). We only used a ½ cup to decorate the top.
¼ cup of confectioners sugar (if covering entire pie) 1-2 tbs or to your liking if just decorating
1 tsp vanilla (covering) or 1/4 tsp (decorating)
¼ teaspoon of ground cinnamon

Food process (or crush in a bag) graham crackers, and chop pecans.

In a medium bowl combine graham cracker crumbs, pecans, brown sugar, and butter. Mix well. Transfer into a 9” pie plate and pat mixture into the bottom and up the sides of the pie plate. Bake for eight minutes and let cool.

In a medium saucepan, combine gelatin, ½ cup of granulated sugar, cinnamon, ginger, nutmeg, and salt; mix until combined. Whisk together the egg yolks and the half and half. Pour into saucepan along with the pumpkin. Stirring constantly, cook over medium heat until mixture thickens; about six minutes. Pour into a shallow bowl. The shallower the dish the faster it will cool

Refrigerate until cool, but not set.  While the pumpkin mixture cools, whisk the egg whites until stiff but not dry.

Fold the whisked egg whites into the cooled pumpkin mixture.

Pour into crust and put pie into fridge. Refrigerate overnight or for a minimum of four hours.

Whip the heavy cream to soft peaks. Gradually add the sugar, vanilla, and cinnamon until the peaks hold their shape.

Once cooled, pipe a decoration around the edges or cover the entire pie with whipped cream. Decorate with pecan halves or bits and sprinkle with a tad more cinnamon if desired.

We hope you enjoy and have a Happy Thanksgiving! • 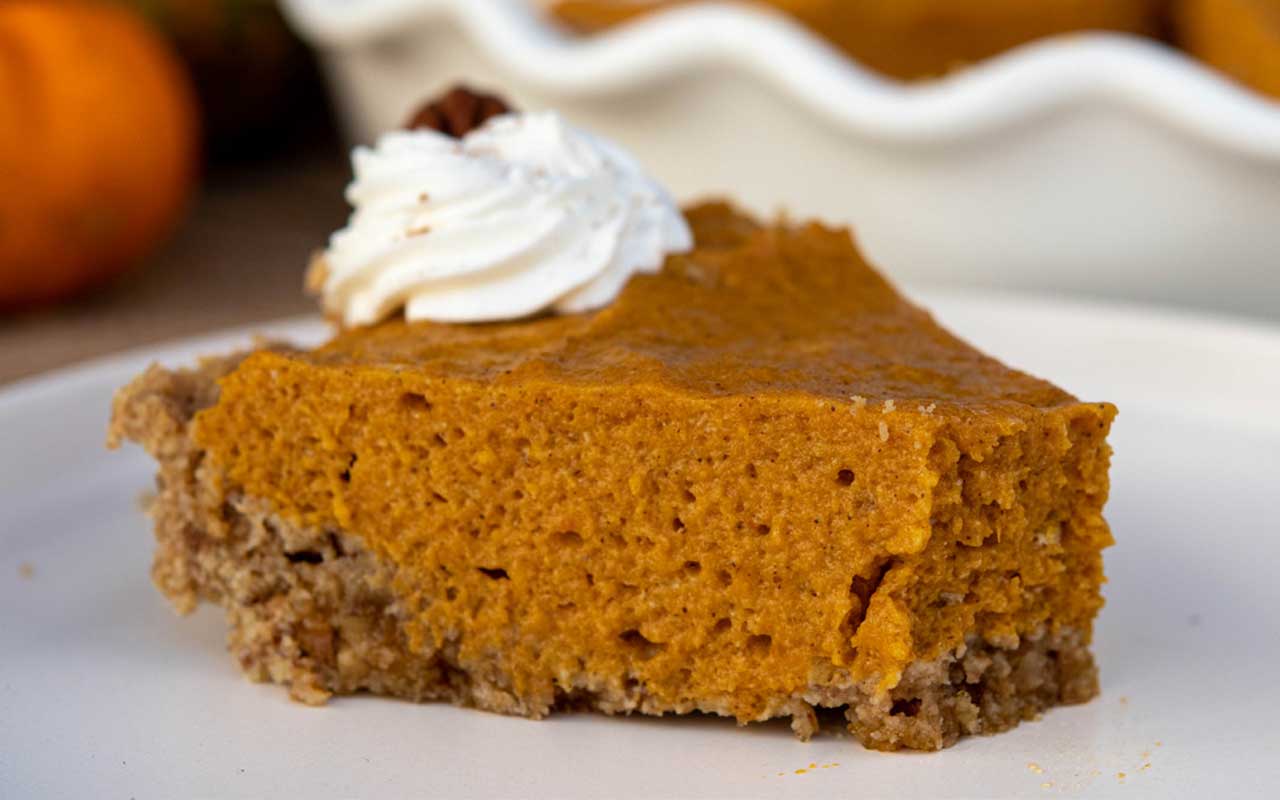