One Family’s Tragedy Helps Restore Hope In A Community 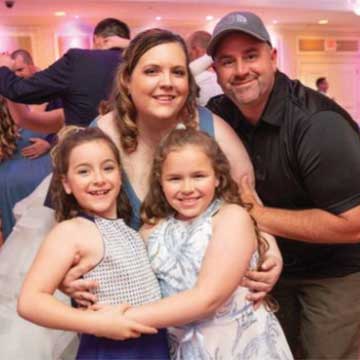 As we emerge from the hazy fog of 2020, its lessons shall not soon be forgotten. Tragedies in every community across the globe have been impossibly innumerable – almost too many to bear. However, through the scourge of a lifetime’s worth of fearsome challenge has been forged a renewed cast-iron will. A will and a willingness to not only stand and face tragic circumstances, but to do so with the unwavering support of friends and neighbors. The kind of support that had never left, but rather had been tucked away behind the modern social media divide – like a beloved family heirloom waiting to be rediscovered.

So it was for the small town of Copake, NY, when this past summer one family’s world was unexpectedly dealt a tragic blow. What, by any reasoning, could have been a loss so devastating as to sink those impacted into unimaginable depths, became a testament to the uplifting will of a community. While the impact of their tragedy will no doubt leave a scar on the hearts of those involved, what was once the specter of a seemingly endless nightmare blossomed into hopeful optimism within the loving embrace of those willing to give back without question.

Small towns like Copake have since become a microcosm for the rallying cry of hope and togetherness that grows louder with each passing week in America. In her own words, Copake-native Chrystal Albright recounts how her life changed tragically over the course of seven months, and how the outpouring of community support has given her a renewed sense of hope for the future.

“On July 2, 2020, our world was turned upside down.” To allow this story to be told in any other way besides in her own words would do a disservice to the most poignant moment in Chrystal Albright’s life. Chrystal somehow found the strength to recount the events of the early morning hours that would forever change her and her family – a fact that will no doubt come as little surprise to those who know her.

“On that morning, not only did I lose my other half of over ten years, Calvin Valyou at just 44 years of age, but four children lost a father. Two children, Patrick and Claire, were from a previous marriage and together we had nine year old twin girls Layla and Aubrey. His mother also lost her youngest child on that heartbreaking morning.”

Calvin, who was better known by his friends and family as “Butter” was born on June 9, 1976 in Sharon, CT, and from a young age was known by many as an extraordinarily talented mason. For nearly a decade, Calvin worked for Pondside Nursery in Hudson, NY, where he threw himself into his passion for craftsmanship. During his life, Calvin was well-known for being an incredibly hard worker as well as an avid hunter, fisherman, cook, and storyteller.

“He had the amazing ability to light up a room and make everyone laugh with his stories,” says Chrystal. “As I sit quietly from time to time, the little bits of his personality come sharply into focus. Calvin was silly, smart, loud, and something of a know-it-all individual, but it was his children who he felt were his greatest accomplishment.” Mr.Valyou was warmly regarded as a generous man who was well-liked by all in the community – making the morning of July 2 all the more heart wrenching for Chrystal and her family.

Chrystal recounts solemnly, “Calvin went in June of 2020 for what was supposed to be routine hernia surgery. Unexpectedly, he ended up staying in the hospital for twelve days and required a second surgery due to an infection. The doctors were aware that the hernia was large but the situation turned out to be much worse than they could have anticipated. When Calvin was finally released, he was home for a little over two days before tragically passing away. I was awakened at around 2:40 in the morning and found Calvin complaining of leg pain. I managed to get him into his favorite chair and proceeded to call 911. Calvin would take his last breath before the rescue squad arrived at our house. I will never forget watching him fight for his life. The incredible folks from the Copake Rescue Squad tried to revive him but to avail – he was gone. I later found out Calvin abruptly passed away from severe pulmonary embolisms, which are described as large blood clots in the lungs.”

Love by more than one name

The abrupt loss of Calvin left a sudden, jarring chasm in Chrystal’s life, and unfortunately grief wasn’t the only obstacle she would have to overcome. Due to Calvin’s extended battle with his hernia, Chrystal was forced to go through multiple insurance agencies to help cover the costs of surgery. After being denied multiple times and ultimately postponing Calvin’s surgery, Chrystal was finally able to find an insurance company only to have the surgery postponed once again due to the spread of COVID-19. On June 19 he finally underwent the very intense and complicated hernia surgery. During that time, Calvin was not allowed any visitors due to the pandemic. He was eventually discharged from the hospital and sent home two days before that fateful Thursday morning in July.

However, like most stories from our area whose origins find themselves deeply rooted in personal tragedy, it is the decisive and unconditional response from the surrounding community that helps families like Chrystal’s persevere.

“I couldn’t believe the outpouring of love and support we received from our community and even from people we had never met before in the immediate days that followed,” Chrystal recalls. “The community here in Copake and the surrounding towns as well as my family and close friends got behind us each and every day.”

In the immediate aftermath of Calvin’s passing, Chrystal’s longtime friend Samantha Leonard-Tilton organized a GoFundMe page that quickly raised over $21,000 of a $20,000 goal. “I am still shocked by the generosity of everyone who donated to the GoFundMe page,” Chrystal says. “But it wasn’t just financial support. The beautiful cards, food donations, meals, gift certificates, and unprompted visits we received revealed a new kind of love that I feel lucky to have experienced.”

It wasn’t only friends and neighbors who stepped forth to aid the grieving family either, local businesses felt compelled to show their love and support as well. The staff at Herrington Fuels, a local fuel-oil provider that has been family-owned and operated for over 70 years, offered to pay for Chrystal’s fuel. “They told me having to worry about keeping my home warm for the following cold winter months should be least of my concerns,” says Chrystal. “As a result of their kindness, I pay a budget every month, another burden I do not have to carry by myself.”

The Church Street Deli, located right in the center of Copake, once again showed why they have been a staple for local food in the area for decades. “The folks at the Deli sent us food the day Calvin passed for everyone who was here at home grieving alongside me and continued to refuse money in the days and weeks that followed.”

Chrystal also expressed her gratitude to Gary from the Copake gas station, “he has donated a tremendous amount, and every time the kids have gone into the gas station he gives them candy or sends it home with my sister if she goes in there.” Chrystal continued by saying, “Dad’s Diner has been great, giving a donation and gift card as well. Their waitress Colleen has twice donated a huge amount, the second time being on the day of Cal’s services, which made the GoFundMe fundraiser an even 20k – she wanted me to wake up and have a smile on such a hard day.”

Perhaps the most pivotal moment for Chrystal came when it was time to lay Calvin to rest. “If it were not for everyone’s support, it would have been very difficult to give Calvin a proper goodbye,” says Chrystal. “My unbelievable best friend Samantha sat down with me and helped me write his obituary. My mother was, and is my everything. She helped us get by every single day leading up to the funeral. One of Calvin’s former co-workers, Kenny Farwell, kept a piece of rock Cal broke and was no longer usable and came to the wake with a beautiful homemade rock picture frame with a photo of us inside. It was amazing what he did with it and where the rock had broken looked remarkably like a sunset. I stare at this frame, this bit of Cal, every darn day. I treasure that in a way that has become hard to explain.”

A shift in perspective

As she stands – like many – in nervous anticipation for what the new year may bring, Chrystal looks out into the world, family and community standing firmly behind her, with something only life’s irony could deliver from such devastating tragedy – hope.

“As hard as it is to comprehend life without Cal, it has become just as hard to describe how grateful I feel,” Chrystal says. “In the best way I can, I want to say one more huge thank you to everyone who was there for us, not just financially but in one way or another. Whether it was a call, message, or stopping by socially distanced. It was an indescribable experience and I am forever thankful to you all for forcing your light into such a dark time in our lives.”

As days pass, Chrystal takes 2020’s more subtle lessons along with her. “The past year has taught me so much,” she says. “I never would have thought I possessed the kind of strength it would take to get through each and every day after watching Cal pass. It took time to accept that I couldn’t save him. It taught me that my bad days weren’t so bad, and to take more than a few deep breaths every now and again. The most important lesson I have learned despite everything is that anything can happen. In the blink of an eye your life can change forever. What matters are the people who stand beside you through that inevitable change.”

So it is, in big cities, small towns, and households across the country. As we hunker behind the social walls we’ve built, retreat to our corners and close ourselves off, something remains gone but not forgotten. The unmistakable part of the human condition that blinds itself from opinion, favor, frivolity, and politics in favor of an unwavering need to support and, above all, connect with one another. As 2021 begins, perhaps it is now time to revisit the old shelf and take out that old heirloom, dust it off, and rediscover that something once again.•