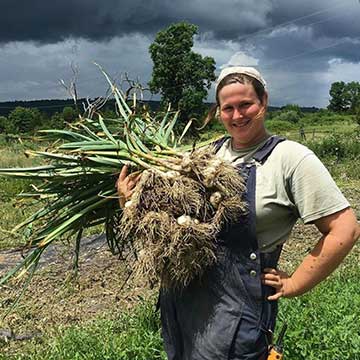 Hudson, NY, also renowned as “Upstate’s Favorite Downtown” is a riverside town that is home to 7,000 diverse residents. Its urban center boasts over 300 independently-owned shops, bars, bakeries, and restaurants. Its burgeoning new economy is rooted in food, the arts, and culture.

In 2014, Letterbox Farm, a collectively-owned and operated commercial farm opened in Hudson. It was founded by farmer and researcher, Faith Gilbert, who is the author of free publications, Cooperative Farming, a how-to handbook on forming collaborative farm ventures and A Guide To Sharing Farm Equipment.

Initially founded as a 2-acre hand-scale market garden, Letterbox went through some early changes when livestock farmers Nichki Carangelo and Laszlo Lazar started working with Gilbert the following year. The trio of farmers worked alongside one another for several seasons and collectively had a hand in shaping Letterbox into the diversified farmscape it is today.

The farm specializes in the small-scale, organic production of vegetables, greens, herbs, and flowers. It also raises meat birds (chickens raised for meat), laying hens, hogs, and rabbits on its plot of land that spans across 64 acres. Its land runs through picturesque scenes – from fields and woods to ravines and mountainside areas.

The rabbits are raised using a wire/pasture hybrid method. The poultry and pig feed hails from Stone House Grain in Hudson and the rabbit feed from Lutz Feed in Oneonta.

Gilbert is credited for selecting the Letterbox name, which proved to be an ideal moniker for the destination. “It’s just a silly, flexible name that doesn’t highlight any one individual or any one facet of the farm. It allowed the business to evolve – which it has done, and hopefully will continue to do for many years to come,” says Nichki Carangelo, farmer/partner, Letterbox Farm.

She is also the author of Raising Pastured Rabbits For Meat – An All-Natural, Humane and Profitable Approach to Production on a Small Scale and 21st Century Pastured Poultry – a Letterbox Farm Enterprise Guide, which is available for free on the Letterbox website.

According to Carangelo, who also manages the retail marketing, Gilbert’s tenure with Letterbox Farm recently came to a close, but Gilbert has remained on board for other initiatives.

Letterbox Farm’s current ownership structure now resembles more of a traditional family farm than a co-op. “Letterbox remains the combined effort of an invested team. We have been blessed to host many talented farmers over the past nine years and this farm is an ever-evolving reflection of the team that stewards it,” says Carangelo.

Lazar is also a key member of the Letterbox team. He grew up farming, is a Vo-Ag Center graduate and former FFA (Food For America) president, and spent six years as a park ranger for the Army Corps of Engineers. As Letterbox Farm’s equipment manager, he is also an integral member of the land management team.

This year, long-term team member, Maggie Reileingh has taken on the role of vegetable manager. The entire team is eager to see what Reileingh’s version of the Letterbox garden looks like.

As many as ten team members work for Letterbox during the height of the season. The staff roster includes Jae – a young, energetic teammate who has a degree in the culinary arts and a ton of hospitality talent. He has channeled new creativity into the farm.

Another stellar team member is Theo, who has a knack for organization, an incredible attention to detail, and a passion for community outreach. “This year, Letterbox will be a reflection of all these extraordinary talents as well,” says Carangelo. English sheepdogs, Moo and Daphne, are the farm’s unofficial farm greeters.

Foodies may order foods in advance via online shopping, but they’re also welcome to personally stop by to shop the inviting farm. The on-site farm stand will re-open in May and will remain in operation through December.

“Our favorite way to sell our food is through our ‘full diet CSA’ (Community Supported Agriculture) – a subscription service for food,” says Carangelo. It offers whole meals for as little as $59 per week. Customers are invited to sign up in advance. Once they’re in the system, the team at Letterbox will assemble a collection of the farm’s organic vegetables, greens, and eggs as well as the customer’s choice of pasture-raised meats, mushrooms, or fish to be picked up weekly or every-other-week.

A Summer Share membership is offered from June through October while a Three Season Share delivers food to members from April through December. Payments can be made in advance or can be made via automatic installments. Customers may also utilize the “flex credit,” which is allotted to each member at the beginning of the season. It offers enticing eats such as grass-fed lamb or fresh steelhead trout and lox. Each week, members receive a list of what’s available.

Letterbox’s food collection is also available for purchase at two farmers markets – one in Rhinebeck and the other in Bronxville. The Letterbox team also works with local restaurants and distribution companies such as the Good Food Farmers Network – a farmer-owned venture dedicated to connecting members with farmers. The Columbia County-based business delivers fully customizable orders to people’s homes or offices.

Since people have generally taken a hiatus from lavish farm dinners thanks to the pandemic, Letterbox has moved away from hosting weddings. A new plan is in the works – the team is eager to host a series of more accessible community events for 2022.

The roster of events includes fun movie nights out on the farm in July, August, and into September. Letterbox will also host a series of dinner pop-up events. Although the dates of the movie nights are subject to change, the current calendar includes July 1 and 15 as well as August 5 and 19, and September 2. In May, the Letterbox team will be asking its audience of community members to select the movies, using a bracket style voting system. Think March Madness-style voting for movies.

“We are also hoping to host a few local food trucks on our farm this summer, but we have not sorted out the details yet,” says Carangelo.

People are also invited to go spend the night at Letterbox. A spacious 19th-century farmhouse is situated on the 64-acre property. Located just two miles from busy downtown Hudson, the five-bedroom home sits on the working organic farm, which is brimming with flowers, vegetables, pigs, chickens, and rabbits.

Ideal for families and groups, guests are welcome to prepares meals in the large, open kitchen or barbecue under the twinkling stars. While there, they can also visit the animals, or lounge by the fire pit. Guests have private access to the entire house and the farmhouse yard along with shared use of the open fields and woods. One hundred percent of the earnings from the accommodations are used to support and sustain Letterbox Farm.

Ongoing research always depends on who is working at Letterbox and which interests are nearest and dearest to their hearts. Since Gilbert is an excellent organizer, she piloted and continues to run the Hudson Valley Bulk Order program – a farmer-to-farmer cost savings program. In an effort to obtain product discounts and reduced shipping costs, the purchasing power of the farmers is combined. Gilbert aims to provide a 10-15% overall cost savings to participating farms, while retaining as minimal a percentage as possible to cover operating costs.