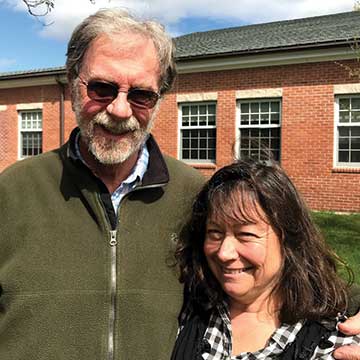 In a 2012 report by the Social Security Administration, officials estimated that 10,000 Americans would retire each day over the next nineteen years. In other words, retirement isn’t exactly news-worthy these days.

That is, of course, unless a retirement isn’t your typical retirement. Such is the case this year when Housatonic Valley Regional High School says goodbye to two pillars of its Agricultural Education program: Mark Burdick and Karen Davenport. The two veteran educators plan to retire in June with a combined seventy years of experience in education. Recently, I sat down with Mark and Karen to reflect upon their careers and future plans.

The sage owl & the hugger

Mark glances over the frames of his glasses, and for a second I glimpse a stern, disapproving New England elder who would fit right into a production of The Crucible. In another second, however, a warm smile beams through his grizzled beard, the corners of his mouth curled just enough to suggest a trace of a trickster. Among the Future Farmers of America (FFA) he is known as the sage owl, but I see him as more of a coyote, equally quick with a clever solution and a corny pun.

Karen leads with her smile. Radiating through her cheeks and eyes, it suffuses her body, suggesting that a hug could happen pretty much at any moment. I’ve never been much of a hugger, but I know that even today – perhaps more today than ever – there is still a place for them in school. Good teaching begins and ends with relationships, and Karen’s genuine interest in her students lays the foundation for effective learning. But more than that, she just makes everyone feel welcome.

Burdick is the elder statesman, having served forty-one years between HVRHS and Nonnewaug High School in Bethlehem, CT, which he attended as a student. His path to retirement took an interesting turn nine years into his career, however, when the paltry teaching salaries of the era and the lure of owning his own farm enticed Burdick to try his hand at cheese making.

For all of our criticism of lawmakers, we can sometimes point to legislation that truly makes a difference in our world, and when Connecticut legislators penned the Educational Enhancement Act of 1986, it encouraged educators like Mark to take a second look at teaching as a career. Enticed by the incentive, Burdick also realized what he was missing in the interactions with students, and when the venerable Walt Burcroff retired from teaching the Agricultural Mechanics courses in 1987, Mark returned to the classroom, where he has been ever since.

Educators amass a lot of stuff over their careers: lesson plans, tests, memories, and in a shop setting, lots and lots of small nuts and bolts. Most of that content is continually in a state of revision, but of all the detritus from forty years of teaching, it’s Mark’s puns that are most in need of preservation. Days when we suspend our bell system are “No Bell Peace Prize” days. When Burdick teaches students how to identify a shagbark hickory, he reminds them that “you can tell by its bark, not its bite.”

If you are done groaning, you’ll also probably admit that you might remember those quips well after you are done reading, and that’s exactly the point. When I asked a group of students, all of them offered up a Burdick-ism, and some of those students hadn’t had a class with him for years.

How technology has changed teaching
“Students haven’t changed much, really,” Burdick opined when we reflected on his career. “But the technology.…” Burdick distinctly recalls some game-changing moments when new technology caused him to rethink his role in the classroom. He described a moment in the shop when a student asked him about using white grease on a small engine part. Before he could even investigate, the student held up his phone and said, “Hey, Mr. Burdick: this guy’s using white grease on YouTube.” Now, students access how-to videos and owner’s manuals online for all kinds of projects.

The mother of the FFA

There are no owner’s manuals for living animals, though, and Burdick’s counterpart across the hall has not only (literally) shepherded hundreds of goats and sheep in the barn behind the school, but has shepherded thousands of students through their four years at Housatonic.

Most days, I pass Karen in the hall. In a world of hollow salutations, her’s manage to be personal. It’s that extra second beyond, “How’s it going?” when her attention lingers for a second to let you know that she’s actually interested in how it’s going. She’s not just asking to be polite – she really wants to see how you are.

If Mark is the father of the FFA at Housatonic, Karen is the mother. After a brief stint at Wamogo, she arrived at Housatonic in the spring of 1994 to fill in for a maternity leave that never ended. Like Mark, she marvels at the impact of technology on her classroom, both through the integration of devices such as ultrasound machines for animals and through the way it has impacted students’ behaviors and attitudes.

Since 1987, Davenport has shared real-world expertise with her students from her moonlighting as a farmer’s wife. Jim Davenport, her husband, is a member of Hudson Valley Fresh, a cooperative that provides the highest quality milk in upstate New York. Karen has brought that experience to her students at Housatonic, and she has also brought her students to that experience through field trips to the farm. Students test milk quality and learn how to maintain immaculate conditions for cows by learning on-site at her farm, Tollgate Farm in Ancramdale, NY.

Both Mark and Karen have surprisingly nautical pastimes, however, and both prefer the coast for their time away from school and farm. Burdick is an avid sailor who spends his vacations sailing a 16’ sloop, “Hard to Lee” (pun intended) on the Cape Cod Bay, while Karen prefers the quieter waters of Long Island Sound off of Noank. She often offers up her summer getaway to colleagues, but relishes the chance to escape herself, when her life allows (Ag-Ed teachers, unlike most educators, work throughout the summer due to the increased demands of maintaining their animals and facilities).

Karen’s two daughters, Kristen and Laura, followed in her footsteps, with Kristen working on her PhD in Microbiology at the University of Utah and Laura working with agricultural-related clients at a communications firm in Washington, DC.
As for Mark, his progeny followed in his footsteps and those of his wife, Bonnie, a teacher at the Cornwall Consolidated School. Sarah is now an Assistant Principal at Hall High School in West Hartford, and Tyler is the alternative high school teacher alongside Mark at Housatonic.

Fortunately, a strong crop of enthusiastic agricultural educators applied to fill the vacancies that will be left by Burdick and Davenport. All four current Ag-Ed teachers, three members of the Ag-Ed Advisory Board, and two administrators screened a number of candidates through reviews of their application materials, interviews, and sample lessons that allowed the educators and students an opportunity to see the candidates in action.

Audra Leach, currently a Science teacher in Coventry, will take the place of Burdick. Leach has deep roots in Agricultural Education, having previously taught Natural Resources and Agricultural Engineering/Mechanics courses at Glastonbury High School. She has never been far from AgEd, however, and has coordinated the state’s Career Development Event (CDE) in Natural Resources for the past ten years. Her experience in science classrooms provides important background in the revolutionary Next Generation Science Standards that she hopes to apply to her lessons in AgEd.

Danielle Melino, the sole AgEd teacher at Mount Everett High School in Sheffield, MA, will travel south to join the Housatonic staff to teach animal science classes. A lifelong horse owner, Melino brought the AgEd program to Mount Everett from her first teaching post in Durham, North Carolina, where she earned her Bachelor’s and Master’s Degrees at North Carolina State University. She has worked there since 2012, alternating between AgEd and Science courses, and is looking forward to a full slate of animal science classes at Housatonic.

It is never easy to say goodbye to mainstays of a program like Mark Burdick and Karen Davenport, but the chance to select their successors allowed them the opportunity to know the next generation of Agricultural Educators at Housatonic. Fortunately, both Mark and Karen anticipate easing into retirement like a hot bath. They know that their expertise and knowledge will still be needed long after they officially step down, and they have agreed to work with their successors to ensure optimal programming for students in the years to come. Although they are officially ending their teaching career, no one at Housatonic expects them to disappear anytime soon.