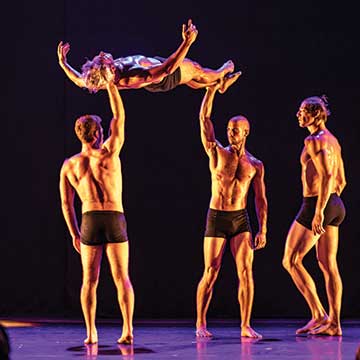 It all seems so obvious. Why wouldn’t people flock to a performance by a group named for a barnyard phototropic fungus that propels its spores toward sunlight with great speed, accuracy, and strength?

When Pilobolus welcomes audiences to its Five Senses Festival starting July 21, that’s exactly what will transpire. Named for laboratory experiments being performed by one of the troupe’s founders father at Dartmouth in 1971, the innovative modern dance company has performed in over 65 countries worldwide, been featured on the 79th Annual Academy Awards broadcast, appeared in countless commercials including a remarkable Hyundai spot, and successfully mounted annual tours that never cease to amaze their audiences. The Five Senses Festival, which begins with a gala fundraiser on July 21 in Washington, CT, will not only offer brilliant performances by the group, but engage a wide variety of artists, musicians, culinary stars, social theorists, historians, and designers.

Pilobolus performances are an intense blend of strength, flexibility, and the stamina required of elite athletes brought together with elegant movement supported by carefully selected music. Stories are told. Emotions are evoked. Messages are sent that celebrate humanity and envelope the audience.

It is not an infrequent occurrence that after witnessing a Pilobolus performance, members of the audience seek out the opportunity to be instructed and encouraged in the controlled freedom of their very unique dance style. A summer camp in Washington, CT, has been expanded to programs in New Haven, CT, Torrington, CT, and New York City. Children seem to take, naturally, to the wonders of Pilobolus movement … adults do so with misgivings that melt easily into joyful laughter and a sense of accomplishment.

Matt Kent and Renee Jaworski, co-artistic directors of the dance company have filled their summer, thus far, with far reaching travels and sold out performances. Renee rehearsed one troupe that set off for a return engagement in Saudi Arabia during early June. Considerations and restrictions that embody performances sponsored by the Saudi Ministry of Entertainment add layers of complexity to the already intricate work of creating and staging a Pilobolus performance.

“We have to re-work the pieces that we perform to make sure there is no male/female touching,” asserts Renee Jaworski, who led the group on its second visit to the Kingdom of Saudi Arabia. “Even the smallest detail, like putting on an abaya before leaving the plane are very important. Our rehearsals on site are viewed by the Ministry, who then make comments and suggest changes to make the performances acceptable.”

The cultural bridge, however, is a strong one. Ten performances in five days are filled with eager audiences who revel in experiences that are so unique.

Back at the Joyce

At the same time that Renee and dancers were off to the Middle East, Matt Kent was rehearsing two distinct programs that appeared at New York’s Joyce Theatre through the entire month of June. The core group of dancers spent weeks refreshing dances that had been created as many as 20 years ago, but are once again new and exciting.

As new members are added to the core team, there are intricate choreography, pin-point timing, and exacting moves that need to be learned … perfected. To view a rehearsal is to watch exquisite athletes fully engaged in a series of precision feats of strength that would make an NFL offensive coordinator feel right at home. One critical difference is that a typical play in football lasts only a few seconds of intense physicality while a Pilobolus dance flows through many exacting minutes.

Once tours and weeks long performance schedules are accomplished there is barely enough time to do the laundry, spend a few moments with family and friends, get a few moments rest, and gear up for the next major event – the trumpeted Five Sense Festival.

Part of the community

No matter how far ranging their travels, Pilobolus always returns to its home base in Washington, CT, where they have been based for years. Their small office houses the administrative team that books performances, reserves flights, books hotels, orders supplies, keeps tabs on the crates of technical equipment, and performs the “human resources” functions that keep tabs on the core team and the important list of freelance dancers who can be called on to fill out a tour or a performance.

When rehearsal time arrives, there is the constant need to find spaces large enough to replicate the size of a stage performance space, make sure the floor is covered with the black “molly” that provides the even surface so critical to acrobatic dance, and coordinate housing and transportation as programs are shaped, refined, and always improved.

Being a fully active participant in the community is critical to Pilobolus and is exemplified by the efforts of Emily Kent, the educational and community engagement manager for the group. Working closely with ASAP! – the After School Arts Program that for the past 20 years has engaged over 9,000 students each year in a variety of arts programs and experiences, Emily leads an eleven-week after school program that culminates with a performance by Pilobolus and a performance by the students who have become fully engaged with the challenges of modern dance.

With summer at hand and the announced dates for the Five Senses Festival, community buzz centers on how, possibly, Pilobolus can
better the total experience that was the 2018 Festival.

“We’re truly excited about where the Festival is going,” offers Matt Kent during a rehearsal break. “We’re working with brilliant musicians Bela Fleck and Abigail Washburn and have begun working with an exciting musician and composer who has already scored one of our Joyce pieces, Stuart Bogie.”

Simply (and comprehensively) billed as the celebration of “breathtaking art, music, dance, nature, food, ideas, family activities, and conversation,” there is little that is not included in the Five Senses Festival. Beginning with the fundraising gala – the Five Senses Ball on July 21 – it stretches across two full weekends, July 26, 27, and 28 and August 2, 3, and 4. Programs are all offered at Five Senses Festival Field, 292 Bee Brook Road, Washington, CT. Hours are 9:00am to 10:30pm each day.

Art installations by Randy Polumbo and Lauren Booth will be experienced as well as writing workshops with Claire Messud, Nicole Krauss, and Dani Shapiro.

Food is an important contributor to celebrations of the senses, and this year Cassandra Purdy will host guests who will demonstrate their own form of culinary artistry.

There will be what is now a fixture of the Festival, a tent set up for kids’ activities throughout the Festival run presented through collaboration with Jessica Russel of Artroom Atelier. Childcare will be available for families and wellness programs will be interspersed through the two weekend schedule with yoga led by Lela Ilynsky, meditation led by Jampa Stewart – both of the Valley Spirit Wellness

Intriguing thought may not be one of the recognized five senses, but presentations and discussions led by such luminaries as designer Bruce Mau, will highlight the fully interactive Festival.

There will be performances by Pilobolus, to be sure. Fresh from tour and residency, the eagerness of the immensely talented to share what is fresh and new will be on full display. The refreshing undercurrent of the Five Senses Festival is that the events are either very low cost or entirely free. Support for the event comes from both the Five Senses Ball and the generous support of local community foundations.

It’s summer. Time to celebrate with all five senses!