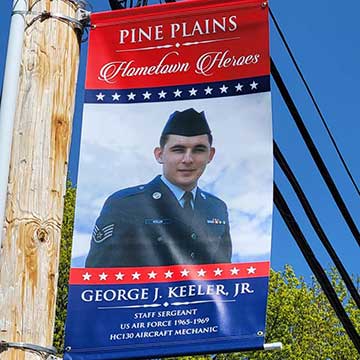 It is the season of giving. When we think collectively about this time of year, it can be hard not to conjure up visions of the holidays that have been baked into our modern DNA through tradition and commercialization. That is not to say those two elements are necessarily nefarious, visions of Rockwell family dinners, and the familiar hum of classic holiday songs are senses we have all come to know and love. At the heart of our annual sentimental adoration of the holiday season is our innate passionate sense of gift-giving. Though the modern form of this notion has been somewhat warped overtime to include the image of a bevy of expensive items under the tree and strewn about the living room floor on Christmas morning, the charitable heart of the season remains. Still, there are some gifts that simply don’t come wrapped, or are bought for the sole purpose of recording a reaction for social media, sometimes it is simple recognition that rekindles the spirit of the holiday season.

Before we gather around the table for Thanksgiving in November, we celebrate Veterans Day honoring the brave veterans and their loved ones who have given so much to protect our way of life and ensure our freedom. Many of these men and women, serving at home and abroad, or who previously served valiantly in foreign conflicts, live right next door – and oftentimes, many of us aren’t aware. The US Census Bureau indicates that around 18 million veterans currently reside in the US, and over 75 percent of the veterans are above the age of 65.

These brave folks are ones who we pass by in the grocery store, stop to hold a brief chat with while filling our tanks at the gas station, or even hold council on our front lawns over the ups and downs of the NFL season. Hardly do we see them as heroes and never do they demand attention for their sacrifices. Yet, veterans have to live with chronic pain, disability, and other service-related illnesses. Apart from the physical toll, studies show that military veterans – even those not in active combat duty – are at a higher risk of mental health disorders, such as post-traumatic stress disorders (PTSD).

It is in this soup of holiday happenings, at times mixed with the genuine feelings of sentiment, love and empathy, and at others lured into a false sense of stature or entitlement brought on by plastic consumerism, that the veteran gets lost. Veterans serve their duty with an unnerving sense of selflessness.

For our part, as unspoken beneficiaries of that selflessness, our duty to them is an order of magnitude less than what they have dedicated for us – but can still be just as impactful.

An offer of recognition

In the Town of Pine Plains, NY, as in towns across Dutchess County, this simple offer of recognition is being realized in the form of banners – thanks to the Hometown Heroes project – that have begun to adorn neighborhoods and Main Streets.

The mission of the Hometown Heroes project is to place banners honoring veterans, either living or dead, who have served in any branch of the United States Armed Forces. The Hometown Heroes project allows local families to honor their loved ones by sponsoring a banner to be displayed on the utility poles throughout local communities. We spoke with a few of the leaders in Pine Plains who helped bring this vision to life for residents, veterans and their families.

Mr. Pulver is a Dutchess County Legislator for District 19 who was Pine Plains Town Supervisor for 12 years and member of Pine Plains school board for six years.

How did the Hometown Heroes banner initiative begin in Pine Plains? What were some of the key factors that made it possible?

Firstly, I’d like to say that this whole project, for me, has reinforced the idea that if you do the right things, then good things happen. I noticed the Hometown Heroes project taking precedence in other towns and I have a great relationship with Pine Plains Town Supervisor Darrah Cloud. I find these types of local projects are usually easier to accomplish if we go through town leadership. I approached the Supervisor with the suggestion and formed a committee, to research local veterans, their families, and follow through with banner creation and placement.

Bob Clinch, a local and a veteran in his own right, jumped in with both feet. Ginocchio Electric has been instrumental as well by allowing us to utilize their bucket trucks as well as the folks with the Pine Plains School District. My wife and I mapped everything out. The community outreach has been incredible. So far we have hung 80 banners for our local veterans with plans to close in on 100 by spring.

As someone who calls Pine Plains home, how significant was this project to you personally?

Very. The very first banner we hung was in honor of Shannon Kent who I knew personally, so it was a very emotional day for me watching her banner go up. Then came Henry “Moose” Karn who, long ago, made a pledge during World War ll that he would march in every Memorial Day parade here in Pine Plains. I knew him personally and he came to town every year he was able to march or at least be present. These are people who I knew and grew up with so it was particularly special to me.

How can other small towns participate?

Well we are currently working with Millerton and the Town of North East to implement this project and I’ve already assisted Amenia and Pleasant Valley with their banners. I think it’s a simple question of willingness and commitment to these local folks who have served.

How important is it for you to keep former and active local veterans at the forefront of residents’ minds?

Hugely important. The most critical aspect of these banners is that folks get to see these faces everyday. We were able to place the first dozen or so where our veterans lived or grew up and that made it easier for folks to make connections. Several of these veterans were present for the unveiling of their banner and many were caught by surprise, it was incredible and humbling to see their reactions. Many of us often don’t realize what kind of heroes these people were until we see their image from years past. Seeing them as younger people, it was amazing to turn back time.

Ms. Hanback-Nuccio is the secretary to the Town Supervisor Town of Pine Plains and was instrumental in the planning of the Hometown Heroes project in Pine Plains.

How did you help to organize the Hometown Heroes banners in Pine Plains?

I am the secretary to our supervisor Darrah Cloud and together we did some research to come up with a physical design for the banners. The local VFW and the American Legion got involved and we came up with the criteria for getting veterans on the banners we designed. One of our first sponsors was even someone from out of town. It’s been a wonderful project and I’ve gotten to learn about some really well-loved people.

How has the response been around town?

It has sort of enveloped the town with a feeling of security and support. I think the presence of these banners fills people with tremendous pride for their loved ones. We try to hang the banners close to where they live or once lived to make the connection that much more personal.

The criteria for the banners is that one would have to have lived in Pine Plains when they were enlisted of course. Through conversations, we figure out the rank, specialty, dates, and locations served. It’s been fun because some of the abbreviations are hard to understand but the vets know and you can tell there’s a strong brotherhood there.

How important is it for residents to see and honor those who serve or have served?

Incredibly impactful. I have my favorites and I say good morning to the banners I see regularly. Supervisor Cloud has since suggested a walking tour of the banners featuring an app that would provide stories for residents and visitors, which I think would be incredibly exciting. Some of these veterans I had known as simply my parents’ friends and to hear their stories has changed my perspective forever.

A member of the American Legion, Mr. Clinch comes from a family of veterans and served his country in the Vietnam War.

How did you become involved with the Hometown Heroes project in Pine Plains?

The leaders here needed someone to be a liaison for the vets to the town and I was happy to oblige. I volunteered my services as post commander and a veteran of the Army.

The banners are extraordinarily personal for me as a lifelong resident of Pine Plains, a nephew and an uncle of a veteran as well as my father so there’s quite a history between the four of us who combined for ten combat tours. I wanted to be involved so it got done the right way. One of the criteria was a copy of a dd-214, or a veteran’s discharge papers, so I combed through all of those papers for this project. Gregg and I reached out to Ginocchio Electric and the Pine Plains School District to help us get set up.

Was this a personal effort for you?

If there ever was such a thing, this was a labor of love. I spent ten years as highway superintendent so I have knowledge of all the streets as well as the older vets in town. That allowed me to help put a personal touch on the banners. There are four main streets in the center of town, and I knew all the people who lived in those houses. There are important memories in those places that deserve to be recognized.

How important is it for you to honor veterans in your hometown?

I’m very proud to be a part of this. Hometown Heroes has caught fire like nobody could have anticipated. In only a year and a half, and in a small town of 2700 people, we have 86 banners. We hope to have them up year round, it is important to see these heroes throughout the year. They are a permanent fixture in the fabric of Pine Plains. 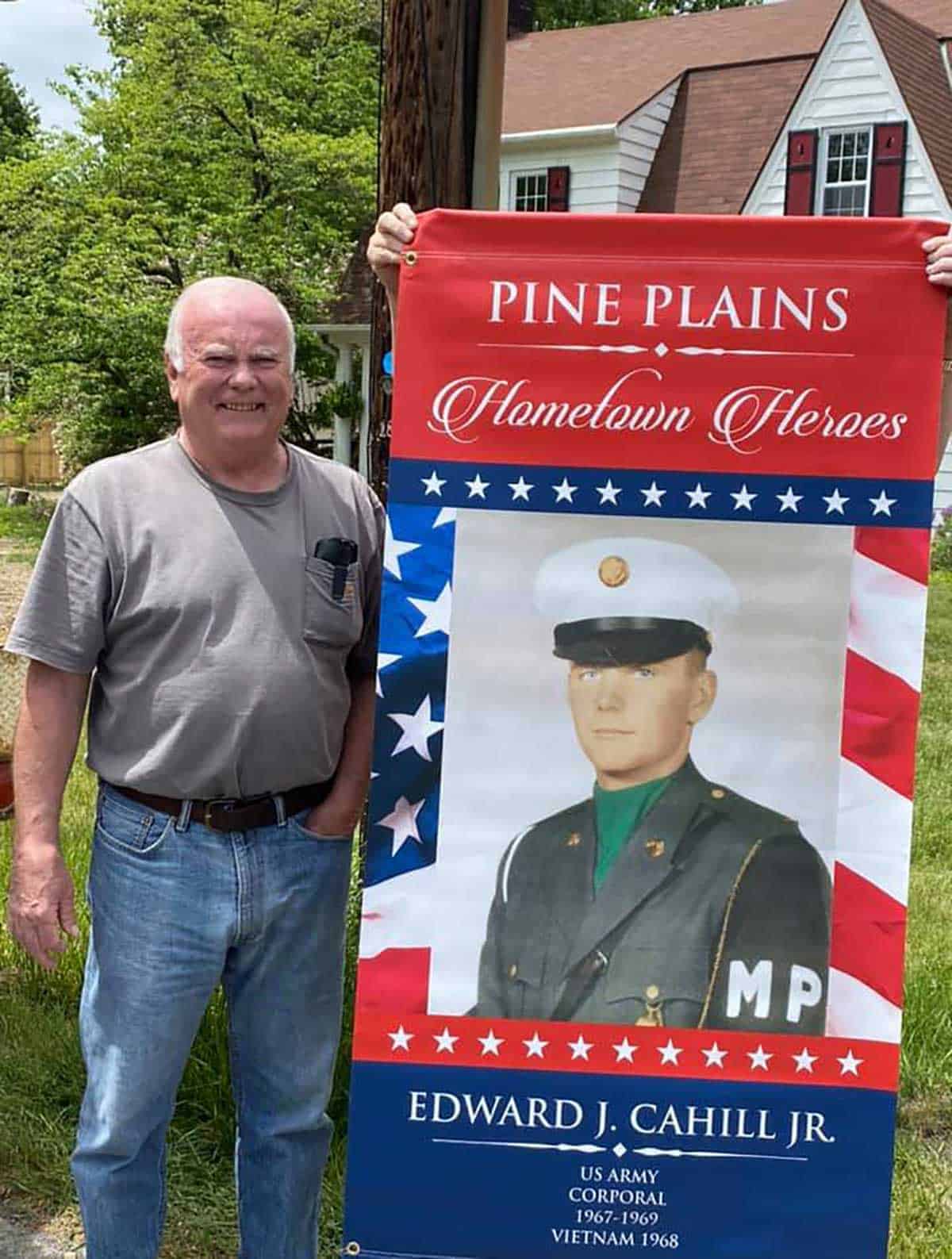