A pentimento, in painting, is “the presence or emergence of earlier images, forms, or strokes that have been changed and painted over.” Even the greats, like Rembrandt, Da Vinci, Caravaggio, and Titian, revised their paintings to eliminate figures, reposition compositional elements, or change backgrounds. The original elements, the pentimenti, survive in the paintings like ghosts, hidden and detectible only by modern X-rays and infrared reflectography.

Pentimenti can also be detected in buildings, notably in older structures that have been expanded when space needs demanded or building fashions changed. A good local example is the 1797 Hillsdale House, where a 19th century expansion of the original brick building is quite visible on its eastern gable end.

But newer buildings can also have pentimento histories. Take the building at 9245 State Route 22. Even if you’ve lived in Hillsdale for 25 years, you’ve probably never thought of it as anything other than the US Post Office.

That’s what we thought, too, until the building’s air conditioners gave up the ghost this past summer. We were surprised to learn that the structure’s electrical wiring was so old it wouldn’t work with a modern AC unit and had to be replaced. (So that’s what took so long!)

Just how old was this building, we wondered? And what was it before became the Post Office? We decided to investigate.

The story starts in 1953, when plumbing contractors George Krauss and Remo Gabaccia purchased the land and a building where the Post Office now sits from George Petith. The building they bought was the structure that runs north/south as an “el” from today’s Post Office.

Krauss and Gabaccia ran their plumbing and electrical contracting business from that building. They also built a Quonset hut behind the original building to serve as a garage. It’s still there — you can see it from Maple St. — with the Krauss & Gabaccia logo visible on the sides of the hut. (Fun fact: “Quonset” is an Algonquin word meaning “small, long place,” and the Quonset hut took its name from Quonset Point, RI, where the first one was manufactured.)

In 1965, Krauss & Gabaccia added an addition to the original building and this structure now houses the Post Office. It was designed by architect Joan DeRis Allen, an Anthroposophist who followed a philosophy founded in the early 20th century by the Austrian philosopher, social reformer, architect, esoteric spiritualist and (some said) clairvoyant Rudolf Steiner. 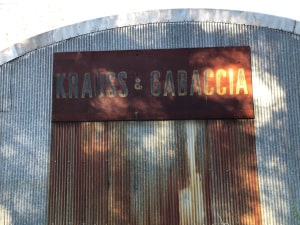 Rudolph Steiner developed the philosophy of Anthroposophy, which sought to build a Western approach to spirituality based on the philosophical and mystical traditions of European culture. He inspired the Camphill Movement (and thus the Camphill Villages) and Waldorf Schools, such as the one at Hawthorne Valley. Joan and her husband Paul were committed to the Camphill Movement, both in the UK and the US. There is some reason to think that she designed some of the buildings at Camphill Village in Copake. What we do know is that she designed a home for herself and Paul on Jug End Road in South Egremont. The house, which has remarkably similar features to the Post Office, was featured in a Berkshire Eagle article from 1961. Krauss and Gabaccia probably got to know Joan Allen while they were plumbing buildings at Camphill Village.

Ironically, Remo Gabaccia, who plumbed what is today the Post Office building, did not appreciate Joan’s approach to architecture, grumbling that she “must not believe in right angles,” so difficult was his task, according to his daughter, Donna.

Krauss and Gabaccia closed shop in 1973, as did Hilco Valley, but the partners retained ownership of the building until 1986 and leased it to

a variety of businesses. The first, in 1973, was a crafts gallery called The Hand of Man, owned and operated by Marvin Gleich. Interestingly, Mr. Gleich was a big supporter of the crafts program at Campbell Village (there’s that name again) and set aside a large corner of his gallery to display works by Campbell artisans.

After Mr. Gleich died in 1975, the family closed the gallery, freeing up the space for Town and Country Home and Gift Center, owned by Arnold Smith and specializing in appliances, televisions and various home décor items and knickknacks.

Area residents in the market for a new refrigerator could breathe easier because Mr. Smith arrived just as the other appliance store in town, Ernie Knox, Inc. (located in the space now occupied by Hillsdale Fine Wines) was closing its doors. If one was shopping for a console television, an alternative to Town and Country was the Hillsdale Sport Shop in the brand new Morandi Shopping Center, next to Morandi’s Restaurant and Pub. Today, the restaurant is called Four Brothers. The shopping center, sadly, went up in smoke in February 2020, although the restaurant was spared.

Town and Country closed in 1979 and later that same year the space was transformed into the Hillsdale Pharmacy, owned by Leon and Nancy Silvernale. Hillsdale native Robert Edelman, then a recent graduate of Albany College of Pharmacy, was the manager. In addition to serving the town’s pharmaceutical needs, the store for a while served as the Hillsdale distribution point for the Columbia County Office of the Aging Meals-on-Wheels program.

The Hillsdale Pharmacy closed its doors for good in May 1984. We can’t say for sure the cause of its demise, but at that time independent pharmacies were facing the double whammy of the rapid expansion of drug store chains and severe profit pressure brought on by the emergence of pharmacy benefit managers like National Pharmacies (now Merck-Medco).

In 1986, Krauss and Gabaccia sold the property to the above-mentioned Ernie Knox, who leased the space to Alan Gurewitz. Mr. Gurewitz opened Audio Plus Electronics, an authorized Radio Shack dealer. The store was in business until the early 1990s, when Mr. Gurewitz moved the whole operation to West Palm Beach, FL, where it remains in business today.

In 1987, Mr. Knox sold the property to the Longobardo family, which owns it to this day. Dr. Vincent Longobardo was a well-known anesthesiologist at Fairview Hospital. His sons Brendan and Carlo are both graduates of the highly respected Palmer College of Chiropractic and are in practice together today in Worcester, MA. But for a short time, Brendan ran a chiropractic office in the old Krauss and Gabaccia workshop – the sign is still there.

In 1995, the Hillsdale Post Office had outgrown its space in the building at 7 Anthony Street (which, in an ironic twist of history, had been owned for seven years by Ernie Knox), and requested bids for a larger space in Hillsdale.

On July 1, 1995, the USPS signed a ten-year lease on the Longobardo building, with four five-year extensions. The post office opened in August of that year and it is, of course, the post office we use today.

Towns change, buildings are built, and businesses open and close in them. But you don’t have to look far to find bits of the past, like pentimenti, still present in the space between old and new. 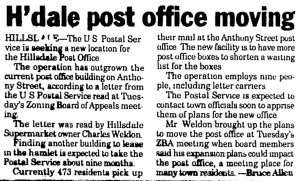 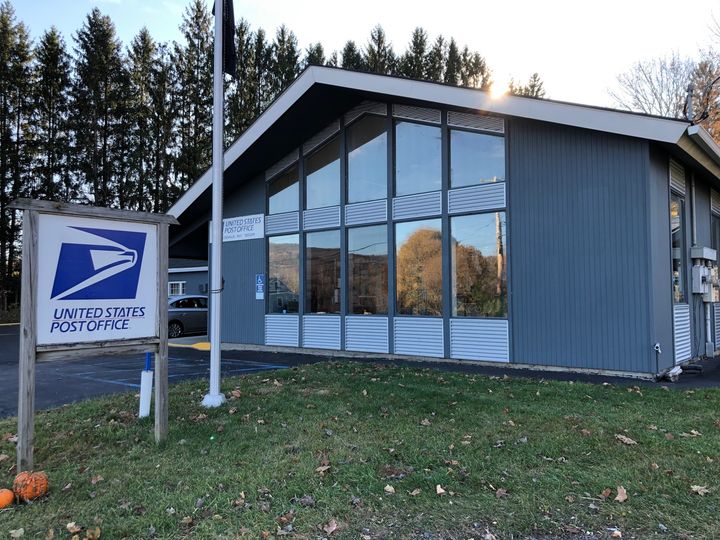