It’s the place where Jerry Lewis, Mel Brooks, and Rodney Dangerfield kicked off their comedy careers, the setting of the 1987 film Dirty Dancing, and a summertime destination for the stylish Maisel clan of The Marvelous Mrs. Maisel fame.

The name “Catskills” was derived from the Dutch “Kaaterskill,” which translates to “Wildcat Creek.” Although the Catskills spans the Delaware, Greene, and Ulster Counties, many people still associate “the Catskills” name with Sullivan County.

Although Sullivan County was established in 1809, prior to its formation, its land belonged to Ulster County. Although the county lies at the foothills of the Catskills, the Jewish tourists who vacationed there in the mid-1900s commonly referred to the resort area as “the Catskills” and the moniker stuck. 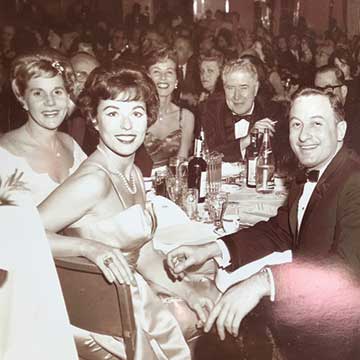 An ideal locale for autumn escapes, Sullivan County offers everything from colorful foliage to waterfall hikes, kayaking, and fly-fishing. The region also boasts many farm-to-table restaurants and a vibrant arts scene. Throughout

the years, there’s been an ebb and flow of tourists. Let’s travel back in time to learn about its history and evolution.

The rise of tourism

In 1832, when noted essayist and novelist, Charles Fenno Hoffman penned an article about a fisherman who hooked a six-pound trout in White Lake, the area began luring other anglers who were hoping for a big catch. In 1846, the first summer hotel in Sullivan County was established in White Lake. Two years later, The White Lake Mansion House made its debut. Although the historic building was abandoned in the 1970s, the building still stands today.

The railroads, which were built in the wake of the Civil War, paved the way for tourism. “The railroad tracks were like the stitches that put the country back together after the Civil War,” says Sullivan County historian John Conway who reconstructed the evolution of the resort industry in the region.

“There were two prosperous eras of tourism and they were very different from one another,” adds Conway. He coined the terms “Silver Age” and “Golden Age,” which are commonly used in reference to the peak areas of tourism in Sullivan County. Conway has authored seven books about the area’s history. His most recent book, In Further Retrospect, which was released in February 2020, contains a chapter on “Resorts and Recreation.”

Conway defined the period between 1890 and 1915 as the Silver Age of tourism in Sullivan County. Due to a rise in anti-Semitism in the late 1800s and early 1900s, the county became a destination for Jewish people fleeing Eastern Europe. Many were farmers who were eager to purchase inexpensive land. In the late 1800s/early 1900s, many Jewish families were also relocating from crowded New York City tenements to the sprawling grassy lands of Sullivan County. This was partially due to the spread of tuberculosis, a disease that affects the lungs.

Due to poor soil in the region, many farmers who planted roots in Sullivan County struggled to earn a living from agriculture. To supplement their income, many families began taking in boarders. In the 1890s, tourism became a key industry. At the time, 200 hotels dotted the region, which was brimming with scenic mountains, lakes, and lots of sporting activities.

Many people believed that Sullivan County was a healing environment for those who were ill. Around 1900, an advertisement that appeared in various publications highlighted the message, “Doctors Say Go to the Mountains of Sullivan, Ulster, and Delaware Counties for pure air, water, and milk.” (See ad on next page).

Since people of Jewish descent weren’t welcome at many establishments, Jewish families started opening hotels that catered to a Jewish clientele and kept kosher kitchens. In 1899, the first Jewish hotel, The Rock Hill Jewish Boarding House, was established. In 1907, Kutsher’s Brothers Farm House opened its doors. In 1908, two Jewish entrepreneurs purchased the Christian hotel, Flagler in South Fallsburg and converted it into a Kosher establishment.

Tourism continued to rise when travel on the New York, Ontario and Western Railway (O&W Railroad) was soaring. In 1914, the Grossingers, a Jewish family from Manhattan’s Lower East Side, scraped together $450 to purchase a farm in Ferndale. Since farming didn’t generate enough income for the family, they took in boarders. The family’s matriarch, Malka, had experience as a host and cook, so she began operating a kosher kitchen. When they took on nine boarders, the family generated $81, which was a windfall at the time. By 1919, the Grossinger family moved to larger quarters. Their establishment, Grossinger’s Terrace Hill House, became the most popular hotel in Sullivan County and one of the most renowned worldwide.

The decline of the Silver Age era began around 1910, not long after the medical community discovered that tuberculosis was contagious. Once that news became mainstream, train usage halted, which impacted the tourism industry.

The Golden Age of tourism spanned several decades, from about 1940 to 1965. With the decline of railroad travel, there was an upswing in automobile transport, which kicked off in 1908 and became more mainstream in the years ahead. Lots of larger resorts were being built at the time. Rather than sending guests into the surrounding towns for entertainment, comedians and musicians performed on site. Jerry Lewis, Jackie Mason, and Joan Rivers are just a few of the luminaries who entertained crowds during the Golden Age.

Due to the vast numbers of Jewish people vacationing in Sullivan County, the resort area eventually became known as the “Borscht Belt.” The name hails from Borscht soup, which arrived in America with the Ashkenazi Jews and Slavic immigrants. The Borscht Belt era of tourism peaked in the 1950s and 1960s. In 1953, The New York Times reported that there were 538 hotels and 50,000 bungalows in the Sullivan County region. There were also about 1,000 boarding houses.

The Concord Resort Hotel was another key destination of the day. At its peak in the mid-1950s, the Concord, with 1,200 rooms, may have been the largest resort hotel in the world. Its Empire Room had the capacity to seat 3,000 guests who would enjoy acts performed by Milton Berle and Joan Rivers. For one performance, Joan Rivers was paid a steep $50,000.

“On the weekends, we would travel from Manhattan and perform at a few resorts and then return to Manhattan, so we could go to school the next day,” says Eddie Maligmat, a child musician of the era. Maligmat was part of The Rocky Fellers, a family band who signed with Scepter Records.

By the mid-1960s, many of the hotel resorts had begun closing. A trio of factors led to the demise. They include air conditioning, relatively inexpensive airfares, and assimilation of the younger generations of Jews in America. The Civil Rights Act of 1964 outlawed discrimination. In the 1970s, 40 to 50 hotels remained in operation, but by the 1980s, only five or six remained.

“There was an indication of things changing around 1965,” says Conway. In 1987, Dirty Dancing was released. In the film, which was set in 1963, resort owner Max Kellerman said, “It all seems to be ending. You think kids want to come up here with their parents to take foxtrot lessons? Trips to Europe, that’s what the kids want.’”

“Going to the Concord and other resorts were among the best memories of my childhood,” says former New Yorker Suzy Vallardi who used to vacation there with her family during the 1970s.

In November, 2013, casino gaming in New York State was legalized. The Resorts World Casino opened in 2018 on the former site of the Concord. This mod destination now boasts a namesake resort hotel, lifestyle boutique hotel, casino, entertainment complex, and spa. Family fun can be had at the Kartrite Resort & Indoor Waterpark, which boasts 324 suites and a luxury lodge experience. Following the shutdown due to Covid-19, the casino reopened on September 9 at reduced capacity.

Many other attractions in the Catskill area continue to draw tourists and dwellers to the region. In the wake of the onset of the Covid-19 pandemic, many families fled the city and relocated upstate.  It will certainly be interesting to watch what the next decade brings in Sullivan County, the Catskill region and the greater Hudson River valley. •