Remember This?: The Rise of the Bloom

During the summer of 2017 residents of the Hudson Valley had more on their minds then simply carefree days lounging lakeside enjoying their favorite beverages. In fact, there was an imminent threat to all traditional summertime activities in the form of harmful, toxic bacteria lingering atop lakes and ponds all across upstate New York. From threatening the local fishing industry to contaminating local reservoirs, there existed a justified concern among residents about the very safety of the bodies of water that surrounded them. The algal bloom crisis of the summer of 2017 was one that dotted the front pages of local news media for months, but as the seasons changed and sunbathers, campers, and hikers began to retreat indoors the concern over the safety of our natural bodies of water began to dissipate. Since then not much has been recalled about the large algal blooms that invaded Columbia County. So what happened? What caused toxic algae to become so prevalent so quickly? And, is the problem finally solved? Or is algae still a fundamental concern for the safety of our natural water supply? 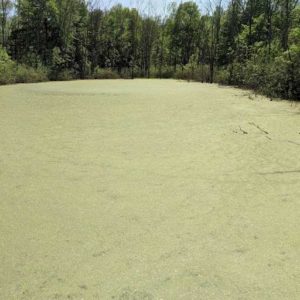 Harmful Algal Blooms have been on the rise in Upstate New York since 2015, mostly associated with rising temperatures caused by climate change leading to more ¨heavy rain events¨ which contribute to increased phosphorus and other nutrients contaminating the water in ways that lead to exposure to toxins that may lead to certain types of bacteria related illnesses. In September of 2017, the town of Coxsackie NY came dangerously close to experiencing the contamination of its drinking water when a particular algal bloom invaded the town’s reservoir. In response, the town took extra steps to flush their water through hydrants and installed new filtration equipment in order to combat the problem. Still, the State Department of Environmental Conservation reported that around 66 bodies of water contained toxic blue-green algae in August of 2017.

Though the presence of algae may seem harmful on the surface, local experts tend to disagree on the nature of the algae’s effect on the water itself. A member of the University of Connecticut Ecology and Evolutionary Biology department maintains the algae’s presence is somewhat cyclical. “It’s a natural phenomenon” he explains, “Though it may seem algae is absolutely harmful with no exceptions, too many nutrients can actually destroy life rather than sustain it.” Typically, bodies of water near areas of agriculture, like farms for example, can see a rapid increase in the spread of algae due to the use of synthetic fertilizers. “The blooms will eventually fade,” he continues, “Once colder temperatures set in the blooms are pushed away.” Despite the perhaps overstated potential harm of the blooms, many in the ecology field warn that the increase in climate change gives the water less of a chance to cool and destroy the blooms themselves. Despite all this, in 2018, Governor Andrew Cuomo unveiled a 65 million dollar initiative to combat harmful algal blooms in New York State. Though two years have passed since the algal bloom panic of the summer of 2017, New York residents would still be well advised to keep a close eye on the bodies of water they use for recreational purposes.