Remembering the doggies, too!

Memorial Day is a day to celebrate all of those who have made the ultimate sacrifice in service of our country and we collectively honor their memory.

After all – this is the land of the furree because of the brave.

Now, fur obvious reasons, I’m not a dog lover, but I think it’s important to recognize all the dogs who have served too.

I don’t know how they did it?!

Dogs have a very long history in combat of course. They were used in the American Civil War to protect, send messages, and guard prisoners. During World War ll, the United States Marine Corps used dogs, donated by their American owners, in the Pacific to help take islands back from Japanese occupying forces. Almost every breed of dog was eligible to train as “war dogs of the Pacific”. Of the 549 dogs that returned from the war, only 4 could not be returned to civilian life. Many of the dogs went home with their handlers from the war. About 5,000 US war dogs served in the Vietnam War as well. The K-9 units are estimated to have saved over 10,000 human lives.

All the training they had to go through left little time fur catnaps. They worked their tails off helping our humans come home safely to us felines, all while putting themselves in harm’s way, too. Sniffing fur explosives, hunting, and being watch dogs, just to name a few of their job descriptions is impurressive! I’d like to invite evfurryone to give these fearless four legged furriends of mine a round of appawse furr all that they did.

From the bottom of my heart – thank you to the humans and doggies that defended our country! I’m so purroud of you all!! 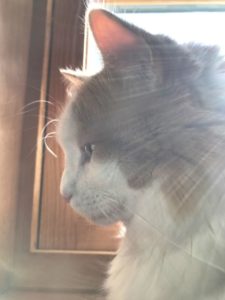