Renaissance Man with a Camera

We live in a strange time – a moment when some of our trusted norms and traditions seem to evaporate with the slide of a “mouse” or the flick across a phone screen. Word processing allowed everyone to become a writer – no more laboring with pens, pads, typewriters and carbon paper. Finish the screed and hit “send.”

And, as for photography, the notion of lugging around the family Pentax and a tripod or hiring the local wedding photographer to memorialize the family reunion has evaporated with three lens iPhones that easily link to the internet and the printer in the family room. 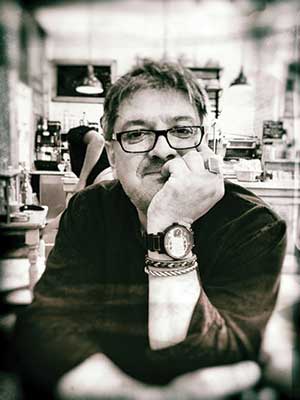 Back in the day (a wonderful phrase that embodies nostalgia seasoned with a touch of lament) photography was something very special. The photo journalists who braved wars and fires and hurricanes and late-night accidents brought the challenges of life to newspapers and magazines. Raising the flag over Iwo Jima. The Hindenburg in flames. A picture told a thousand words.

When Edward Steichen, F. Holland Day and Alfred Stieglitz elevated photography to new levels with their carefully designed, often staged photographs, the reliable communication medium moved boldly into the world of art. There was journalism … and there was art.

Debate ensued, with voices raised on both sides of the “is it craft or is it art?” argument. Florin Firimita, whose website is an engrossing art gallery of carefully staged images, has grown out of the tradition of photography as art and continues to be one of today’s widely hailed proponents.

On a stool in the darkroom

“I suppose I was five or six when I crawled up on a stool and learned from my father how to develop and print photographs,” recalls Firimita. Growing up in Bucharest, Romania, in the years following the Soviet takeover of the country, life was not easy. “All of our property had been confiscated. My mother worked as a seamstress in a factory and my father, an amateur photographer who captured weddings and funerals populated with professional mourners, had to be very creative when finding film and paper and chemicals. We were not Party members. Things were very different … very hard.”

Both of his parents died at young ages, leaving teenaged Florin alone and struggling as the Berlin Wall came down and Europe began to shudder with the social and political changes. “I became a refugee,” he recalls, recounting his journey with nothing more than a suitcase to a refugee camp in Rome, then off to New York and into Connecticut. “This was a ‘right to work’ state and I was able to get jobs that kept me alive and allowed me to learn English.”

A teacher at heart

From childhood, Firimita had wanted to be a teacher. “I went to college without having learned how to master English,” he remembers with a laugh. But, working in a stockroom for a grocer, he discovered a way to effectively learn the new language. Reading the ingredients and directions on packaged goods, he was able to piece together words and images and concepts.

Armed with a college degree in arts education, he ventured into the teaching ranks, first in elementary schools, then in a state-funded program that brought art education to high school students. “I loved it. We were able to put together study trips abroad for the students … giving them the chance to experience the work and life of artists from Trinidad and Tobago to Paris.” 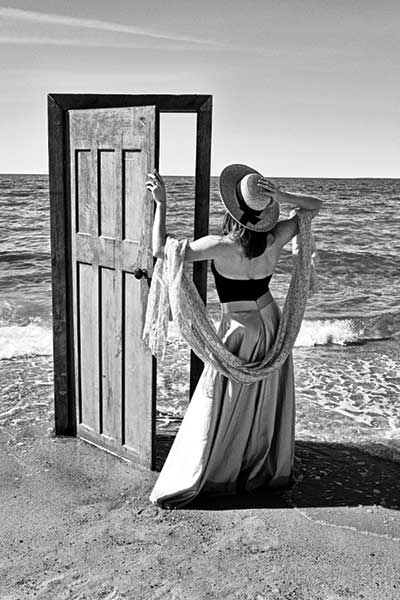 Now a teacher at Pomperaug High School in Southbury, the 90-mile a day commute from his northern Connecticut home gives Florin the chance to muse, reflect, imagine and unwind. The results are striking.

“Although I have been an artist and a writer across several media, the return to photography has brought back the satisfaction I felt as a child – not only taking the photograph, but watching it emerge from the chemical bath to be a work of art in itself.”

Pillars of the art photography movement in the United States include recognizable names like Ansel Adams whose natural landscape photography hangs in museums around the globe, and Robert Maplethorpe whose nudes are widely collected, and Sally Mann whose portrait photography is dramatic and arresting. Florin Firimita’s work engages all of those elements and brings them together in a series of images that may capture a moment, but only insofar as that moment is part of a rushing continuum.

“I don’t have the patience and the genius to walk the streets and wait for something to happen. Instead, I invent scenarios and bring them to life. I try to infuse my images with a sense of mystery.”

Individual works of art, volumes that collect an entire series of work as in the five-year project The Bookstore, which has gained wide recognition and explorations of mixed media that combine art photography with other visual elements … they are all part of the Florin Firimita portfolio. He is a writer, an artist, a teacher, a photographer, and force to be recognized and applauded.

When the Rodin Museum in Paris invited Firimita to do a multi-day photography session in their rooms and grounds, he was both humbled and eager to explore the homes of Rodin and Camille Claudel, his muse and mistress. The resulting works both challenge and charm.

Paris has become something of a second home for Firimita. The celebrated GADCOLLECTION represents his work and regularly sells out editions of his art photography prints. “When I started out, the idea of getting $100 for a print was amazing. All that has changed, and for that I’m very grateful.”

In some quarters, thanks to the emergence of camera phones and seemingly endless online contests, the debate lives on whether photography is art or craft. For Florin Firimita, there is no question. He is an elegant artist who happens to use a camera to capture his work.

Perhaps he can share the irony and edgy humor of no less an artistic titan than Pablo Picasso who offered this bit of sarcasm – “I have discovered photography. Now I can kill myself. I have nothing else to learn.”

Florin Firimita not only lives on, but learns something every day, drawing from his experience and vivid imagination to share his art with a widening, appreciative audience. •

Florin Firimita’s work can be seen on his website florinfirimita.com as well as on Gadcollection.com.