The Israeli Acute Paralysis Virus or IAPV, is the latest rampant virus to wreak havoc on honey bee colonies nationwide including its link to the outbreak of honey bee Colony Collapse Disorder that has taken place over the last decade in the U.S. In an uncanny new development, researchers at the University of Illinois at Urbana-Champaign have determined that the virus is capable of changing certain host behaviors and physical traits, particularly in social contexts, of one of the world’s most critical pollinators. According to a report from ecowatch.com, lead study author and professor of entomology Adam Dolezal says, “Somehow, the infected bees are able to circumvent the guards of foreign colonies, which they shouldn’t be able to do.” Previous research has shown IAPV is also responsible for infected honey bees being 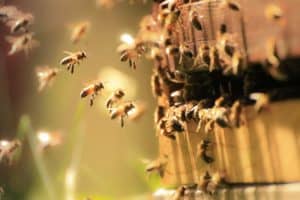 more likely to get lost when returning to their home hives.

In order to further analyze how IAPV manipulates infected honey bee behavior, researchers have utilized previous methods that employed an automated system to study bees’ use of trophallaxis – the regurgitation of food and other liquids to feed colony members. “Trophallaxis is essential to the spread of information and nutrition throughout the hive,” says study co-author and entomologist Gene Robinson, “but unfortunately, a behavior performed with such close social contact also allows viral infections to be transmitted through a hive.” According to ecowatch.com the findings show that the virus is evolving in ways that improve its ability to spread, which could be detrimental to honey bee colonies in the long-run. Human-introduced environmental changes create conditions that make emerging diseases more likely. A continuing problem as inorganic impacts on the environment become more pervasive in the twenty-first century.