Concerned citizens who live and work in Craryville, Copake, Copake Lake, Copake Falls, Hillsdale, Taghkanic and other neighboring communities in Columbia County, New York, will gather together tomorrow evening at a virtual town hall meeting to discuss concerns regarding a 500-acre, industrial-size solar installation proposed by Hecate Energy. The proposal, – referred to as the Shepherd’s Run Solar Farm according Hecate Energy’s website –  includes a 500-acre solar installation (roughly equal in size to over 300 football fields) at the crossroads of NY State Route 23, Route 7 and Route 11A in Craryville and Copake, NY and would abutt properties near Copake Lake and Hillsdale, NY.

“The fact is Hecate Energy is blatantly and unequivocally disregarding the Town of Copake’s zoning law,” says Darin Johnson of Sensible Solar for Rural New York, one of the primary advocacy groups in staunch opposition to the energy giant’s proposal. “It’s not only laws 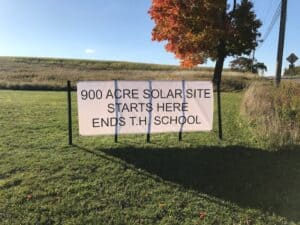 that are being disregarded, Hecate is ignoring public sentiment by advancing its proposal.” In 2017, the Town of Copake revised its own zoning code to prohibit utility-scale solar energy systems greater than ten acres in the Town of Copake as well as lands near Copake Lake and the surrounding hamlets of Craryville and Copake Falls. Despite the change three years ago, Illinois-based Hecate Energy has recently chosen to appeal directly to New York State officials for approval of its proposed industrial-scale solar installation through the submission of a Preliminary Scoping Statement. In response, Sensible Solar for Rural New York, along with prominent land conservation advocacy groups Scenic Hudson and the Columbia Land Conservancy plan to communicate with officials in Albany via the upcoming Zoom meeting as well as a barrage of public appeals.

“The site is in close proximity to more than 3,000 homes and farms, as well as the Taconic Hills Consolidated School,” said Johnson in a letter penned to Siting Board Secretary for the NYS Public Service Commission Michelle Phillips. “Using a formula developed by researchers at the University of Texas, homeowners in Craryville, Copake and Hillsdale who live in close proximity to the 500-acre solar field stand to see their property values decrease cumulatively by up to $15 million and the Taconic Hills Consolidated School’s property decrease by up to $3 million. Additionally, homes and farms directly abutting or in view of the utility-scale solar field will most likely become impossible to sell should the installation be realized.”

Similar sentiments were echoed by Peter Paden, Executive Director for the Columbia Land Conservancy a not-for-profit corporation that works with the community to conserve the farmland, forests, wildlife, and rural character of Columbia County. In his letter to Secretary Phillips, Raden argues the lack of a site plan from Hecate is on of the many problems with its proposal, “The absence of a site plan makes it impossible to comment specifically on many potential impacts,” he wrote. “…(those impacts) will vary depending on the layout and configuration of the multiple project components – where they will and will not be situated, and how they will be connected. Hecate’s Preliminary Scoping Statement leaves out important methodologies and procedures regarding assessment of a number of potentially significant impacts.” 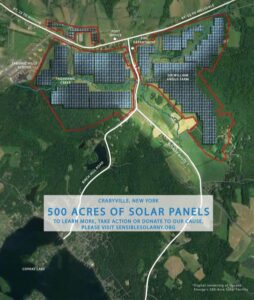 Scenic Hudson, a not-for-profit organization based in Poughkeepsie and dedicated to preserving the scenic, ecological, recreational, historic and agricultural landmarks of the Hudson River Valley echoed similar concerns about the solar farm’s potential impact. “The Proposed Shepherd’s Run Solar Facility has the potential to significantly impact natural, agricultural and visual resources, among others,” wrote Audrey Friedrichsen, an attorney for Scenic Hudson. “The Preliminary Scoping Statement contains very little information to help the public fully understand the range and size of potential impacts or be able to comment on the extent and quality of information that must be included in the application for the Siting Board to make its decision.”

“Like many of these projects that impact small, rural communities, it’s going to take voices of opposition to raise awareness,” says Johnson, who will speak at the October 28th virtual town hall. “Most solar fields are cited in remote areas. The community around the proposed site is dense in population — particularly as you get closer to Copake Lake. We feel it is important for those residents and neighbors to understand the size and scope of the project and to encourage folks to speak up about the potential impacts of such an expensive proposal.”

The Copake Town Board will hold a virtual Town Hall Meeting on Wednesday, October 28 at 7:00pm. 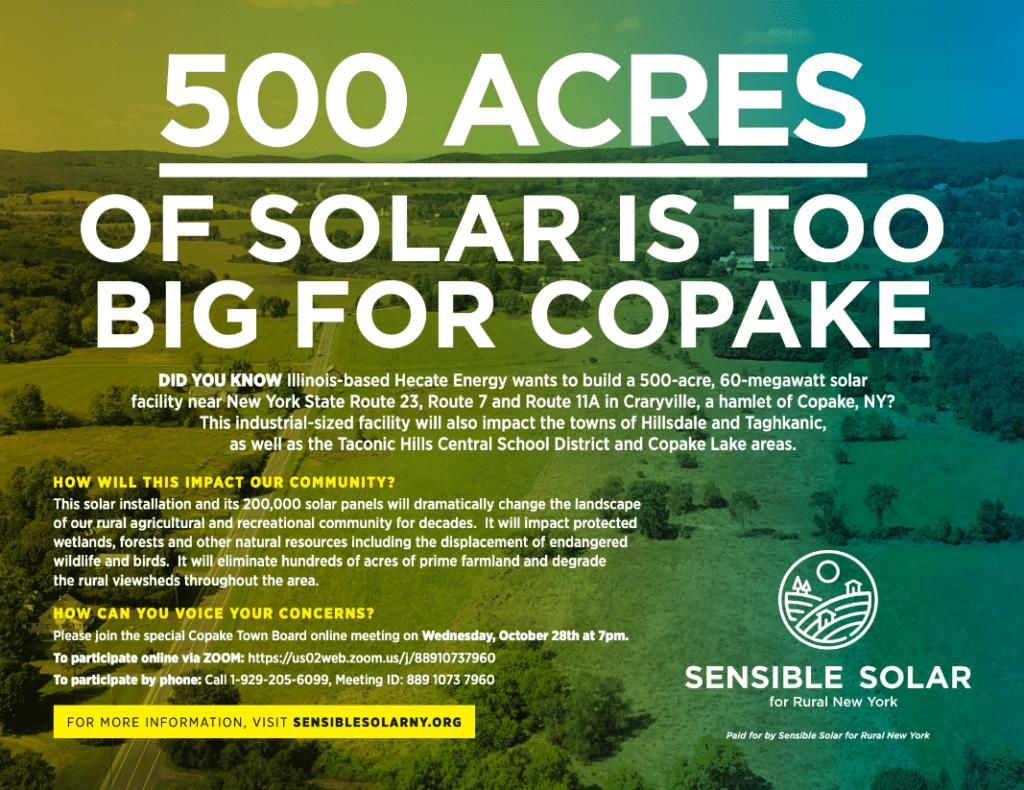