THE CELEBRATION IMPERATIVE OF “GODSPELL”

We’ll do the final paragraph, first, then get to the heart of the review.

The Berkshire Theatre Group production of Godspell runs Tuesday through Sunday evenings, inside the tent theater erected adjacent to the Colonial Theatre in Pittsfield, MA. There is a limit of 75 tickets available per performance at a cost of $100 per ticket. If at all possible … if your family budget can allow for that kind of investment … do not hesitate. Call the box office at 413-997-4444 or visit their website at berkshirethreatregroup.org for tickets.

What began as a graduate thesis at Carnegie Mellon University in the late 1960’s became a play with music. Godspell, Based on the narrative in the Gospel of Matthew, it focused on the intensely personal and socially revolutionary teachings of Jesus bookended by his reported encounter with John the Baptist and ending with his crucifixion. John-Michael Tebelak was responsible for the script with original music by Duane Bolick. If you want to read the source material, it’s the first book of the New Testament of the Bible. 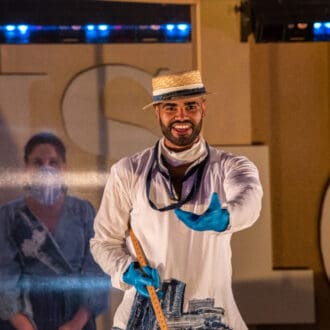 The freshness of the play attracted enough attention and support from Carnegie Mellon alumni that it was scurried to the off-off Broadway stage at Cafe La MaMa in New York, where a newly developed musical score by Stephen Schwartz was eventually substituted for the original … and the cyclonic ride began.

It was late 1970. The country was in a recession. The Vietnam War was raging. Richard Nixon was President. Four students were killed at Kent State University in Ohio. Jimi Hendrix and Janis Joplin had both died and Paul McCartney had announced that so had the Beatles.

And, in the midst of the doldrums and tensions of modern life, a simple musical emerged that seemed to speak directly in the face of daily realities. Godspell jumped from New York to Los Angeles, several other “road show” cities, then finally back to its off-Broadway debut and eventual move to Broadway. It became a certified hit.

As a paean to care, generosity, fairness, humanity and hope, it has continued to be staged in community theaters, church basements, high school gymnasiums and summer theaters ever since. Productions of Godspell had almost become a cliche for the safe, mildly amusing but basically boring until the boundless imagination of Kate Maguire, Artistic Director and CEO of Berkshire Theatre Group refused to watch American theater disappear in the face of COVID-19.

There had to be a way to present live theater … not simply one-person shows, which can be quite engaging … but live, musical, energized, inspiring, captivating productions.

As celebrated by the New York Times, both with a feature article outlining the extraordinary measures taken to protect cast, crew and audience as well as a glowing review from no less a revered critic as Ben Brantley, live musical theater has returned to the Berkshires.

In the heart of a summer that has been punctuated by closed theaters, cancelled festivals and “postponed” concerts, director Alan Filderman and choreographer Gerry McIntyre have walked through the door opened by Maguire and her tireless team, working with Actors’ Equity, the City of Pittsfield, the State of Massachusetts and countless other keenly interested organizations to assemble an energetic, supremely talented cast of young professional actors who sing, dance, act and completely enthrall the socially distanced audience.

Without apology, but rather deep enthusiasm, we could find no imbalance in the cast. Their voices are fresh, their immersion in the choreography that moves them around the move-able plastic shields made part of the stage set is elegant. As is often the case in a presentation of Godspell there are a sufficient number of local references and an abundance of seamlessly integrated commentary on the conditions we all experience to make this production seem almost painfully timely. The original debate that opens the script — The Tower of Babble — has been replaced with each actor speaking candidly about what their lives were like in pandemic isolation and the virtual disappearance of live theater. But, then the music begins. From despair to hope.

We all need to build “a beautiful city,’ even if that construction is only in our minds. We can all benefit from enjoinders to feed the hungry, clothe the naked, house the homeless and care for the downtrodden. We live in extraordinary frightening times. The radiant energy coming from the BTG parking lot tent theater stage is one of the best antidotes we can conjure.

Individual performances that are truly remarkable certainly include Nicholas Edwards as Jesus. He personifies the kind of deep emotional investment that carries the story forward, and does so with an acting elegance and singing bravado that capture the audience and refuse to let go until the final bows. His acting resume is reflective of a young actor who will continue on his rise to stardom despite the seemingly overwhelming impediments to the presentation of live theater in the foreseeable future. 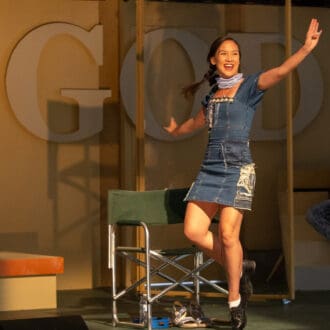 Sprightly Kimberly Immanuel is a source of a radiant light that glows whenever she is in the spotlight. The physical requirements of acting in isolation are enormous, and the entire cast rises to the challenge with beautifully timed gestures that reinforce the deep sensitivity of the play, its messages and its importance in a trying time. When Kimberly deftly slips from her wedge sandals to her tap shoes and punctuates her solo Learn Your Lessons Well, the audience erupts in applause with good reason. This is an incredible display of talent, and they are the beneficiaries of the experience.

Production credits, beyond the outstanding efforts and vision of the director and choreographer deserve applause of their own. Music Director Andrew Baumer has assembled a trio that elegantly supports the performers, socially distanced behind a curtain of their own off stage. Matthew Adelson’s lighting direction overcomes the potential pitfalls of lighting a broad, narrow stage inside a tent to punctuate the flow of the script, make it intimate and give each actor their moment.

If you’ll forgive (or potentially ignore) a personal note, we first saw Godspell in Los Angeles at the Mark Taper Forum in 1971. It was refreshing, light, in great counterpoint to much of what was happening in the very confusing and stressed out world. Flash forward 49 years to Pittsfield, MA and how the great mandala has turned full circle. The world is confusing and very, very stressed out. There is no “new normal,” only what happens today and how we struggle to cope with the chaos that surrounds us. What a great time for a revival of Godspell. The energy in Pittsfield may have been transmitted from brilliant cast to starving audience for only 2 hours, but the after effects linger and will certainly make the ensuing days a bit easier to manage.

Thank you, Kate Maguire. Thank you Alan Filderman. Thank you Nicholas, Kimberly and the rest of this magical cast. We really needed to be cast under a Godspell!

The Berkshire Theatre Group production of “Godspell” runs Tuesday through Sunday nights, inside the tent theater erected adjacent to the Colonial Theater in Pittsfield, MA. There is a limit of 75 tickets available per performance at the cost of $100 per ticket. If at all possible … if your family budget can allow for that kind of investment … do not hesitate. Call the box office at 413-997-4444 or visit their website at berkshirethreatregroup.org for tickets. 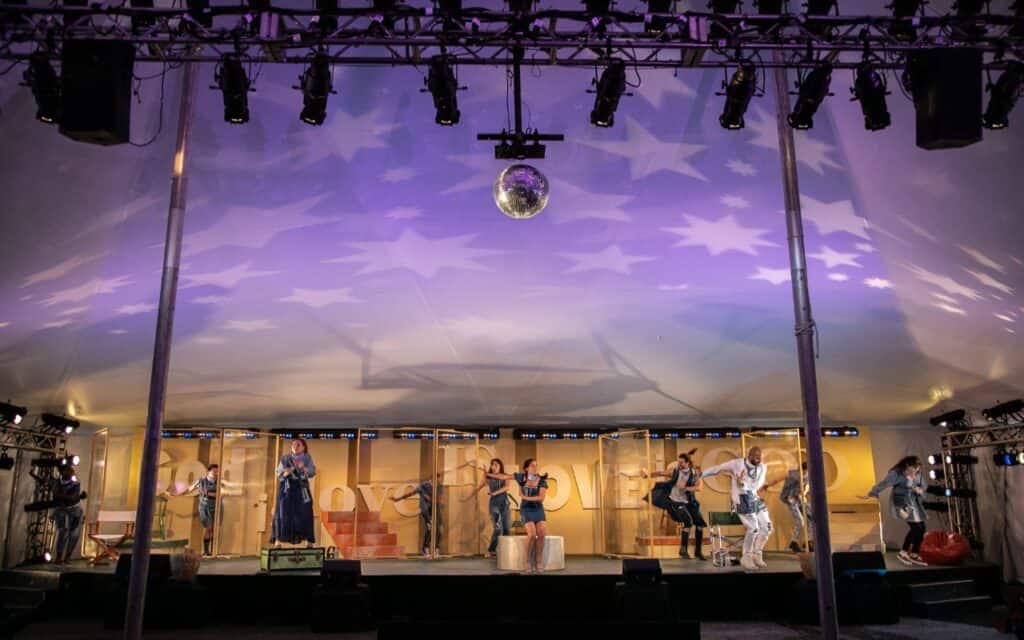