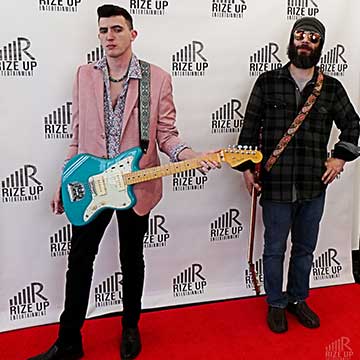 As things heat up for summer and life continues to feel like it did pre-pandemic, we’ll all be yearning to go out and have some fun. While we’re reveling in our newfound freedom and embracing the summer season, we’ll want to crank up the music and dance. Whether you’re looking for a fun night out or seeking a talented band to get your party going, you can count on the talent at Rize Up Entertainment based in Millerton, NY. If you’re a musician, you, too should explore the business’ offerings.

Music in the making

In 2011, Rize Up Entertainment initially opened its doors as an entertainment company. Alex Cooper is the visionary behind the venture. A music fan for as long as he can recall, Cooper dedicated nearly 20 years to the art of deejaying, performing as a hip hop artist, and working in and out of several recording studios as a producer/audio engineer.

“I recently decided it was finally time to put my knowledge and passion to use and converted my entertainment company into an independent label,” says Alex Cooper, president, Rize Up Entertainment – a record label and party entertainment service.

Although many of Rize Up’s original services are still being offered – including scheduling time at any of the company’s affiliated studios, booking shows for musicians, or offering its affiliated deejays and musicians for hire for parties and celebrations – the recently expanded company also operates as an independent record label.

Before launching Rize Up and bringing that business to where it is today, Cooper learned some valuable lessons on how to manage a business. For about a decade, he worked for his family’s business, Associated Lightning Protection Company Inc., in Millerton. Having served the business in various roles, Cooper has been able to gain a more comprehensive understanding of operating a business.

Before transitioning to the commercial sales and drafting side of business, Cooper worked as an installer and inventory manager. Via this revenue stream, the music enthusiast has been able to comfortably fund side projects in the music industry.

Although other record labels and entertainment companies are certainly plentiful, Rize Up Entertainment has a new spin. “We like to think of Rize Up Entertainment as an artist-run label. Any artist or creative signed on with us is treated as an equal, which means that they have control over their creative processes, and we are simply there to assist,” reveals Cooper.

Cooper’s vision for Rize Up revolves around his own guiding principles and the core values of his business. He will ensure that Rize Up remains a haven where musicians, artists, and other creatives can feel secure with everything from signing on – to reaching out for assistance and opportunities.

“Today’s music industry is far from being in favor of the artists behind the songs we listen to. Through Rize Up Entertainment, I plan to be a part of creating meaningful change,” says Cooper.

Music Mondays w/ MAZEMENT is where Cooper shares music news and spotlights his interviews with artists from around the globe. The podcast airs on the final Monday of each month. It has featured many talents from legendary deejays such as DJ Rob Swift (The X-Ecutioners) and DJ Johnny Juice (Public Enemy) to music industry veterans such as producer Lee Evans.

“Ever since the band was featured, we’ve been in touch with one another. I finally had the opportunity to see Corey Rieman & The Dilemma Band perform locally. That’s when I remembered my initial impression of their talent and recognized the potential behind the band’s frontman and music,” says Cooper.

After being invited to the band’s recording studio in Avon, CT, a deal was signed. Cooper describes the signing as a “surreal moment.” After being immersed in the music industry for most of his life, Cooper looks forward to elevating the band’s branding, releases, and overall potential.

“We take pride in Corey Rieman & The Dilemma Band’s diversity and the power they bring to every performance. I look forward to exploring what we can accomplish together,” says Cooper.

“I’m so proud to be working with Rize Up Entertainment. I can’t wait for everyone to hear what we release next,” says Corey Rieman, frontman of The Dilemma Band.

Corey Rieman & The Dilemma Band traces its history back to 2016. It began as a three-piece band – a trio of friends happily playing music they love. Although a passion for music remains, the original band members have moved on to other projects and new ventures.

Enter Avon, CT’s Corey Rieman. This musical talent has formed a new identity with the latest iteration of the band – one that is centered around Rieman’s skillset as a multifaceted musician. Beyond vocals, he plays guitar, the harmonica, and keys.

When it comes to Corey Rieman & The Dilemma Band’s sound and style, they hit all the right notes. They mix audience favorites with original music. “They’re chameleons – they can literally play anything. From a producer’s standpoint – regarding publishing opportunities – that’s a bonus,” concludes Cooper.

If Cooper had to categorize the music, he’d label the sound as “indie rock with a hint of progressive.” Some comparisons from yesteryear: Talking Heads, The Cure, and the Pixies.

The band members share backgrounds that started with a love for rock, blues, funk, soul, folk, indie, new wave, and world music. This versatility enables them to be a top choice for corporate events, weddings, and other celebrations.

Corey Rieman & The Dilemma Band continues to be among the top three most booked bands on The Bash – one of the largest booking agencies in America. They have earned several recognitions, including The Bash Best of 2020; The Bash Gold Member; The Bash Rapid Response; 25+ Verified Bookings; and GigSalad’s Top Performers (GigSalad is a full-service platform for booking gigs).

The band has a large following with more than 14,000 likes and Facebook followers. They have played in some of the most famous venues on the East Coast including The Bitter End in Manhattan; My Father’s Place at The Roslyn Hotel in Roslyn, NY; Toad’s Place in New Haven, CT; and Wall Street Theater in Norwalk, CT, among other venues. They also played at the now defunct City Winery on the Greenway in Boston and The Haunt in Ithaca.

In June 2021, Corey Rieman & The Dilemma Band was the featured band at the 175-anniversary celebration for Lake Compounce Amusement Park in Southington, CT. The band also headlined at Six Flags Great Adventure in CITY.

Corey Rieman & The Dilemma Band just launched its Sweet Summer Tour. They will be performing at venues up and down the east coast – from Maryland to New Hampshire. A few local haunts will be included in the mix such as the June 6 and July 1 gigs at Farley Macs in Simsbury, CT.

The band frequently invites special guests such as Danny Reilert and Dan Graziano (Graz) to perform with them. “They continue to add diversity and surprises to each performance with their ever-evolving setlist,” adds Cooper.

Recent reviews for Corey Rieman &The Dilemma Band include: “Most professional, classy individuals to do business with. Very entertaining. Awesome musicians. Really knows how to work the audience. They were so liked, and we already booked them for next July 4th. Highly recommended.”

Another accolade: “The Dilemma was excellent. They played at the perfect volume for an outdoor, daytime event, got the entire crowd going, and stayed for a few encores because nobody wanted to see them go! They were amazing! Book them ASAP!

The Sweet Summer Tour ends August 19. Music aficionados can visit the band’s website (thedilemmaband.com) or Facebook (facebook.com/the.dilemma.band.official) to find out where the band is playing locally in the future. Music fans can also visit the website to stay tuned for upcoming releases.

On August 7, Rize Up Entertainment is sponsoring and providing music for The Sunset Fest at The Veterans of Foreign Wars (VFW) in Canaan, CT. This festival will host local artists and other local, creative vendors in a fun, positive environment.

“In June 2016, we lost an amazing, creative, and very imaginative person, Aubrey Schmitt. We want you to join us by celebrating the life she lived! By bringing local artists, musicians, and creative minds together for one event, and sharing it with everybody we know and would love to meet,” says the family and friends of the late Aubrey Schmitt.

Aside from taking the Corey Rieman & The Dilemma Band as far as Cooper and his team can regarding public awareness and success in general, he’d like to get them to a point where big-name companies are taking notice.

“Our main focal point, for the time being, is getting their branding and marketing up to the professional quality as we continue to record and plan future releases. Our services that will be involved in this process will consist of graphic design, PR, production, audio engineering, and more.