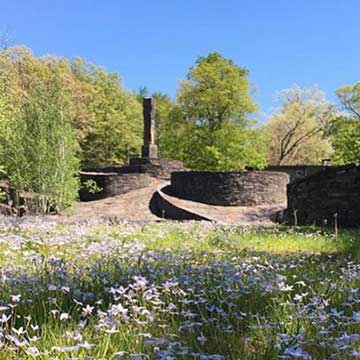 An abandoned bluestone quarry in Saugerties, NY,  became home to Opus 40 – an extraordinary sculpture park and museum that boasts 6.5 acres of earthwork sculpture and more than 50 acres of meadows and forest. Considered by many to be “the Stonehenge of North America,” the impressive site welcomes more than 20,000 visitors each year.

It all began with one artist. Rather than overlooking the idle quarry, Harvey Fite saw possibility. The bluestone quarry, which once supplied New York City with building material, could be used as a source of raw material for the sculptures Fite had yet to create.

A visionary is born

On Christmas Day in 1903, Fite was born in Pittsburgh’s Steel City. When he was just a child, his family relocated from Pennsylvania to Texas. His father worked with his hands. By trade, he was both a carpenter and a farmer.

Fite’s initial career plan focused on academics. He spent three years in Houston studying law, before switching gears. In 1926, Fite enrolled in St. Stephen’s College, which was founded in 1860 and later became known as Bard College. Eventually, creativity and self-expression dominated and Fite left Bard College to join a repertory theater company. He went on to perform with a local theater in Woodstock, NY.

While he was engaged with the acting group, Fite discovered his passion for sculpting. By 1930, he spent much of his time carving. His skills soon gained recognition and Fite was asked to head the fine arts department at Bard College. In 1933, he joined the faculty.

The artist, sculptor, and painter continued to teach while he also continued to learn. His education included study abroad in Italy in 1935 and 1936 under sculptor Corrado Vigni.

In 1938, Fite purchased 12 acres of former bluestone quarries in the hamlet of High Woods in Saugerties. “Originally he thought of the abandoned site as a source of material for his sculpture, but gradually he began to create art out of the abandoned quarry and a vision for Opus 40 was born,” says Caroline Crumpacker, executive director of the Opus 40 Sculpture Park.

The same year, Fite built a house and studio on the eastern edge of the quarry. His inspiration for the sculpture park emerged from a trip Fite took in 1939. A Carnegie Institute fellowship led Fite to Copán, Honduras, where he did restoration work. It was there that Fite studied Mayan stonework techniques. The following spring, he began organizing the bluestone that was scattered about the Saugerties property.

Although he began with an idea to create circular pedestals to showcase his bluestone sculptures, once the artist began displaying his works, he reconsidered his plan. Fite’s sculptural works were dwarfed by the monumentality of the stonework that he created and the sight of Overlook Mountain, which was just beyond it. Fite decided to move his sculptures to other locations on the property. A nine-ton bluestone boulder was placed at the center, using techniques developed in ancient Egypt.

Fite assumed that it would take him 40 years to create what he envisioned for the site, so he gave it the name, Opus 40. It now consists of a six-acre sculpture made entirely of bluestone. It boasts pools, terraces, tunnels, bridges, and a large amphitheater as well as two fountains and four large bluestone sculptures.

Fite used “dry key construction” to form the many walls, platforms, grottos, and tunnels at Opus 40. The ancient technique he employed relied on the larger stones to serve as a means of support for the smaller stones. The word “dry” refers to the fact that that structures lack cement and mortar as a binding agent.

This dry key method has successfully preserved Opus 40 for more than 40 years. With careful maintenance and conservation, Opus 40 could potentially last hundreds of years more.

Fite lived in the house that he built on site until his passing in 1976. He spent 37 years on the property. The artist lived there with his wife Barbara Fairbanks, who he married in 1944. The young couple initially lived there with Barbara’s young boys, Jonathan and James (Tad) Richards.

In 1978, Barbara Fite formed the non-profit organization, Opus 40, Inc. Her founding vision was to showcase and preserve Fite’s work, create opportunities for engagement with sculpture and the arts, and allow the artist’s work to frame live performances.

Opus 40’s lineup of performers have engaged with audiences in, on, around, and throughout the pristine grounds. They’ve creatively adapted their performances to incorporate the beauty of the terrain, nature views, and acoustics that are unique to the site. While enjoying the performances, guests are also treated to striking scenery of the Catskill Mountains just beyond.

The list of entertainers who have performed at Opus 40 includes Richie Havens, Pete Seeger, Happy Traum, Sonny Rollins, The Felice Brothers, and Jimmy Cliff, to name a few. In recent years, programming has tripled and Opus 40 now hosts everything from music and theater to world music, puppetry, dance, and outdoor movies.

Many different theater stagings have occurred on the grounds. They range from Macbeth to more modern rock musicals such as Hair. In total, the many talents who have performed at Opus 40 have garnered Grammy Awards, National Endowment for the Arts Awards, an Academy Award, a National Medal of Arts, and a MacArthur Genius Award.

Opus 40 also hosts a variety of other events, festivals, and activities. These include everything from educational field trips to nature walks led by Audubon educators, art workshops, guided tours, and guided mushroom, foraging, and bird watching walks. Yoga and qigong classes are also offered on the sprawling grounds.

The Opus 40 grounds have also played host to the Opera Ebony competition – an opera company that is guided by a mission to mentor and afford opportunity for under-represented talent on, off, and behind the stage.

As the temperatures drop, a series of activities will be unveiled. In November and December, Opus 40 welcomes the public for star gazing and light shows through its partnership with New York PhotoBus. Sports enthusiasts can also visit Opus 40 for snowshoeing while holiday revelers can shop at the holiday pop-up sale.

All year long, Opus 40’s dramatic landscape serves as the artistic backdrop for destination weddings, as well as photo shoots for top publications such as Vogue and Nylon. Famed photographer Nigel Barker recently used Opus 40 for a backdrop for a fashion shoot. Barker cites Opus 40 as one of his favorite shoot locations. The Opus 40 site is also home to a gallery and the Quarryman’s Museum, which presents a collection of tools.

Opus 40 is currently undergoing a profound conservation process. In September 2021, the non-profit received a prestigious $300,000 grant from the National Parks Service, in tandem with the Institute of Museum and Library Services. Its mission is to advance, support, and empower America’s museums, libraries, and related organizations through grantmaking, research, and policy development.

Through the Save America’s Treasures program, the grant will help preserve this nationally significant historic property. The grant requires a one-to-one match, so in addition to the $300,000 Opus 40 received, it was able to raise $200,000 more. The funding is being used to support a multi-year program of sculpture conservation, which will involve mentorships and educational programs as well as preservation.

The sculpture repair and conservation will be guided by a qualified structural engineer and a team of expert stonemasons. Tad Richards and other descendants of Harvey Fite will offer guidance on the project.

Opus 40 staff will expand the impact of this significant grant through the creation of a manual on caring for the bluestone sculpture. It will enable future staff to caretake the sculpture with expert guidance. It will also provide opportunities for mentoring in the drystone techniques. The grant will also provide visitors with regular presentations with the stonemason team. Finally, it will support a blog that details the process on the Opus 40 website.

Opus 40 welcomes guests five days a week from April through November. It is open year-round for other events, educational trips, guided tours, weddings, and more. A serene meadow surrounds the site. Visitors are welcome to wander through the grounds as well as the surrounding meadows. While marveling at the remarkable sculpture, and pondering the level of precision and skill that went into it, they can enjoy the tranquility of the forest area and a view of Overlook Mountain just beyond.

For more information and to check hours of operation, visit www.opus40.org. Opus 40 Sculpture Park & Museum is located at 356 George Sickle Rd. in Saugerties, NY. Call (845) 246-3400 or visit them online for further information. 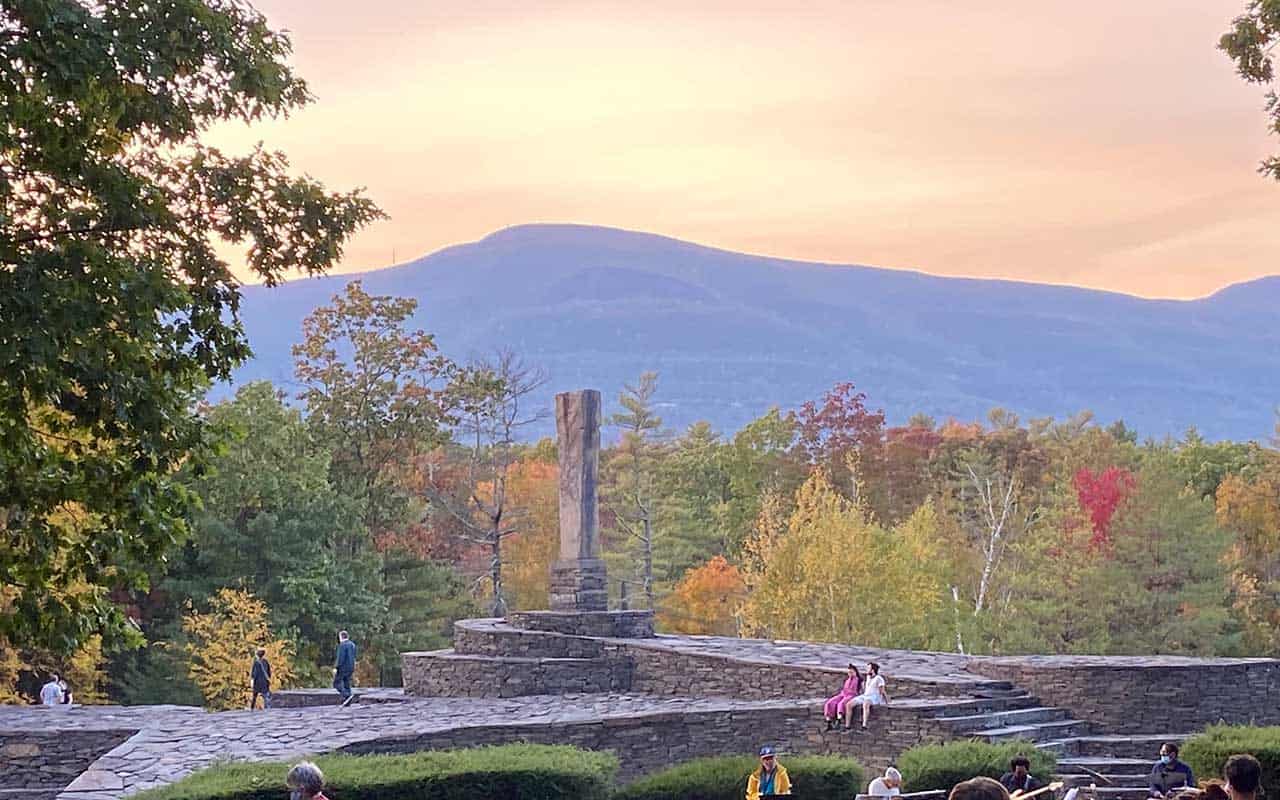