Women’s History Month is the perfect time to celebrate Elinor Mettler, who co-founded the Roeliff Jansen Historical Society (RJHS) in 1974. Elinor, known for her dynamism and seemingly limitless energy, was also a major force in saving and preserving the “Old Falls Copake Church,” built in 1892, now housing the Roe Jan Historical Society’s Museum. Creating a historical society within a re-purposed structure rescued from neglect, also served to underscore the significance of local history and that of historic buildings everywhere.

Among her accomplishments, in 1973, Elinor started the Roe Jan Independent, a local newspaper she edited and published for 13 years in the Hamlet of Copake. She was the engine behind the movement to establish the Harlem Valley Rail Trail (HVRT), transforming abandoned  tracks into shaded avenues for walking and biking. The HRVT will ultimately extend all the way from Wassaic to Chatham, New York. An advocate of bicycling, Elinor also initiated the Roe Jan Ramble, each year attracting cyclists from far and wide to the Roe Jan area. Elinor made two films about local agriculture, recorded oral histories, and authored several books. And, she raised six children. Elinor’s equally vibrant daughter Jeanne has recently been elected to the Office of Copake Town Supervisor. 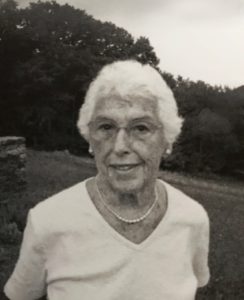 Following Elinor’s death in 2011 at the age of 85, former RJHS President Clara Van Tassel said “There was nothing she could not accomplish. I’ll always think of her as a role model for women…”

Elinore has had a huge and enduring impact on the Roe Jan, the southeastern section of Columbia County that takes its name from the winding waters of the Roeliff Jansen Kill.

To learn more about the vast history of the Roe Jan area, call the Roeliff Jansen Historical Society (518) 329-0652 or visit roeliffjansenhs.org for hours and information