Roeliff  Jansen, a would-be explorer and colonist of Scandinavian origin, came to New Netherland from Amsterdam in service of wealthy Dutch Patroon Killian Van Rensselaer.  As legend has it, in 1632 he discovered a major tributary to the Hudson River still bearing his name – the Roeliff Jansen Kill. To this day, his name is ubiquitous in Columbia County, where the river ebbs and flows. Often shortened to Roe Jan, he is the namesake of the Roeliff Jansen Historical Society, as well as a host of other organizations, businesses, parks and publications almost too numerous to count.

While Roeliff’s name appears everywhere, that of his Dutch wife, Anneke Jans remains virtually unknown. Her own colorful story clearly indicates that Anneke must have been rugged, resourceful and resilient. During her marriage to Roeliff she made the perilous Atlantic voyage in a cramped sailing ship, was among the first settlers of upstate New York, bore many children, and during the first two years alone, helped transform completely untamed wilderness near present day Albany into a profitable farm called “de Laets burg.”

Returning in 1636 to the Island of Manhattan, Roeliff, now employed by the Dutch West India Company, was given rights to 62 acres along the shores of the Hudson River to clear and farm tobacco. Then, later that same year, Roeliff Jansen died, leaving Anneke, her mother and her children to fend for themselves in the tiny, turbulent settlement of New Amsterdam.

Reportedly a woman of indiscriminate passion, Anneke not only survived, but married the leader of the Dutch Reformed Church who was one of the wealthiest men in the colony, the “beer swilling”1 Minister Everardus Bogardus.

“A man of uneven temper, Bogardus soon found himself hard put defending his new wife’s high-spirited ways. On one occasion he verbally attacked no less than [Dutch] Governor Van Twiller at a wedding feast, giving his reason (as the event was later reported) “that he called your wife a whore.”2 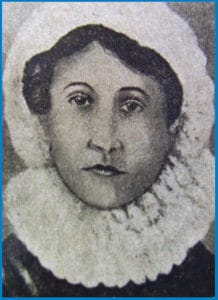 But the Marriage endured, produced more children, and merged the couple’s vast landholdings until, on his way back to Holland to be tried for his part in an insurrection against the last Dutch General-Director Peter Stuyvesant, the Minister drowned in a shipwreck off the coast of Wales.

Anneke, widowed a second time, retired to a quiet life upstate, and divided the 62 acres in lower Manhattan equally among her heirs. The heirs, in turn, sold what they perceived as  unproductive property to the first English Governor of New York, Frances Lovelace, who transferred it to the Duke of York, nominal protector of the colony, in payment of debts. The land remained in royal hands until it was gifted to the parish of Trinity Church in 1704. Fifty years later, Anneke’s descendants, seeing Manhattan land values soar, contested the sale, initiating what became the most famous case in the annals of New York real estate law, lasting no less than 150 years. Finally, in 1909, the courts decided once and for all in favor of Trinity Church.

But today, you can stroll through Duane Park, at Hudson and Duane Streets in Manhattan, New York City’s first dedicated public park, and read a bronze plaque which says:

The park is the last remnant of the greensward of the Annetje Jans farm, granted

second minister of the Dutch Church of New Amsterdam, and the farm became

The area surrounding Duane Park, now known as Tribeca (Triangle below Canal Street) has a wealth of magnificent cast iron buildings. In a further twist of history, James Bogardus, a direct descendent of Everardus and Anneke, famously pioneered the construction and design of cast-iron buildings during the 1840s.

To learn more about the vast history of the Roe Jan area, call the Roeliff Jansen Historical Society (518) 329-0652 or visit roeliffjansenhs.org for hours and information

1. Shorto, Russell, Island in the Center of the World, The Epic Story of Dutch Manhattan and the Forgotten Colony that Shaped America, Vintage Books, 2005, page 165.