It was years ago that they introduced me to a wine that I now associate with summertime: Vinho Verde. This is a Portuguese wine that’s named after the region in which it’s produced, which extends from the Portuguese-Spanish border in the north down to the Atlantic coast.

This wine is a winner on so many fronts. First, it tastes great. It’s defined by its bright acidity, low alcohol, and slight effervescence, which was originally the by-product of fermentation in the bottle, but is now typically added to meet Vinho Verde drinkers’ expectation of that delightful tingle on the tongue. The wine is made from a blend of Portuguese grapes, though you can find more and more single varietal Vinho Verdes. Second, it’s so affordable!

Typically a bottle costs about $8. Third, being on the acidic side, it’s the perfect pairing for a wide range of summer foods. Salads, fish, tapas, sandwiches, grilled fare, even fruit salads and cookies. 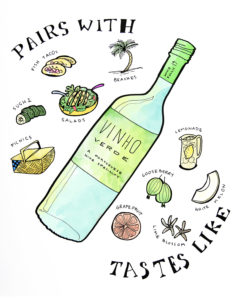