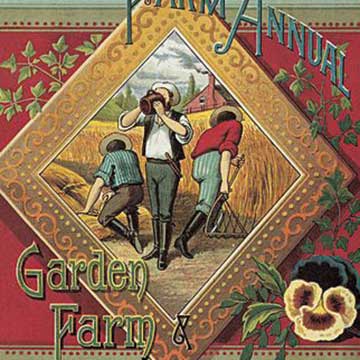 Here we are again: trying to avoid the cold and fight off the cabin fever that sets in. The landscape is white, frozen, pretty bleak. We can only dream of gardens and flowers, fruit trees and tomatoes and hydrangea blooms. Our dreams are aided by our beloved winter companions – the seed catalogs that come pouring in at this time of year, containing color, inspiration, and new possibilities. Usually, we toss them by the time Spring arrives but several institutions have been collect-ing these catalogs for hundreds of years and these collections document and celebrate the history of gardening in America.

Seed catalogs have been a part of the gardener’s world for centuries. In
the eighteenth century, English seed catalogs reached American growers by ship from Britain. Early seed catalogs included essays, notes about the cul-ture of plants, instructions on how to plant them, how to care for them, and how to harvest their fruit. The catalog sometimes contained general articles on gardening and farming. Over long cold winter nights, then as now, the faraway customer could read the catalogs not only for seed ordering but for information on gardening, plant cultivation, and new crop ideas.

The fate of the early settlers of this country initially lay in the seeds that they brought with them to their new homes. No one knew what they would find here, and a collection of food crop and medicinal herb seeds was essential baggage. Most saved and traded seeds amongst themselves, and with the local Native American populations. British seed companies supplied what the settlers could not get in the New World.

The origins of the American seed catalog are most often attributed to David Landreth, who founded the first American commercial seed company in 1784. Landreth sold seeds to George Washington, John Adams, Thomas Jefferson, and others. He introduced the white potato, zinnias, and tomatoes to the American garden. He even sold seeds of the botanicals sent from the Lewis and Clarke expedition, among them the osage orange, the snowberry bush, and new varieties of beans and corn.

The British garden and its inﬂuence in North America

It wasn’t until the nineteenth century that North American nurserymen began to grow flowers and ornamental plants commercially, largely inspired by the gardening industry in England. The tradition of British gardens was America’s primary infl uence in land-scape design and development. British nurseries were only too happy to expand their customer base and used catalogs to promote the new interest. As the business shifted, or added focus on ornamentals, the American transplants were hungry for the new ideas.

Seed and bulb merchants in Britain were largely responsible for this shift. They used their catalogs to promote gardening as a respectable and desir-able activity for the emerging middle class. “…Nothing more conspicu-ously bespeaks the good taste of the possessor than a well cultivated fl ower garden.” Wrote James Thorburn in his 1847 catalog.

J.M. Thorburn and Co. was an early seed company founded in 1802 in New York, with English roots. Thorburn’s catalogs brought the British gardening enthusiast detailed information on plants and how they performed in America. They listed seeds, plants and bulbs, and prices for everything. Independent traders and representatives of seed and nursery companies played an impor-tant role in distribution and delivery in these days before reliable mail service.

Burpee and the growing seed business

The story of W. Atlee Burpee is an example of the trends of the time. Mr. Burpee began his business when he was a teenager, mostly concentrating on feed and poultry breeding. The infant science of genetics fascinated him. By the 1880s, the W. Atlee Burpee Company was supplying the Northeast as well as the boom-ing plains states with seed as well
as livestock. However, many of the European seed stocks Burpee acquired had to be adapted to American growing conditions, either by means of hybridization (Burpee created the first hybrid vegetables) or selective breeding for desirable characteristics.

Burpee became a household name, and the largest seed company in the world by the 1890s. In those years, farmers rather than home gardeners made up the majority of customers; the catalog was called Burpee’s Farm Annual, and a lot more catalogue space was allotted to corn and cabbages, melons and beans, potatoes and squashes than to flower seeds and bulbs.

Catalogs were intended as market-ing tools, describing the inventory of the current year. Yet they often included articles and advice written by well-established plantsmen. The earliest American seed catalogs preceded the first published book on gardening by some 30 years. American nursery-men and women of the nineteenth century taught their readers about horticulture. They were America’s fi rst garden writers, and played an impor-tant role in teaching basic gardening techniques as well as the aesthetics of (English) gardening. Through expand-ing the American market for garden-ing products, importing plants, trying them out in the new environment of American soil, and working on plant adaptation, they contributed to the development of a new American plant pallet and style, as well as creating a new American industry.

The effects of modernization

Building on the ideas and methods of the fl edgling businesses of Landreth, Thorburn, Burpee and others, new nurseries opened selling ornamentals and bulbs as well as food crops. After the Civil War, reconstruction pro-duced rapid improvements in printing technology, which meant that new engraving techniques could be used to glamorize the appeal of catalogs. Rail transportation as well as reforms in the US mail system meant that orders could be received and delivered in much less time. These changes cleared the way for mail order businesses to flourish. Companies distributed catalogs for free and were able to ship seeds and plant material at cheaper prices.

Commercial nurseries and green-houses flourished throughout the United States after the Civil War. Plants and fl owers became increas-ingly popular for social occasions such as funerals, weddings, and parties, and Victorian interiors called for houseplants such as palms and ferns. Nursery owners would display their plant wares in their catalogs, and often promote popular uses and designs for planting. Looked at today, these catalogs provide historians with insight into the aesthetic sensibilities and the infl uences that helped to form those sensibilities over two centuries. To historians of landscape design, and those involved in the restoration of landscape and gardens, these catalogs provide an invaluable record of avail-able plants, garden choices, and styles over the past 200 years.

Park Seed Company published its first catalog in 1868, and three years later initiated a monthly catalog it called The Floral Gazette. The Gazette was more magazine than catalog. It included articles on gardening and plants, but encouraged readers to trade seeds bulbs and plants among themselves. It accepted advertisers, many of whom were small seed dealers and nursery owners. By 1918 the readership was around 800,000. Among the targeted audience were home market gardeners, amateur and professional landscape gardeners, and professional florists.

World War I and photography

The first World War temporarily cut off exports from Europe to the United States, greatly stimulating American agricultural and horticultural production. The amateur gardening market was well established by then and demand grew for new varieties of plants. Marketing was in full swing and the catalog business boasted of their new varieties with descriptive titles like “Mammoth,” “Colossal,” and “Perfection.” The more com-petitors appeared, the more lavish the seed catalogs and packaging became, all in an effort to grab a share of the booming American garden market

Artwork became an important distinguishing feature in the seed business early on. As printing became cheaper and techniques improved, catalog covers became more elaborate and illustrations of individual plants became common. Engraved covers of catalogues from after the Civil War tend to have a variety of images, patterning, and gorgeous colors. Black and white photographs became common in these catalogs during the 1890s, shortly after Kodak introduced the first handheld camera in 1888. The pictures it produced were less than ideal for marketing purposes, but photography was hyped as a more “honest” form of description. From 1890 to the start of World War I, companies continued to use elaborate chromolithographs for cover art and engravings for individual plant descriptions. Gradually photographs replaced hand drawn imagery in garden catalogs, and after the 1920s hand-drawn artwork had all but dis-appeared.

As it has in so much of our lives, the internet is changing the mail order business. Printed seed and nursery catalogs are becoming an endangered species. Many gardeners enjoy the ef-fi ciency of online ordering but some, myself included, still like to browse the illustrated catalogs at their leisure. I do order online, but only after selections are made from browsing print catalogs. The catalog arriving in my mailbox is a glorious reminder of spring and a new season coming that I would miss if companies stopped producing them.
Some newer companies seem to be taking cues from the past and re-introducing artwork into their catalogs and seed packaging. These companies recognize the long history of gardening businesses refl ecting their aesthetics in their marketing. Most catalogs use photographs now, but most still have a distinctive aesthetic sense. I enjoy the return to hand-drawn images but I also think that it is the overall artistic component that makes the seed catalog such a pleasure, and this is less dependent on medium than one would think.

In the gardening world, publishing is big business and these days many of our most knowledgeable plantsmen and women write books on their subjects, rather than contribute to catalogs. While catalogs still provide education and ideas, they rarely contain the in-depth explorations we gardeners might be looking for. The advice and education we receive from expert plantsmen and women, people who know their plants like we know our pets, is a comfort and an inspira-tion, even though now we frequently must buy their books to really educate ourselves.

Many people have differing views of the future of the garden catalog. Some see it as being subsumed by the internet, others believe, as I do, that there is something about the experience of flipping through the pages of a garden catalog that cannot be replaced. Most likely it will all come down to dollars and cents, as all things seem to in this country of ours. If that is true, and catalog produc-tion proves too expensive, it will be a crushing loss to those of us here in the dark cold New England winters, waiting for, and dreaming of, spring.