A cobbler is a deep-dish baked fruit dessert with a thick biscuit topping. Traditionally, the rich fruit stew is the base. Some like to bake a cobbler with the biscuit on the bottom too, but we feel that isn’t a true cobbler. That’s more like a deep-dish pie! It is believed that the name “cobbler” got its name from the biscuit-like topping resembling cobblestones. Cobblers were created by British American settlers who lacked the proper ingredients and equipment for pie. Lucky for us because cobblers are just as tasty as pie but half the work!

When we make a dessert, we always have plenty of taste testers happily volunteering to taste our baked treat. This cobbler was tested by two individuals that love a good dessert. It was such a hit that it was gobbled up entirely within minutes. So, we suggest if you are making this dessert, you make two!

Cobblers can be made with apples, blueberries, rhubarb, etc. It doesn’t have to be made with fresh peaches, but we just happened to have a big basket of freshly-picked peaches sitting on our counter. We had already made peach pancakes and thought, “Hmmmm, let’s make a cobbler for the September Recipe of the Month.” Peaches are one of Olivia’s absolute favorite fruits. There is nothing better than peeling a fresh, ripe peach and having the juices run down your arms while you bite into its deliciousness.

For the recipe, which is rather simple (we like simple), you’ll need:

Combine the cornstarch, sugar, and water in a medium saucepan over medium heat. Add the peaches and cook until mixture thickens, about 8-10 minutes, stirring occasionally. Turn off the heat and add in the butter and lemon juice. Pour into an 8” round baking dish and set aside.

Combine all ingredients and beat with a spoon until the batter is smooth. Drop spoonfuls of the batter on the hot peach mixture being sure to cover most of the top but don’t worry as it spreads over peaches during baking. Sprinkle the batter with half a tablespoon of sugar and then pop it in the oven. Bake for 40-50 minutes.

Beat 1 cup of whipping cream until slightly thick. Add the cinnamon and honey, beat until fully combined (be careful not to over whip or you’ll have honey butter).

Serve warm, topped with the honeyed whipped cream. It is also great with vanilla ice cream. 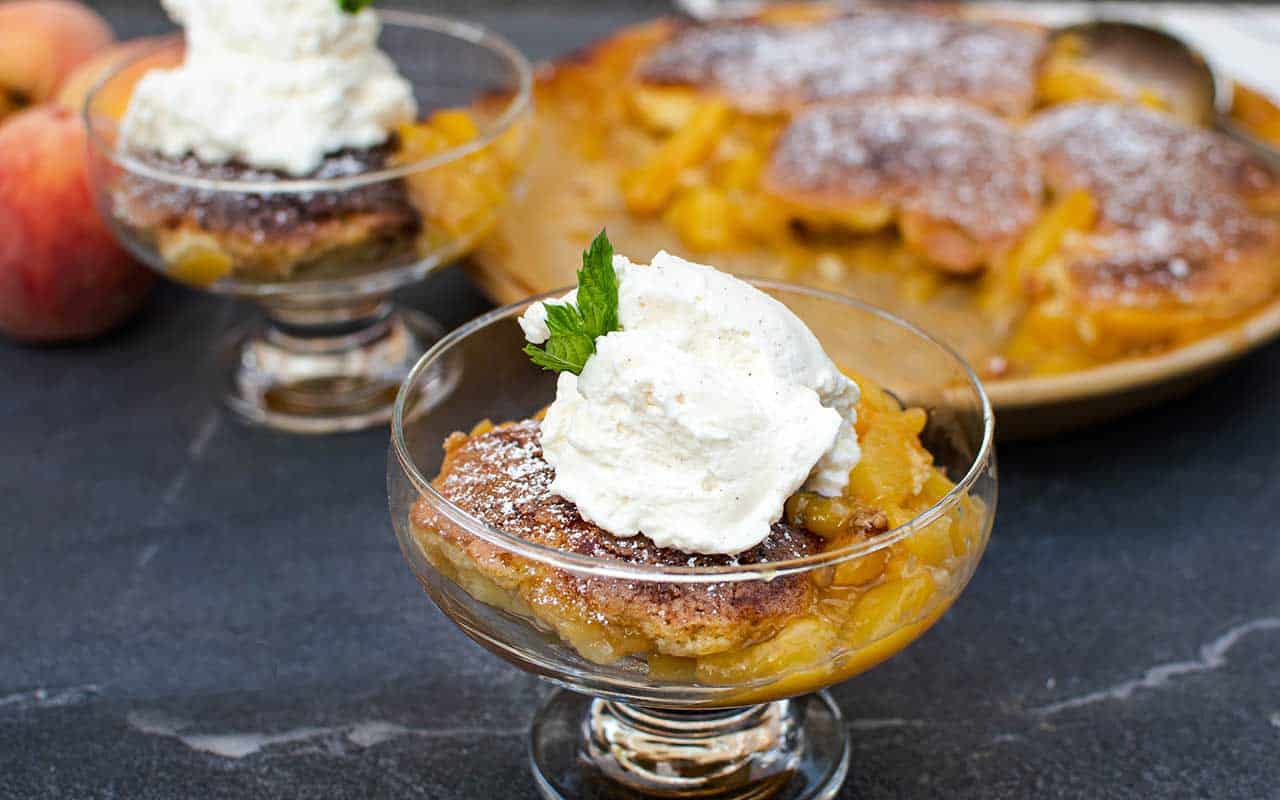