When did planes first fly from this airport?

A couple of farmers started flying from their potato field here in 1909, not so long after the Wright’s first flight in 1903. The Modolo brothers created an actual airstrip in 1914. In those days it was called “anywhere” airport. Walter Koladza, a former test pilot, purchased the airport at the end of World War II and owned it until his death in 2004. Walt replaced the grass airstrip with asphalt in the late 1950s. Currently there are only six or seven airports operating in Massachusetts that are privately owned but open to the public.

How did you end up owning an airport?

Walt Koladza and his wife Louise had no kids and wanted the airport to continue operating. They didn’t want to sell it and have it turned into a housing development. Out of the kindness of their hearts they gave it to four people who were committed to keeping it as an old-fashioned public airport with no fences. Eventually I became the majority owner.

How long is the runway?

The runway is about 2,600 feet long and 50 feet wide. Private jets need a runway that’s at least 4,000 feet long and have to land in Pittsfield or Columbia County Airport in Hudson, NY. Planes from single engine Piper Cubs to PC12 Turbo Props can land and take off here. There’s no control tower but CATF, Common Air Traffic Frequency, is always monitored for pilots wanting to land. Helicopters also land here. Once or twice a week Life Star helicopters fly in to take critical patients arriving by ambulance from Fairview Hospital in Great Barrington to trauma centers in Albany or Hartford. There are night lights on the strip that can be switched on remotely; however, only experienced pilots who know the airstrip are permitted to land after dark.

Who uses the airport?

Anyone who loves flying can take lessons, keep their plane here, repair a plane, rent a plane, or land here. About 44 airplanes are based here, but any small aircraft may refuel on their way to Florida or spend the day in Great Barrington. Pilots fly in from as far away as Long Island for plane maintenance because our mechanics have such a great reputation and we’re less expensive than large airports.

Turbo props deliver students attending private schools from as far away as Florida. Jimmy Buffet used to fly his own kids up here to attend school. Business people, especially lawyers, fly in for meetings and leave a couple of hours later. We have “courtesy” cars at no charge to get into town and go to restaurants or a meeting. A pilot might hop in a plane and fly to Sky Acres Airport in Millbrook for lunch or down to Block Island for the day. Charters have brought people in for funerals and weddings. On weekends some people fly in for the races at Lime Rock. In the summer we may have two or three chartered planes land every day. It’s really crazy at graduation time.

Who owns the planes based here? How much do they cost?

Contrary to what you might imagine, owners and pilots are just average people, not the 1%. They are retired policemen, mechanics, car salesmen, teachers, or small business owners who love flying. You can buy a small used plane for under $25,000, less than the cost of a pick-up truck. New planes are over $125,000 up to $250,000. If you keep your plane here monthly expenses would be $285 to rent hanger space or $75 for a tie down. Annual inspections depend on the plane and range from $800 to $4,000. Insurance premiums depend on the age of the plane, the pilot and his/her experience.

What planes do you fly?

As long as I get my butt off the ground I’m a happy person. I’ll fly anything from an ultralight to a huge Boeing. I bought my first plane in 1999 and right now I own all Pipers: a Cherokee 140, a Warrior, an Archer II, a Dakota, an Arrow III, and my favorite, the J-3 Cub.

What are the biggest challenges?

Weather is the airport’s biggest challenge, especially when there are cross winds over 20 miles an hour that shut down our runway. There can be seven or eight days when the wind prevents landing or taking off. If the weather is perfect we can have 300 planes a day come in. It takes a day to get the runway plowed if we have a heavy snow.

Then there is regulation by the FAA of the airport and the flight school and our maintenance and inspection services. Despite our safety record, insurance is a huge cost that just keeps going up. Neighbors complain about the noise despite our efforts to limit takeoff times and direct air traffic away from houses. We are a non-conforming use in a R4 residential area so we are limited in what we can do. For example we can’t have our own restaurant – just chips and drinks that I buy myself.

Pilots feel that if you can fly out of Great Barrington you can fly anyplace in the world. We are located in a bowl and there are always predominate east-west cross winds on our runway. Narrow tolerances, a short runway and nasty down drafts add to the challenge.

Great Barrington bills itself as a friendly airport. What makes it friendly?

There are no gates here. Anyone can drive in and have a picnic and watch planes in the sky. Line guys will show kids the inside of the planes and let them sit in the cockpit. Fire departments come here to practice cleaning up toxic spills – with water of course. The National Guard enacts emergency rescue operations. Boy scouts have camp outs in our hangers in the winter and get their aviation badges here. The Rotary uses the airport to fundraise for scholarships. There are cancer runs and pancake breakfasts. We are very supportive of our community and welcoming to all visitors.

How do you make money?

How do you make a million dollars in aviation? Start with five million. That’s an old joke. Our airport stays in business primarily because of flight instruction and our airplane service revenues. We employ 14 people full-time plus flight instructors. We also offer private aerial sightseeing. For $215 an hour three passengers can fly over to the Hudson River or do a scenic tour of the Berkshires. Regional charter flights are also available.

How has Covid affected your business?

We were shut down for three months and survived with a PPP loan. Now that we can operate again the phone has been ringing off the hook. I have had to buy three new planes for teaching to meet demand.

How much does it cost to get a pilot’s license?

It takes 60 to 80 hours of instruction to learn how to fly and get a private pilots license. The national average is 65 hours and our average is 55 to 60 hours. Every hour of instruction here costs $185 for plane, instructor, and gas so it works out to a little over $11,000. Annually ten to twelve people become certified pilots, an additional six or seven become instrument rated, and eight to ten qualify as commercial pilots.

Every year ten to fifteen students from Berkshire School take a credited class in aviation. One of the graduates became the US National Acrobatic Pilot Chamption and another flies for DHL. For them it can be the beginning of a career.

How did you become a pilot?

My father was an Air Force mechanic and his idea of a picnic was going to an airfield on Sunday afternoons to watch airplanes. Stanley Segalla, the “flying farmer,” was related to my mother and started me flying. I became a line boy in 1972 learning how to fuel and park planes. I starting taking lessons and in 1973 got my pilot’s license. Then I flew for Bar Harbor Airline and, many flight hours later, was hired by American Airlines in 1984. For 36 years I flew all over the world for American as a pilot and was an instructor on Boeing Triple 7’s for 22 years.

Pilots are required to retire at age 65 and my last flight was on April 1, 2020. I never wanted to be a baseball player or a lawyer, only a pilot. In my career I have logged in more than 45,000 hours of flight time.

Do you think that aviation is still a great career?

This airport has helped over 600 people have aviation careers. My 19-year-old son Joe, the youngest airport manager in Massachusetts, grew up at this airport and aims to become a commercial airline pilot, which requires logging over 1,500 miles in the air. There is a shortage of pilots as the pilots of my generation retire – 700 to 800 a year. And the military is training fewer pilots because of drones. Despite advanced technology, which can land a plane, you will always need a human up front.

What is most satisfying to you?

Aviation is, and has always been, my world. I love flying and teaching others. The most important thing to me is keeping this small town airport open to the community. This is my life and I’m happiest when other people come to the airport, walk on the field and touch an airplane, or when a new pilot takes his first passenger for a ride. Late in the afternoon I often hop in a plane and fly a little loop around this beautiful countryside. • 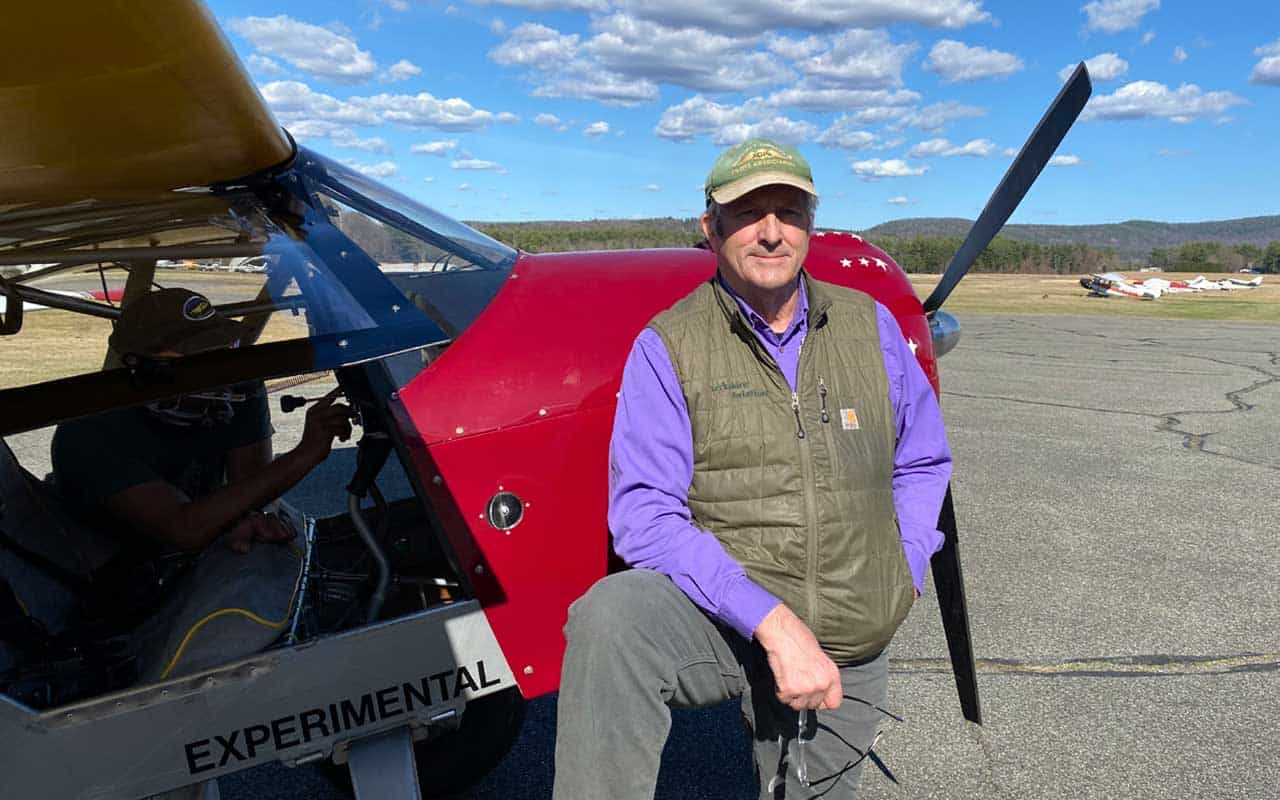