Slightly Off, But Very Good 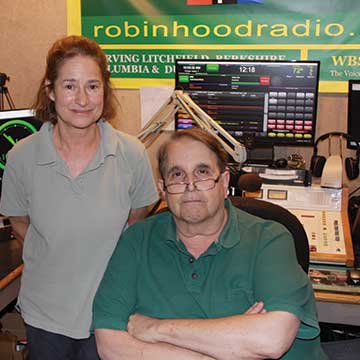 How do we learn each and every day about what is going on in our area as well as the bigger world? Our local newspapers are published only once a week. Internet news sites and TV cover the world, but not our neighborhoods. Daily newspapers cover what is going on in nearby bigger cities like Poughkeepsie or Hartford. That’s why for our annual learning issue we talked to Jill Goodman (JG) and Marshall Miles (MM) about the mission of our local radio station – Robin Hood Radio – the smallest NPR station in the nation.

What is the mission of Robin Hood Radio?

JG: We firmly believe it is critical to furnish local, decent, responsible, coherent information. Really, if a community doesn’t have that, bluntly it makes it rather difficult to function as a community.

How did you select the name Robin Hood and compose the jingle?

MM: At the time the name came to us it seemed like big media was buying up all the small radio stations in the country. The story of Robin Hood – taking from the rich and giving to the poor – seemed very appealing. And it is memorable. Francis Dunnery, a British musician, singer-songwriter, record producer and record label owner who just happened to be visiting, wrote our jingle and words on the spot.

Marshall, you seem like someone who has always been involved with radio. Is that true? How did it happen?

MM: I started in high school with industrial arts educator Morris Rainville broadcasting sports, and then interned at WTOR in Torrington, CT. I started my first professional job at WSBS in Great Barrington, MA, in the summer of 1969. From there, stops in Pittsfield, MA, Kingston, NY, Hyde Park, NY, Augusta ME, and here in Connecticut in both Sharon and Salisbury.WSBS, WBEC, WKNY, WGHQ, WBPM, WHVW, WCDA, WKZE, WHDD.

How did you become involved with radio Jill? Do you do the astrological work?

JG: Long, long ago I started a show on WKZE called The Daily Planets. As for this project, once we had the name, Robin Hood Radio, what was there to do but forge ahead?

Did you have a business plan?

JG: We thought we had a business plan. And then real life intervened. Along with the terrain issues of the area, and we had to improvise. Actually, we should probably frame it as a relic.

What is the broadcast range of Robin Hood Radio?

MM: We’re not a typical radio station that has just one tower. We beam FM signals from Cole Rd in Sharon, another tower in Sheffield by the Berkshire School, one in Dover and another in Annandale-on-Hudson. Our AM tower, which we own, is in Millerton, NY. The Robin Hood Radio Network is WHDD AM1020, FM 97.5, and FM 91.9 Sharon, WLHV FM 88.1 Annandale-on-Hudson, NY, and broadcast on WBSL FM 91.7 in Sheffield, MA.

What is the difference between FM and AM? Robin Hood has both. Is it true that all the iron ore in the hills interferes with transmission?

MM: FM or Frequency Modulation is broadcast by antenna and goes in all directions. In AM, or Amplitude Modulation, the entire tower and metal in the ground bounce the signal off the ionosphere and back down. AM goes over mountains, the FM signal is affected by the height of the towers. It’s the hills not the iron, that can interfere with the FM signal. It’s why we have multiple FM stations.

How did Robin Hood Radio get started? Do you regard it as a public service or a business?

MM: Tri-State Public Communications, Inc. was registered in 2002 as a not-for-profit 501(c) 3 for the local cable access channel CATV-6 and the idea of being an internet radio site. Also, only non-profits can operate non-commercial broadcast stations, and I was aware of a non-commercial frequency that was available in our area.

JG: Once we started robinhoodradio.com, it took until day three, okay maybe a little longer, day five, to know that without an actual radio station, internet radio alone could not be successful.

MM: Then I went searching for bandwidth from the FCC. We had to wait and wait for them to release frequencies. It’s not easy finding available territory. It wasn’t until 2006 that we purchased WKZE AM 1020 as our AM license and our first FM station WHDD-FM began in 2008. It was the last full power FM frequency available. There are none left. There won’t be any more new radio stations locally as you can’t interfere with any other station. And it’s also very expensive to get tower sites. There used to be over 5,000 radio stations, but the big media players like Clear Channel have sucked them up into national networks. Now only the local, independently run stations carry local programming that connects listeners to their communality. Local radio tells you whether it’s a snow day – it tells you what you need to know.

How is programming relayed from a location here on the Sharon Green to our radios?

MM: We receive our NPR programs via the satellite. We send all programming, NPR and our own, via a studio to transmitter link to our tower in Sharon where it is transmitted to the Millerton, Annandale-on-Hudson, and Dover towers. The Massachusetts tower receives programming by internet protocol. We purchase only four NPR programs: Morning Edition, Wait Wait Don’t Tell Me, All Things Considered, and World Café and also BBC News. We pay to be a member of National Public Radio, and pay again to receive programming.

What makes you the smallest NPR affiliated station? How is “smallest” measured?

MM: A station applies to NPR, they come out and inspect your station, set up programming rules and underwriting rules, and we sign a year-to-year contract. Smallest is measured by your city of license population. Sharon has around 2,000 residents, making us the smallest by a wide margin.

JG: We pay rent to the Town of Sharon for this building, and we pay rent at the various tower sites. Insurance, equipment, leases, heat, electricity … it’s a pretty sizeable nut. What makes it complicated is that the federal funding we receive through the Corporation for Public Broadcasting has been going down for rural stations – it’s 20% less than it used to be – while expenses for tower rental, programming etc. continue to go up. Our revenue sources are underwriting, grants, and donations.

So what is the breakdown between underwriters, donors, grants, etc.?

MM: Underwriting from local businesses pays about 40% of our costs, some through our gift certificate program. In exchange for underwriting announcements some businesses supply gift certificates that listeners can buy for 50% off. For example, for $10 you could buy a $20 gift card from stores and restaurants throughout the local Tri-State region. It’s the Robin Hood Country Store (robinhoodradio.com click on Store). It’s a genuine win-win situation.

But that’s what we do. We try to tailor our packages to fit the needs of the business. And I would say that 80% of our current underwriters have been with us from the beginning.

JG: Let’s see. Say underwriting is 35%-40%. Donations from listeners make up 15% to 20%, and grants another 25%. You’ll notice that doesn’t quite add up to 100. So there’s always a shortfall … most people know neither Marshall nor I take salaries. Our station rescue Maine Coon cats, AM and FM, are unpaid, too, but they receive a food and lodging stipend.
So back to your earlier question … it’s a public service, it is a business, and it is very much a labor of love.

Could you explain how the beloved local institution, The Sharon Bargain Barn, fits in with a radio station?

MM: Originally The Bargain Barn was created to help fund Sharon Hospital and became a local institution itself. When the hospital changed ownership it was going to be shut down, Robin Hood Radio assumed responsibility for it to keep it going. It does provide a little extra cash to the station, but that wasn’t the point of doing it.

What are Robin Hood Radio’s most popular shows?

MM: We have over 35 local shows hosted by volunteers. Our most popular listening time, as it is for most radio stations, is the morning three-hour drive time. There is such a depth of local talent. Pat Pagano, our meteorologist, really knows how to relate to listeners. Avid gardeners follow Margaret Roach, formerly of Martha Stewart Living. The Food Maven Arthur Schwartz, former critic and food editor at The New York Daily News, covers the food beat. Plus we have additional programming from local newspapers, magazines, restaurant owners, musicians, etc.

How do you know who’s listening? Any idea of the number of listeners at any one time? Who are your competitors?

MM: It’s such a small market that there’s no official ratings book. We do know that about 40% of listeners are from NY, 40% percent from CT, and 20% from MA. Really there are no local competitors, WKZE is serving Red Hook and the mid-Hudson Valley, and WQQQ rebroadcasts a distant signal from WSHU, and is programmed for southern Connecticut and Long Island.
JG: We get an idea of who is listening from people who call in for contests, people who listen on Facebook Live from 6-7am, and from Public Service Announcements (PSAs) that come in. Just the other day the Dover Fire Department called to say they’d cancelled the parade due to the excessive heat, but that the carnival was still on, would we please announce that. And of course we were happy to.

How do you two divide up the tasks of running a radio station?

JG: Marshall is in charge of all on-air operations and anything technical. I handle the business and organizational side and we both decide what goes on the air in terms of programming. We split responsibilities up as best we can.

What’s the future of radio?

To learn more about Robin Hood Radio, visit their website at www.robinhoodradio.com.