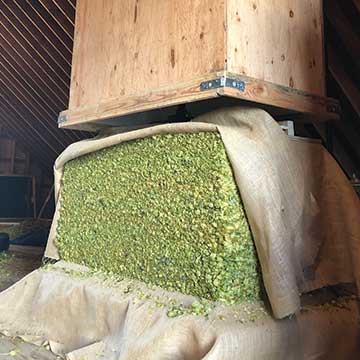 Farming is part of the fabric of the northwest corner of Connecticut, so it’s not surprising that Englishman Dr. James Shepherd and his wife, California-native Katherine (known as “Shrevie”) chose this area to put down roots and fulfill their dream of owning and operating a farm.

After eight years in Botswana and Nigeria with James’s work with the Center for Disease Control in the areas of HIV and TB and Shrevie’s as a grants officer for the US State Department, they moved back to the US with their teen sons to begin another chapter of their lives. He is an infectious disease specialist at Yale University School of Medicine and Shrevie recently completed a graduate degree in international social work at the University of Connecticut.

In October 2014, they bought a defunct dairy farm on Sharon Mountain which covers 175 acres of fields and forest. As James puts it, “We knew this was the place. It had excellent soil and a small footprint of buildings.” With a modest farmhouse and two barns at the front of the property, you can see what he means.

They christened it Smokedown Farm. Shrevie recounts, “When James’s mother and uncle were small they were evacuated from London during the war to a farm in Oxfordshire called Smokedown Farm. They loved living on the farm probably more than they liked living at home and still talk fondly of their days on Smokedown. We thought it was a lovely reminder of England.”

After purchasing the farm they needed to decide what to plant. James’s involvement as a board member of the Connecticut Farmland Trust, with the mission of protecting farmland from development and establishing a local, sustainable food system, led him to consider an unlikely crop – hops. For James, “Hops is that high value, sustainable, and locally appropriate crop. With craft brewers expanding in the state, we felt it was a crop we could raise and sell locally.”

With nine growing acres, Smokedown is the largest hop farm in Connecticut. Each season brings them closer to a financially sustainable yield and propels them along the learning curve, which has been considerable.

James employs his medical research skills to farming and has a somewhat scientific approach to the work. This, complemented by Shrevie’s enthusiastic willingness to get her hands dirty, provides an effective division of labor.

In 2018, they hired farm manager Ally Hughes to complete their team. Previously she was Assistant Winemaker and Vineyard Technician at a winery in central Nebraska, where she was born and bred. “Agriculture is deeply rooted in my Midwest upbringing,” says Ally. “I’m a fourth-generation farmer. My farming interest is specifically in the craft beverage industry. I’m looking forward to helping produce quality hops for the craft brewing industry of New England.”

In winter, the farm looks like its main crop is telephone poles – 667 larch telephone poles to be exact. This is enough to ideally support 1,000 plants per acre. Larch wood is durable and waterproof, as well as rot-resistant in the ground making it the perfect choice for hop farming.

Each of these 18-foot tall posts is buried four feet deep – a fact indelibly burned into the mind of pole-burying James, who is personally acquainted with each one.

Overhead the poles are connected to metal cables that crisscross to form an aerial trellis. They are then lashed to the ground at the end of each 625-foot row. A lover of precision and without the use of a Fitbit, James asserts that if one were to walk up and down every row it would cover five-and-a-half miles.

James describes the need for amending or feeding the soil over the winter and throughout the growing season. “Hops prefer sandy, loamy soil and because of their accelerated growth rate, they require a lot of nutrients, particularly nitrogen. They thrive in a highly irrigated ground that drains well.”

Pests such as the hop aphid and potato leafhopper, as well as downy mildew preclude organic growing. Non-restricted fungicides and Integrated Pest Management (IPM) is practiced at Smokedown Farm. For pests, this means understanding their life cycle and preferences, monitoring their activity and adjusting treatment accordingly, and tolerating harmless bugs.

Shootin’ from the hop

In the early spring, hop shoots grow with reckless abandon from the hop rhizome or crown. These shoots resemble purple mini-asparagus and left unchecked, each will grow into a hop plant.

Four to eight shoots are ideal for optimal growing. Extra shoots will siphon off energy from the plant root. This makes it necessary to “crown” the hop plant by trimming the shoots.

Hop shoots are a delicacy in northern Europe, where the price has earned them the reputation of being the most expensive vegetable in the world. The Shepherds tried to make a go of introducing the northwest corner to the glories of a sauteed hop shoot. Unfortunately, our tastes lag behind those on the continent. Until that changes, instead of feeding people hop shoots, they are composted to feed their future sisters.

A hop farm is “like a vineyard on steroids,” observes James. A native perennial plant, its Latin Linnaean name is humulus lupulus, meaning “wolf of the woods.” Hops are aggressive and rapid growing.

However, it grows not as a vine, but as a bine. What’s the difference? Vines possess a vertical stem that sends out tendrils which attach to a vertical support to brace the stem. Bines stems wrap themselves around the support. Shrevie describes that “to help in catching onto the support, the bine has scratchy hairs that can cause what’s known as ‘hop rash.’” James offers the scientific term for scratchy hop hairs. In case you were wondering, it’s trichome, from the Greek trichoma, meaning – you guessed it – hair.

At the end of April, hop training begins. Shrevie’s description of the process sounds as exhausting as it is. It requires a platform rig attached to the back of a John Deere. Every three feet of each row coir cord, a sisel-esque coconut fiber, is hung from the trellis. The coarseness of the coir gives the hop hair something to grab onto.

Then, the hop plants need to be repeatedly “encouraged” to attach themselves to the coir. The hop plant must be trained clockwise around the cord. This follows the natural growth pattern of the bine. The plant follows the sun from east to west and resets during the night.

In addition, the hop harvesting machinery is calibrated to accommodate coconut coir, and it has become an industry standard.

Hops are extremely photosensitive and are intimately clued into the amount of daylight they’re exposed to. James explains that hops need 15 hours of sunlight to create optimal growing conditions. This occurs above the earth’s 44th parallel, which makes hops a perfect crop for the northern hemisphere.

Prior to the Summer Solstice, as the bine grows up it begins to develop the nodes of sidearms, on which the hop flower will grow. After the Solstice  the hop plant can sense the shortening of the day and will begin to produce pale cone-like flowers, which grow exclusively on female plants. Any male plants will go to seed.

From mid-August through mid-September the hops are harvested. The whole plant, coir and all, is cut to the ground. Shrevie waxes exuberant about this time of the year as if she actually enjoys it. It’s intense, exhausting, and requires many hands getting scratched to make light work.

After harvest, the bines have only a short time to have the hop flower removed and dried in the hop-drying kiln or oast. Ally explains, “The hops are harvested from the field and run through the harvester immediately and put into the oast. This all occurs on the same day and the sooner the better. If the hops are left on the bine they will begin to rot and spoil.”

After drying, the hop flower can be bagged as whole cone or as of last autumn, with the purchase of the proper machinery, put through a pelletizer and bagged for breweries or homebrewers. The whole cone hops are more of a specialty item. Kent Falls Brewery, in Kent, CT, uses whole cone for its popular Bird Post pale ale. Harney & Sons use them for their caffeine-free New England Teamaker Hops.

Although the fields look bleak and barren now, the Smokedown Farm team is looking forward to the 2020 growing season. They are keen to expand hop production and establish themselves as the source of quality hops for the craft and home brewer alike. •

Hop varieties grown at Smokedown Farm include Chinook, Tahoma, Santiam, Teamaker, Centennial, Challenger, and Cascade. These varieties are sold to breweries in the area such as Kinsman Brewing in Milldale, Kent Falls Brewery in Kent, Two Roads Brewing/Area Two Brewing in Stratford, Back East Brewing in Bloomfield, and Little House Brewing in Chester. The list is expanding each season and recently they’ve added online ordering and delivery for the home brewer.

For more information about Smokedown Farm and their hops, visit them online at www.smokedownfarmhops.com or email smokedownfarm@gmail.com.