by the hillsdale historians

Every now and then, we set out to research something, and while we may uncover some interesting facts and anecdotes, there isn’t enough to warrant an entire blog post. So, we chuck what we have found into a folder and stash it, like a jar of old screws and bolts, on a shelf in our digital “garage.” You never know when something might turn out to be useful. This month, we decided to build a blog post out of these “spare parts.” Perhaps they will someday end up in a Hillsdale Trivia Night.

(H. D. Harvey pops up from time to time in our research because of the Harbinger connection. Most recently, we mentioned him in our post about Hillsdale High School.)

Henry Dudley Harvey died in 1928, according to his extensive obituary, which was published on the front page of the Hillsdale Harbinger. That this grandiloquent account of Mr. Harvey’s life was so prominently displayed is not surprising since he was the founder and publisher of the Harbinger in 1887.

Henry was born in Austerlitz in 1851. Harvey Mountain is named for his family. After graduating from Spencertown Academy, he attended Eastman Business College in Poughkeepsie. He moved to New York City and became a clerk at the Hygienic Hotel (and honestly, where else would you want to stay?) before moving to Florence, MA to become a bookkeeper for a large mercantile firm.  In 1879, he returned to the area and opened a jewelry store.  (It’s not clear how he acquired his jewelry repair skills, but that was the bulk of his business.)

The jewelry store and Henry and his wife, Abigal. Abigal (not Abigail) served as the Harbinger’s proof reader for more than 20 years. Just a small fragment of Henry’s effusive obituary.

In 1887, he acquired the assets of the two newspapers serving Hillsdale at the time:  The Hillsdale Harbinger and the Hillsdale Enterprise. He apparently felt that these two papers did not do an adequate job and he resolved to make an improvement. In 1887, the first issue was published. Henry was the first to admit that he knew nothing about the newspaper business, but he hired an editor and typesetter.  Here’s a picture of Henry, age 36, leaning on a printing press he had no idea how to run: 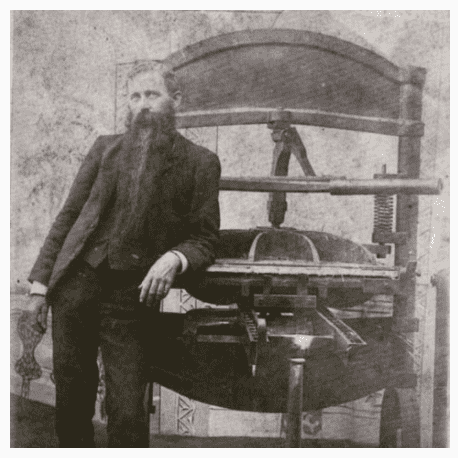 Readers of this blog may recall that in our post about Hillsdale High School, we noted that Henry also had a franchise to sell high-wheel bicycles, sometimes known as penny farthings. Henry rode one himself and was often seen in the far reaches of Hillsdale, Copake, Ancram, Taghanic and Austerlitz, as well as Alford, MA and Egremont, MA. He sought to meet as many people as possible (and sign them up for a $1.50 annual subscription). It was also his way of gathering news for the paper. In the early days, he would often accept apples, potatoes and other commodities as payment, so the paper was not an immediate financial success.

Henry was a bit of a jack-of-all-trades.  To quote his obit, “There was scarcely a phase of human activity to which he could not turn his hand. He had been a carpenter and builder, photographer, jeweler, printer, and plumber. He has left a number of pen and ink drawings and several oil paintings which are prized by his family as showing the diversity of his attainments.”

He died at the age of 77, “having the respect of a community which had benefitted by his living in it.”

May that be said of us all.

(Much of our research starts off by looking at old newspapers like the ones that can be accessed on the Roe Jan Library’s website. This was just an ad we spotted while we were looking for something else.)

It’s always exciting when a new shop or restaurant opens in town but we’ve got a long way to go before we experience the greater Hillsdale business environment as it was not too long ago.  Here’s an ad from the July 29, 1993 Roe Jan Independent announcing Hillsdale Community Day. (Sorry the map isn’t more legible. You can see the full-page ad in situ here.) 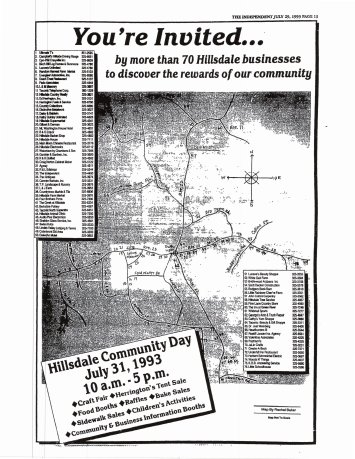 (Andy Morandi’s name pops up from time to time, most recently in our research for the post about the Village Scoop.)

Ambrose “Andy” Morandi was a serial entrepreneur who had extensive real estate holdings in Hillsdale and Valatie, and in Great Barrington and Alford, MA.  Born in Alford in 1911, Andy was working as the manager of the Great Barrington Coffee Shop in 1933, when he enlisted in the Navy.

In the 1950s and 1960s, Andy began acquiring property. In the mid-1970s, Andy built and operated the highly regarded Morandi’s Restaurant and Pub, which subsequently became the Hillsdale outpost of the Four Brothers chain of restaurants.  He then built an extension attached to the restaurant called the Morandi Shopping Center, attracting the Hillsdale Sport Shop, Roe Jan Insurance Agency and The Butternut Tree, which was, according to the Roe Jan Independent, “a specialty shop with a variety of apparel for misses and juniors.” In the early 1980s, Larry Weinrab moved his Step & Style shoe store from Great Barrington to the Morandi center because New York State law allowed him to be open on Sunday; Massachusetts law did not. 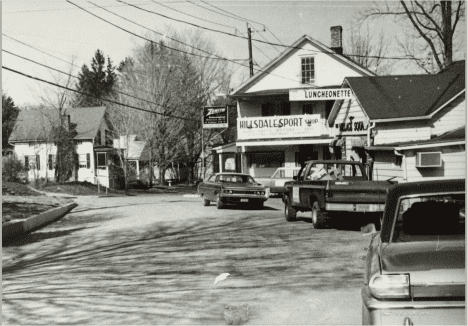 Andy also owned the Hillsdale meat packing plant, housed in what today is the office of Herrington Stone and Masonry, where he processed and sold a variety of aged and smoked meats. One of his best customers was the Hillsdale House — after all, for a while he owned that, too. Other land holdings included all of what became known as Pill Hill. When a friend wanted to buy a parcel of land from Andy, Andy told him that the parcel was already in contract with another buyer.  “But,” said Andy, “I suppose I could just not show up for the closing.” And that’s just what happened, and his friend bought the land.

Not all of Andy’s ambitions came to fruition.  At one point, he announced that he was going to open a drug store in the shopping center. It never happened. Neither did the bank branch or the grocery store.

In 1985, Andy moved to Meriden, NH, to be close to one of his daughters.  There he managed Garfield’s Smokehouse until 1996. in 2000, Andy died at the age of 89 from injuries sustained in a car accident.

And, of course, we all know what became of the former Morandi Shopping Center in 2020. 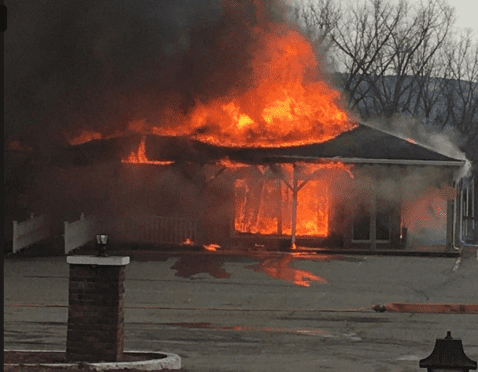 (When we stumbled on these photos, it was the first we’d heard of the 1957 Milk Strike, but there’s nice real estate surprise at the end that we wanted to share.)

There’s no question about it:  Dairying is hard work. Dairy cows need to be milked at least twice a day, 365 days a year. Dairy farmers have always been hard at work in the most frigid winter weather and on the hottest days of summer. And their reward for this toil often was selling their milk to a dairy co-operative for a break-even price or even a loss. Dairy farm failures were regular occurrences.

Milk is produced in two grades: the highest quality milk is Grade A and is sold as drinking milk.  Grade B is used to make other products like butter and cheese. In the 1950s, the dairy co-operatives like the Dairymen’s League Co-Operative Association had the power to set pricing. Farmers who delivered Grade A milk often did not get the stated Grade A price. Instead, they would get a “blended” price, essentially an average of Grades A and B. And because dairy co-operatives were known as monopsonies, the co-op was the only place the farmers could sell their milk.

Not surprisingly, from time to time a group of frustrated farmers would organize a strike by refusing to deliver their milk to the co-op and preventing others from doing so.  In August 1957, a milk strike was declared across a wide swath of the New York “milkshed,” including in Hillsdale. 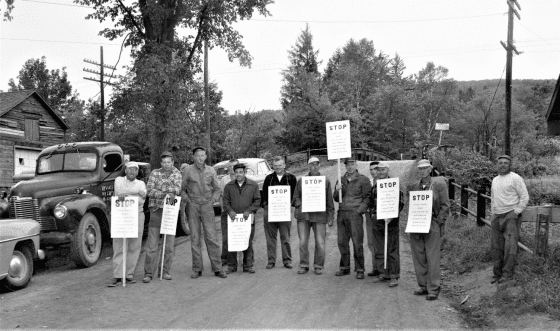 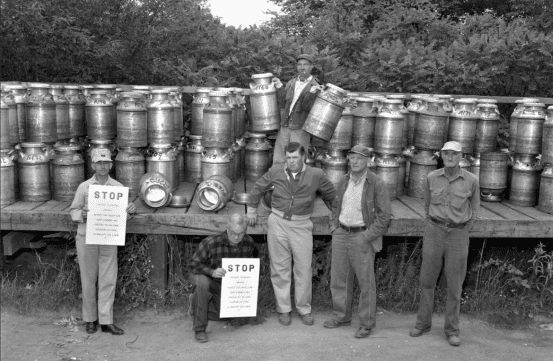 The Dairymen’s League (which was eventually shortened to Dairylea, in case you remember that brand) crushed the strike in one day.

One columnist of the day summed it up succinctly: “[Dairymen] do not favor the strike method. But on the other hand, they face the need of higher prices for their milk if they are to stay in business.” The problem with strikes? “A machine or a production line can be turned off.  A cow cannot. In other words, a dairyman on strike does just as much work but can strike only by dumping his milk into the barnyard.”

The power of these dairy cooperatives has been challenged in court more than once, and the co-ops have paid big bucks to settle class action suits against them by their own members.  After decades of consolidation, the Dairy Farmers of America has emerged as the largest co-op and stands as the poster child for the movement to break up Big Ag. 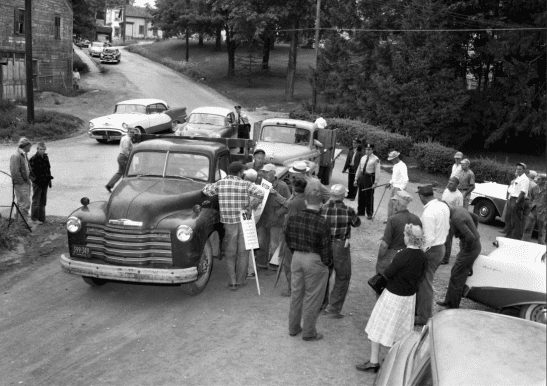 At 2.30 miles in length from Rt.22 to the Massachusetts state line, NY 71 is the shortest two-digit state highway in New York. 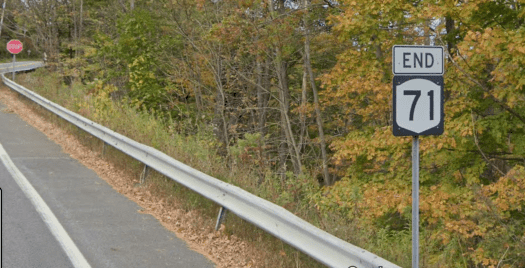 We hope you have enjoyed our tour of our digital garage.