Speaking for the Trees 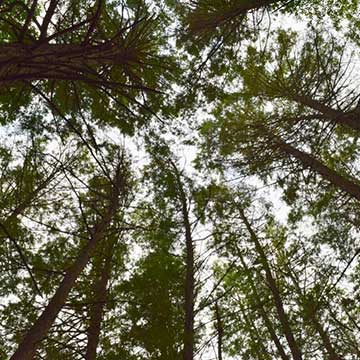 We have a long, and at times, turbulent history with the trees and forests that inhabit our vast landscape. Even before Europeans sailed across the Atlantic in a vain attempt to tame the “pristine wilderness” of the New World, humans were utilizing American forests to help support their way of life. Native Americans used the wild forests that surrounded them in the Northeast to sustain themselves. The concept of fire ecologies first evolved in many forests thanks to Native American communities. As settlers arrived, the vast interior was harvested for trade, land was cleared for settlement and homes were built for growing populations. The arrival of the Industrial Revolution ushered in rapid expansion and subsequently the rate of logging exploded. The American economy, and its appetite for economic growth, facilitated the destruction of large swaths of wild forests. By the Civil War many forests in our area were completely logged out. As sensibilities changed post-war, along with growing concerns over the future of timber supplies, a number influential Americans helped to bring on some of the very first conservation movements.

Gateway to the human condition

Authors and poets like John Burroughs and philosophers like John Muir began to sow the seeds of conservation in the minds of Americans rounding the corner towards an uncertain 20th Century outlook. Much of what we perceive as the early conservation movement is personified by forester Gifford Pinchot and then President Theodore Roosevelt and the creation of the US Forest Service with Pinchot as its head in 1905.

The conservation legacy of Theodore Roosevelt can be found in the 230 million acres of public lands he helped establish during his presidency. Much of that land – 150 millions acres – was set aside as national forests. Roosevelt created the present-day United States Forestry Service (USFS) in 1905, an organization within the Department of Agriculture. An outdoorsman himself, Roosevelt saw the natural wilderness as a gateway to the human condition and thus was an adamant proponent of utilizing the country’s natural wonder, Roosevelt wanted to ensure the sustainability of those resources. For his part Pinchot, a native of Simsbury, CT, became the chief, or forester, of the new Forest Service shortly after the turn of the century at the behest of President Roosevelt. Pinchot worked to restructure and organize the management of the country’s national forests, ultimately increasing their area and size. The goodwill fostered by Transcendentalism would only last a few decades. After the end of the second World War, the rise of the American economy on the international stage once again saw a rapid rise in large-scale logging. This time it was the Forest Service who worked with the timber industry to cut wide-swaths of the nation’s last “virgin forests.” As a result, a new environmental movement sprang to life in the 1970s. For an entire generation of Americans who lived through the war in Vietnam, a growing mistrust in government lead activists and organizations to use legal means to halt logging in forests that had existed for centuries. In the Northwest, the listing of the northern spotted owl under the Endangered Species Act dealt a heavy blow to many logging industries doing business on Forest Service lands. Still, despite its history, our relationship with trees remains one that requires advocacy, especially for those trees that can be sufficiently qualified as ancient.

An exceedingly rare type of forest in our neck of the woods are those called old-growth forests, or simply “old-growth.” Ironically, the term “old-growth” is somewhat new among arborists and ecologists. Old-growth forests are typically categorized by the presence of exceptionally old, typically large-diameter trees that are living, dying, and dead. In our area, the kind of familiar names that could also be considered as old-growth are the 200 year old white pines, 250 year old sugar maples, and 400 year old hemlock trees. Though scientists and experts may diverge on what specifically classifies a forest as “old-growth,” all agree that old-growth forests play essential roles in wildlife habitat, species diversity, hydrological regimes, nutrient cycles, carbon storage, and numerous other ecological processes. According to the Forest Stewards Guild, “They have unique structures and attributes that provide habitat for plant and animal species such as lichen, bats, birds, and mammals that are not found in other forest types. Old-growth forests inspire a sense of awe, offer recreation, and have spiritual values.”

These old forests are rare, and in our area these ancient trees are exceedingly so because of earlier Colonial expansion. However, many of the State Parks in Massachusetts and Connecticut still provide shelter for these ancient giants. The presence of old-growth in the Northeast comes with good and bad news. The issue is especially complex but thankfully scholars are beginning to understand the ecosystems beneath these trees that connect them with different species in supportive relationships. It seems the broad definition of how forest systems work is finally being challenged by experts in order to maintain the existence of old-growth trees, the threats remain varied.

Despite the burgeoning knowledge as well as the waves of challenges, those who support sustaining the existence of old-growth trees are staunch in their efforts to keep them alive. In the Town of Sharon, CT, an effort is underway to preserve the legacy of the elder trees at Housatonic Meadows State Park, a protected wildlife area covering 452 acres along the Housatonic River in the towns of Sharon and Cornwall, CT. In January, Connecticut’s Department of Energy and Environmental Protection (DEEP) pushed forward with plans to cut down centuries-old trees at the park and in response, concerned citizens and public officials raised questions about the decision-making process that has already allowed for some 200 to be felled.

“There are several ways to consider trees,” says Michael Nadeau of Sharon, CT, a Connecticut-Licensed and Certified Arborist for more than forty years and who has been directly involved with trees and landscapes for fifty-five years. “Considering the climate crisis and the alarming decline of bird and insect species and recent scientific breakthroughs in plant science, trees – especially old trees – are considered as essential to the restoration of natural systems.” Mr. Nadeau is part of an ad-hoc group, the Housatonic Meadows Preservation Action (HMPA), consisting of concerned citizens and many environmental professionals, including botanists, arborists, biologists, and forest ecologists who are actively rallying against further tree removal. In January, DEEP cut down some twenty-six mature trees, some well over 100 years old, from the steep riverbank of the Housatonic River. After the trees had been removed an esteemed group of arborists, biologists, and forest ecologists determined the trees were substantially sound and could have been preserved using standard arboricultural practices. The HMPA notified DEEP of their findings and tried to halt the cutting of the trees, yet it persisted.

Last month, Connecticut’s Council on Environmental Quality discussed the state’s process for removing hazardous trees following an HMPA protest held in the vicinity of the cutting in January. “As the tree cutting began, several American bald eagles flew from the vicinity of the work area to circle several times before disbursing,” recalls Mr. Nadeau. “We then tried to work with an environmental attorney who would plead for a stop to the tree killing until DEEP considered the possible damage to American bald eagle habitat. This effort was too little, too late. The tree crew kept cutting and there was no intervention. We then staged a protest rally on Thursday, January 13, where an exuberant crowd of concerned citizens gathered with signs and chants to protest DEEP’s lack of consideration for the trees and wildlife that depend on them. There were at least five DEEP Conservation Police officers on duty, prohibiting entry beyond a fenced area and to presumably protect the tree crew from us. After hearing the eagle injunction had failed, we broke up the rally.”

After a meeting with officials and the public on January 26, Council on Environmental Quality chairman Peter Hearn developed a list of draft recommendations for DEEP to consider. Political leaders got involved as well after State Senator Craig Miner (R-Litchfield) and State Republican Stephen Harding (R-Brookfield), ranking members of the legislature’s Environment Committee, issued a statement calling for additional documents from DEEP to be released in connection with its ongoing widespread hazard tree removal at Housatonic Meadows State Park as well as the Housatonic Meadows Campground.

A lesson in activism

Though DEEP is not required by law to notify any agency before it begins a project, leaders and members of the HMPA say it should be, and that the procedures the agency follows should be changed to include public notice. According to a report from the Connecticut-based Register Citizen, “During a January 6 hearing organized by DEEP, officials were given testimony by landscape and arbor experts who questioned how the agency decides what constitutes a hazardous tree. They also discussed the impact of removing trees along the riverbank, which can cause unwanted erosion and possible contamination. Much of that testimony was reiterated at the January 26 meeting.”

For their part, Mr. Nadeau and the other volunteer members of the HMPA understand they cannot stop the cutting of every old-growth tree, but wish instead to fundamentally change the way these types of decisions are made as well as what it means for any government agency to protect the environment. “Our long-term goal is to fundamentally change the ways DEEP ‘protects’ our environment,” he says. “For instance, DEEP does not employ even one professional hazard tree assessment arborist, who should have had jurisdiction to make these kinds of decisions, not a Parks Department employee with no arboricultural or forestry credentials; better communication and collaboration between departments that have valid input in such decisions; and an overall revision of the state liability laws that necessitate the removal of allegedly hazardous trees.”

When it comes to the future of old-growth trees both locally and afar, knowledge is to become the most important tool in preservation. Until that time, it is the hope of the HMPA and other volunteer organizations that government organizations will reconsider tree removal activities until, as Mr. Nadeau says, “they meet with politicians and well-intentioned, educated and concerned citizens to work out a plausible alternative to the removal of older but still thriving trees and steer future practices toward preservation instead of destruction of our heritage trees that provide myriad ecosystem services for humankind as well as the rest of nature.” 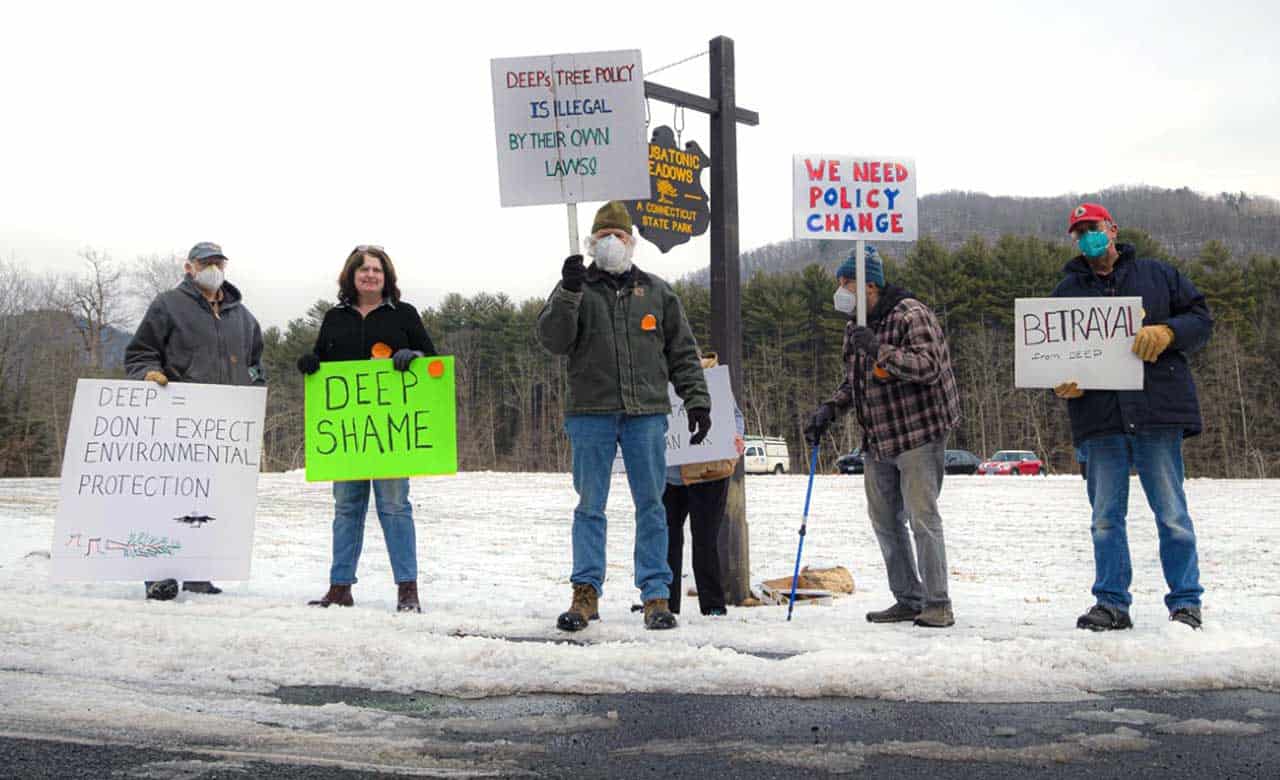