The month of January has meant something different for society over the past two years. Traditionally, the New Year celebration includes genial notions of health, happiness and career ambitions for many. Recently, geniality has been replaced by a greater sense of desperate hope. Thus far, 2022 has been no different as widespread anxieties continue to rise over the spread of the Omicron variant across the nation. At the beginning of the pandemic, public education was impacted immediately as many area schools pivoted to online learning for the health and safety of students and parents. Shock waves from a radically different form of learning implemented in record time reverberated for children, families and educators for the next two years. Now, in the midst of another COVID surge, another challenge has arisen for school administrators that has tested the mettle of public schools throughout the area.

“The way I would describe it is that society has shifted and jobs have opened in many places,” says Ian Strever, principal of Housatonic Valley Regional High School in Canaan CT, who has noticed a concerning number of staff departures since the fall. “While we have a loyal and relatively tenured staff, some of those openings began to send ripple effects through our building.” A report from the National Education Association (NEA) said that in the nearby Town of Danbury, approximately one third of district staff have tested positive, are quarantining, or caring for family members who are ill. As a result, those staff left are filling in for a variety of vacancies—specialties be damned. The same report from the NEA says that “nationally, the ratio of hires to job openings in the education sector has reached new lows as the 2021-22 school year started and currently stands at 0.57 hires for every open position.” In 2020, the transition to virtual learning was born out of necessity. Today, as the drought of educators continues, Zoom education persists despite emotional opposition. “We just don’t have as many young graduates, especially in highly specialized fields,” says Strever. “Additionally, there is an emotional component to what teachers are experiencing that is highly complicated and multifaceted. We are not making widgets; we are raising young people, and that has always been an incredibly important and meaningful vocation that is inextricably interwoven between the emotions of the teacher and the student. That relationship is being redefined, and it is not yet clear what it will or should look like, but it is and will be the topic of books for years to come.” In Dutchess County, NY, shortages have bled out of the classroom and into transportation departments, forcing several schools to close and go fully remote once again. According to a January report from the Poughkeepsie Journal, the issue has “triggered closures in Arlington, Millbrook, Dover and Pawling this month.” 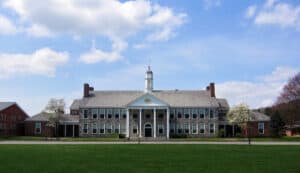 As perplexing as the reasons are for the widespread dearth of educators and staff for public schools in the area, the path to refilling classrooms is just as complicated. Some point to the hasty transition to virtual learning formats as a possible reason for frustration among educators, but at least one administrator disagrees, “I can only speak for my school, but the cause is much more complicated and inextricable from the entire state of the world,” says Mr.Strever. “I don’t think I can directly point to virtual learning as a cause of someone’s departure, and it was not until this fall that we really began to see some departures, which was when we were operating more traditionally than we had since the pandemic began.” Recently, President Biden enacted legislation to distribute approximately 10 million free COVID testing kits to encourage schools to stay open for in-person instruction. Federal funds have also been made available for schools in need of maintenance repair or to fill ancillary positions. “We have used federal funds to subsidize a social worker position as well as some support staff positions such as a tutor for students who are English learners,” says Strever. “The Elementary and Secondary School Emergency Relief Fund (ESSER) have also been spent to bring our HVAC and air quality to a higher standard in light of what we know about Covid-19, and we have had a relatively uninterrupted period of instruction at Housatonic this fall as a result of those measures and the continued vigilance of our community about mitigation strategies.”

On the surface, it appears both parents and educators agree that empirically, in-person instruction is best for students. Still, the NEA report states, “88 percent, believe superintendents should have the flexibility to move to remote instruction for a short period of time, without having to make up the days, to ensure safety in the classroom,” the report goes on to say, “A survey conducted by Connecticut’s Board of Education (BOE) Union Coalition found that…found that more than half (55%) of paraprofessionals said they have been unable to fully implement their assigned students’ IEP and 504 plans due to staff shortages.”

From an outsider’s perspective, it may be easy to feel that any obstacle in public education tends to thread back to teachers’ unions. According to Strever however, the current staffing shortage goes far beyond any traditional concept of squabbles between union representatives and administrators. “There is always a union aspect to consider, especially in Connecticut, but I don’t think unions are being unreasonable in their demands,” he says. “There is a process for negotiating their position with local school boards that includes all stakeholders, and when you look at the flexibility and support that are provided in many other industries, I think the requests of unions are generally reasonable. One thing to keep in mind is the state’s role in staffing and certification.” No doubt the path to becoming a public school teacher in both Connecticut and New York can be a daunting one for those looking to make a career transition. In Connecticut for example, in addition to possessing the necessary degree, candidates must successfully complete a state-approved educator program of general academic and professional education at a regionally accredited college or university. Connecticut Teacher Certification Programs typically include an educational theory and classroom skills seminar as well as a fieldwork component of student teaching in the given discipline.

The process can feel a bit overwhelming for prospective teachers whose ambitions might be stifled by the time required for specialized coursework. “While we all appreciate the need to hire qualified, certified faculty, that is a daunting task in highly specialized areas such as Physics, World Language teachers, and Applied Education,” reiterates Strever. “There are many rules about highly certified teachers that require our faculty to have advanced degrees and to maintain certification in their subject area. This is not the case in many businesses, or even in most private schools.”The pressing need for educators who meet the requirements necessitates a continuously open line of communication between school administrators and union representatives. In the meantime, unions in other states are negotiating pay increases for teaching assistants in order to fill in the gaps. Though the temporary boost in hourly wages is certainly a positive, it ultimately shines a light on the long-held belief that full-time educators need more financial support in order to perform their critical roles at the highest levels. “We share the belief with our unions that teachers are role models, mentors, and I would even go so far as to call them caretakers for democracy,” says Strever. “We have free public education to ensure an educated, thoughtful citizenry, and that is not possible without highly skilled teachers. All that said, we have worked closely with unions to adapt to a new set of needs in a very short period of time, and we are all trying to create a workable vision for the future of teaching and learning.”

Environmental Challenges and a New Way of Thinking

As with most sectors nationwide, the field of education has not been immune to the movement that has become known as the Great Resignation. Across the country, many young professionals are reconsidering what a working life means for them. “Philosophically, (it) is a more complicated question, and I think that depends on the individual,” Stever points out. “My sense of it is that there is an existential crisis going on for many of us.” Remote work opportunities are on the rise and the tech revolution has many folks preferring to work from home. In our area especially, an even more pressing issue has increased anxieties among educators and support staff alike. “Our geographic isolation is an obstacle for us,” says Strever. “As is the high cost of housing in this area. One teacher who had been commuting an hour every day recently left us for an opportunity closer to home, and we have very few younger teachers living in the Region.”

Though the youth movement seems to be straying farther away from the field of education, the endearing sense of commitment among the educators left clinging to the hopes of their students’ future is still very much alive. The sight of superintendents hopping behind the wheel of a bus and lunch support staff determined to offer healthy options to students despite interruptions in area supply chains is as poetic as it is disconcerting. As Ian sums up, “To paraphrase Mary Oliver, What do we want to do with this one, precious life?”, he says. “For me, I love the buzz of teenagers in the hallways and the electricity of discovery that happens at that time in their lives when young people encounter formative ideas and develop their own worldviews and philosophies. It makes my own work meaningful, which helps me climb to the highest levels of Maslow’s Hierarchy of Need. I can’t speak for all teachers, but it is that sense of mission and purpose that continue to make my work meaningful and that I believe are necessary to a meaningful life. I’ve really leached into my philosophy on life, here, but this moment in history seems to be calling for all of us to take stock of what we are doing and why we are doing it, and people are wrestling with that question because they have so many doors open to them right now.”

Statistical data for this article sourced from www.nea.org