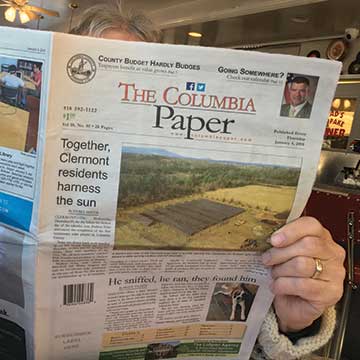 Why are we interviewing and, in effect, promoting what some might view as a direct “competitor” of ours? Local newspapers and magazines are after all fighting for much of the same readership and advertising dollars. But what some might not realize is that quite a few of our local publications work together in different capacities (i.e. reprinting stories, sharing camera-ready ads for our advertisers). I have known Parry since the inception of his Columbia Paper, and he and his staff have done a wonderful job of bringing everyone the news, weekly to boot! In a time when a lot of publications are folding and people say that “print is dead,” I thought it pertinent to share with you how and why print can thrive with the right folks behind it and with the right stories. And so Christine was able to catch up with Parry and share how he brings us the news. – Thorunn Kristjansdottir

Why in the depths of the recession in 2009 did you start a weekly newspaper? What was wrong with you?
It’s not a choice most business people would make. It’s not a way to accumulate a fortune; it’s the satisfaction of providing people with information about where they live. I’ve never calculated the hours I spend working but it’s a six-day a week labor of love. It’s so satisfying when people come up to you and say, “I love your newspaper.”
I was editor of the weekly Woodstock Times when I was offered the job as editor of The Independent in Columbia County in 2000. A few months after I arrived here the local owners sold The Independent to the Journal Register Company chain. I remained editor until February 2009, when the Journal Register, on the verge of declaring bankruptcy, closed The Independent. The writing had been on the wall for quite a while so I wasn’t surprised. They never really understood weekly newspapers. Within ten days, working with former staffers we had a Columbia Paper website up and running with local news and in three months the first edition of the printed newspaper was on the stands. We’re still here nearly ten years later and our paper is growing. It’s a real tribute to the group of people who have worked on this project.

Did you write a business plan for this new venture?

From my days as an entrepreneur writing a business plan was easy. I can’t say it was very forward thinking to start a paper in a community where the paper had just been closed. I laugh and say one of the options was success, but not necessarily a financial success. I had to raise a small amount of money to produce the first issues and a whole lot of people were willing to contribute to make it happen. It was more an article of faith. I also sought the advice of many people who offered information and moral support and never sought recognition. I remain committed to doing local news for this community, Columbia County, and the only way to do it is through display advertising in a newspaper.

Have you ever considered acquiring other newspapers?

There was one chance to acquire another publication but there was no synergy between the two papers. There has to be an affinity between communities served to make sense of combining efforts.

You’re both editor and publisher. Is that difficult?

It certainly has been a learning curve. The toughest problem is finding the right people to do ad sales. I had no expertise in direct selling and I’m still learning. And it takes time to build public awareness about your publication.

What stories has The Columbia Paper published that have made a difference?

I know that Diane Valden’s continuing coverage of Copake’s serial scofflaw and polluter Salvatore Cascino have made a huge difference in the public knowing about environmental pollution. What do you do when someone flouts the law and manages to elude being held accountable? Cascino has spent 18 years violating federal, state, and town laws for illegal dumping and now he’s in jail for contempt of court. Covering big issues that face communities connects us to the rest of the world. It’s not lucrative, reporters can’t survive on what we can pay, but the satisfaction is getting the news out.

How many subscribers do you have? Who are they? Where do they live?

Our readership has grown every year and now we’re at about 2,400, which isn’t bad considering there are only 62,000 people in the whole county. We do have some snowbirds but almost everyone is a Columbia County resident. We are fortunate because our population skews older and these people are used to reading newspapers. They know what a newspaper is and are loyal readers. Our circulation is also helped by the fact that Columbia County has terrible internet and cell phone service, which creates an opportunity for us. In addition there is no county-wide competition from other papers and even the radio market is fragmented.

There’s that old adage: we know they can spend a dollar a week and can read. They are also interested in Columbia County and believe they can trust the news we print. About 40% of our sales are at retail outlets and 60% are delivered to post offices, which put the papers in people’s boxes or delivers them to homes.

Where’s the best place to sell newspapers? How much does a store get for every paper they sell?

The best place to sell a newspaper is where other newspapers are sold and where people are making other purchases. We distribute to about 75 locations in the county. Retailers get 15 cents for every copy sold, but their larger benefit is that newspapers provide another reason to come into their store and maybe newspaper customers will also buy an ice cream cone, a hot dog, or a quart of milk.

We have about 10,000 users a month, but there’s seldom anything online that hasn’t already appeared in the paper. There’s no pay wall and users are willing to wait for repurposed news. We dole it out in little ladlefuls to keep the site fresh. The money in publishing is still in print newspapers. We’ve never considered the option of doing a digital-only version because all the money goes to Google and Facebook.

Who are your employees? How many do you have? Where is the paper printed?

We have no employees; all 20 committed people who put the paper together are independent contractors, including my daughter Emilia who’s the deputy publisher. It’s the only way to do a newspaper in a gig economy. Many of them worked at the Journal Register. Everyone gets paid, but not very much, and no one gets benefits. It’s a labor of love.
The Berkshire Eagle produces our paper in their Pittsfield, MA, printing plant. It used to take them just 15 minutes to print The Columbia Paper, but as we’ve grown and added color it’s taking a little longer.

What is your schedule for the week?

Our deadline for all content is Wednesday afternoon. The paper is printed late in the day on Wednesday and arrives here in Ghent, NY, on Thursday morning. We put the labels on for all of our subscribers and send the rest out to our retail distribution points in the county – gas stations, grocery stores, etc. Thursday afternoon we discuss what will be in the next week’s paper and spend Friday, Saturday, and Sunday working on stories and the weekly calendar. All ads are in by Monday at the end of the day, and reporters start sending me stories. We provide a page chart to the printer late on Monday with the size of the paper. On Tuesday the page layout is finalized and on Wednesday the actual content is complete. This week was really exciting with the arrest of DACA protesters outside our Congressman John Faso’s office. It happened on Monday and we had to get it into the paper. We can’t publish old news. It’s a little mysterious how it all comes together – it’s like a performance.

Do you ever make mistakes?

We try not to but we’re human. You have to take responsibility for your errors and need to let people know what the record should actually show. No one derives benefit from misinformation.

How much space do ads take up in an issue?

Balancing content with ads is a constant juggling game. Every week I have to make a decision about this. If we could get to 50% ads and still have space for more news, I’d be delighted.

What traits make a great reporter?

Good reporters like to tell real stories based on facts. You must organize information that is compelling to read without distorting it. Telling a story fairly and honestly is a true skill. There’s no better way to learn than to start at a local community paper and learn how to write, and how to meet deadlines. It’s motivation and discipline that you find nowhere else.

What’s your advice about a career in journalism?

Journalism is a calling that fulfills you. My advice is to know something and know something about story telling. Reporting teaches you how to process information that is fair, accurate, and relevant. You must learn the practical tools for communicating. There is still no better way to get started than as a local reporter.
When the Journal Register owned The Independent, everyone was on a salary and could live modestly. Now you need an additional job, but the experience is no less valuable. The beneficiaries are the readers who find out what’s going on.

Your media career started at Woodstock when you filmed the crowds with portable video equipment, cutting edge technology at the time. How does that experience relate to publishing a local newspaper now?
Then the challenge was finding outlets for your content. In 1969 the three networks had a strangle hold on all broadcasting media. Today it’s the opposite. There’s a super abundance of outlets for news from cable to YouTube. The conditions are clearly different, but the issue of finding your audience remains the same.

What papers do you readeveryday?

I read The New York Times every day and the Times Union out of Albany. I also look at news online so I can know what all sides are saying. You know newspapers are the most subversive thing out there. •

To learn more about Parry Teasdale and The Columbia Paper, visit their website at www.columbiapaper.com.