The Artist with a Knife 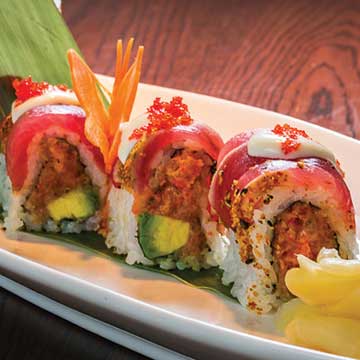 Some artists use elegant sable brushes to apply their paints. Some artists use high carbon chisels to carefully form stone into sculpture. “Leon” Li uses a razor-sharp, forged two steel, single ground “yanagi-ba” knife to deftly cut fresh tuna and yellowtail in creating the elegant sushi at The Woodland in Lakeville, CT.

Without question, creating sushi and sashimi is an art. It is only when the chef has invested the time and keen focus to learn from a master chef exactly how to judge the fish before them – smell, color, and firmness are just part of that process – that the next step, the skills, can be added.

Like being an apprentice in any art form – wood working, ceramics, painting, sculpture – the road to becoming a true sushi chef requires patience, dedication, and imagination. The proof of sushi artistry, of course, is set before the customer, chop sticks at the ready, to be savored and enjoyed. Consumable art.

“Leon,” as he calls himself out of deference to his American customers, began his training at no less an iconic restaurant as Shabu-Shabu in Manhattan. It was there that he watched and learned from the Japanese Master who was resident at the restaurant, and began to use the elegant long yanagi-ba knives that slice with surgical precision.

“I learned the steps. First was watching,” Leon recalls with a knowing smile. “Then came doing … being able to copy the master’s strokes and placement.”

It was not until he was on his own, however, that Leon ventured into the area that is the great differentiator for sushi chefs. “Creating.” It is as much a statement as a challenge that Leon has met with grace and the skill that builds a loyal following.

“It is only when you have mastered sushi creating that you are ready for Omakase.” Leon utters the word with great reverence. Chef’s Omakase is the tribute paid by a diner to the chef. It means “do whatever you like,” and gives the chef complete license to create using tastes, textures, colors, shapes, and the interplay of all three. For Leon, when a repeat diner requests Chef’s Omakase, it is both a challenge and a great compliment.

Most artists have masters whose work inspires and motivates their own. Sculptors celebrate Rodin, Calder, and Brancusi. Painters revel in the works of Van Gogh, Picasso, and Rothko.

For Leon, inspiration comes from Chef Jiro Ono, the legendary sushi chef whose ten-seat sushi restaurant in Tokyo has been awarded the coveted Michelin Three Star designation. It was at Jiro’s restaurant that Japanese Prime Minister Shinzo Abe hosted President Barack Obama in 2014. The result? President Obama dubbed the meal the best sushi he had ever had. This coming from a man who grew up in Hawaii and dined frequently on sushi.

To watch Leon exhibit his “Omakase” is to be caught up in the choreography that moves from the all important sushi rice cooker to the tempura fryer to the cold chest filled with beautifully cut fresh ginger, chives, mango, avocado, all of which are brought together on the narrow counter that serves as his easel. Set in front of his work area is the cold cabinet displaying the fresh fish available to him.

Knives made for artistry

Leon’s use of his knives – the “deba bocho” he uses to filet fish and remove the bones, the “gyuto” for larger cutting, and the “yanagi-ba” used for the delicate cutting of sashimi and sushi components – create a visual blur that magically reveal perfectly sectioned avocado, mango, tuna, shrimp, yellowtail, and the rest of the palette of fresh food available to the artist. Each knife costs upwards of $700 and the chef treats them with immense care and respect.

For this day’s Omakase, Leon begins by carefully slicing a shelled, de-veined shrimp, placing it in flour and readying his tempura batter. While the fryer rises to temperature, Leon removes a beautiful piece of tuna and deftly slices pieces. One stroke. The knife drawn toward the chef. The pieces of tuna smooth on both sides.

Fryer ready, Leon pours in a measure of tempura batter, letting it quickly cook up to small, golden nuggets. The shrimp is bathed in the batter and set in the hot oil. With a flat, perforated ladle, the batter is added to the shrimp until, golden brown, it is removed and placed on a bed of the special sushi rice that is at the base of this meal.

Tightly rolled in a soy sheet, the rice and tuna with delicate slices of avocado are cut into sections and carefully placed on the plate.
Next is a portion of the tuna, diced with mango and combined with a fresh mango “sauce” made of blended mango, orange juice, honey, and a touch of vinegar. Artfully placed on top of the inverted pieces of the shrimp roll, one half of this creation is set.

The remaining tuna sashimi is carefully positioned on the plate and the display punctuated with a dollop of wasabi, a carved lemon and a sprig of fresh ginger.

Apparently, however, we’re not done. In a flurry, Leon breaks free of the kitchen and steps into the rear garden, where he carefully cuts some lily fronds and places them in a small glass vase.

Vase set amid the various creations, there are two accents that are needed to make this truly Leon’s Omakase. Reaching into the cold case, he removes two delicately carved radishes that he has carved into birds. Set into the piece and topped off with a flower, Chef Leon’s Omakase is complete (see image here to the right).

A life dedicated to art

Not only is Leon Li’s dedication to his art well presented by each order of sushi and sashimi that is carried from The Woodland’s kitchen and placed in front of an expectant customer, his travel schedule is, as well. Leon’s family, his wife and three children, live in New York. From Tuesday through Saturday, Leon stays in Sharon and displays his estimable talent at the restaurant. Weekends, he is home with his family.

Asked whether any of his children might follow in their father’s footsteps and become a chef, Leon smiles gently, knowingly. “My daughter, she’s eight years old, she’s already starting to make sushi.”

And the tradition continues. Watch. Do. Taste. Create. •

To reach Chef Leon Li, visit him online at thewoodlandrestaurant.com or call the restaurant directly at (860) 435-0578.
Are you an artist and interested in being featured in Main Street Magazine? Send a brief bio, artist’s statement, and a link to your work to info@mainstreetmag.com.