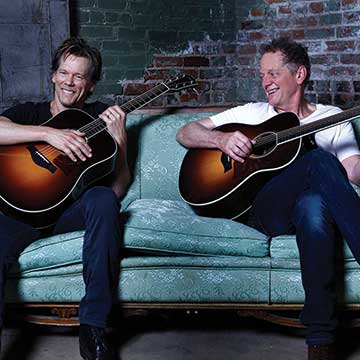 Kevin and Michael Bacon’s band, The Bacon Brothers, first made it onto my radar when I stumbled across a Youtube video from 2009. Though they had already been performing as a band for a dozen years by the date of the video, I had never crossed paths with their music, but this time I was intrigued. The video showed them sitting in a semi-circle with Daryl Hall (Hall and Oates) and several other musicians and they were all playing a favorite song of mine, Paul Weller’s Above the Clouds.

I had known that Kevin Bacon had a house in Sharon, CT, and had heard that Daryl Hall also lived nearby, but what I was soon to learn was that this was not a stand-alone video, but Session 64 of a seven-year project appropriately entitled Live from Daryl’s House.

Unbeknownst to most, each month luminaries such as Toots and the Maytals, Shelby Lynn, Todd Rundgren, Smoky Robinson, and Ceelo Green had been making the trek to Hall’s Millerton, NY, residence and sound studio to make music. The project eventually made its way to television and ultimately evolved into Hall’s eponymously named club in Pawling, Daryl’s House.

When I recently spoke with Kevin and older brother Michael, I asked them how their participation had come to pass, kind of assuming that Hall was being neighborly. To my surprise, according to Kevin the connection had more to do with past proximity than present real estate in that, while the Bacon brothers were growing up in Philadelphia in the 60s and 70s and Michael was beginning to play gigs at area clubs, Hall and Oates were the local favorites. That duo, the “blue-eyed” faces of Philadelphia Soul, would soon eclipse the City of Brotherly Love and achieve national prominence with the release of their second album Abandoned Luncheonette. Once Michael and Kevin formed The Bacon Brothers in 1995, Hall and Oates quickly reached out and invited them to be the opening act for a show at Nassau Coliseum.

Kevin recollects their Daryl’s House reunion with Hall with a chuckle, remembering, “Rehearse is not a word that had much to do with what went on. The way it worked was, you would bring two of your songs, Daryl would bring two of his and you would do two covers. Daryl suggested Above the Clouds. It wasn’t a song either of us were familiar with, right Mike? But it had that Philly soul sound and Daryl was from Philly and so are we, so it was perfect. We arrived around ten, worked on the songs all day, did the videos around six and then we had a chili cook-off. It was a blast.”

In the videos of this session, which also show Michael and Kevin jamming on guitars to When the Morning Comes and the Rolling Stones’ It’s All Over Now, with Hall, a drummer and a keyboard player, two things are striking. One is the fun they are all having, their affect emphasizing the “play” in “playing” music. And two, each Bacon Brother has chops!

For Michael Bacon, this should not surprise. He is, after all, a career musician with scads of distinguished accomplishments. Early in his life he toiled for a time as a staff songwriter for a publishing company in Nashville, TN, and songs he has written have been covered by Jerry Lee Lewis, Carlene Carter (daughter of June Carter Cash and her first husband) and Peter Yarrow of Peter, Paul and Mary. More recently he has scored countless TV and film projects and has won several Emmys himself while films he has worked on have won Academy Awards and Golden Globes. In 2016 he also wrote and premiered the four-movement Concerto for Violoncello and Orchestra.
Kevin, in contrast, has had more to prove. As one reviewer penned in The New Yorker, “Hollywood hangs like an albatross around the neck of any movie star turned musician.” And it is the rare actor who has been taken seriously for contributions in the music world – Steve Martin and his banjo come to mind as an example of one who has. But, as the New Yorker review continues, The Bacon Brothers “shake(s) off the burden of fame with sharply executed rock that has a blue-collar, rootsy edge,” and observing them on stage it is hard not to concur.

Kevin contrasts his two “jobs” by saying that while the work in acting is to assume the persona of someone else – hair, makeup, wardrobe, accents, movement – for The Bacon Brothers he just shows up as himself, wearing whatever he put on in the morning. Instead of losing himself in a role, he loses himself in the moment. To watch him finger-picking his way through a melody is to see just another rock and roller honing his craft.

As Michael describes it, The Bacon Brothers band was “almost inevitable” from their childhood days. The precedent for sibling bands was out there – Everly Brothers, Isley Brothers, Allman Brothers, The Kinks, The Carpenters, and of course the Osmonds and Jackson Five. Kids everywhere were inspired to form bands and the Bacons were no different. Their family band was called The Quandary Quintet. “It was the kind of family we were,” Michael recalls. “Acting, playing music, painting … we did all that stuff. Our band used to practice in the basement … me, my sister, and her boyfriend. I have a clear picture in my mind of Kevin sitting at the top of the stairs watching and listening.”

Soon Michael, nine years Kevin’s senior, would fly the coop for New York to study music at Lehman College, where he has coincidently now joined the faculty teaching scoring for film. A few years later when he turned 17, Kevin would make the same journey, sleeping on his sister’s couch and waiting tables while breaking into acting. With his early breakout roles in Diner (1982) and of course Footloose (1984), Kevin’s acting career took off but in 1995, the same year Apollo 13 was released, The Bacon Brothers became a formal entity.

There was no particular catalyst for this event – Michael accounts for it as “just timing and KB was ready for some reason.” Kevin’s version is more succinct – “#sixdegrees” is his explanation for how it all aligned. Whatever the circumstances, once the joint venture in music became a priority, a torrent of songs by each was unleashed.

Twenty-two years and eight albums later, the brothers are still coming together to make music in what each considers a meaningful pursuit. According to Michael, what gives it meaning are the live shows, “doing what we do best, putting on the best possible show for the fans that pay a lot of money to be there and reaching them and connecting with them.” Kevin provides a complementary anecdote, an email message he recently received. A film producer he was communicating with mentioned out of the blue that he kept going back to listen to one of Kevin’s songs She is the Heart, which was included on their album Can’t Complain (2001). Kevin adds, “It is not a new song and I don’t play piano and it is a song for piano that we don’t even perform. It felt great though to hear it is still connecting with someone!”

The songs in fact range widely. Michael describes the band as “not having a sound,” a reference to their eclecticism, a phenomenon that led to the title of their first album Forosoco (folk, rock, soul, country). In addition to the guitars, keyboards, and drums that comprise a typical rock band, on stage will also be found a lineup of instruments including accordions, horns, mandolins, and bongos that allows them to move among genres.

Both Michael and Kevin write for the band and whoever authors the song sings lead and the other backup. As they play different instruments – Michael plays cello and guitar and Kevin plays guitar, percussion, and harmonica – their songs orient in different directions. It is tempting to ascribe a more cerebral approach to the older brother, who once wrote a song about his son leaving the family womb to become a professional rock-climber, and draw a contrast with the younger brother’s Hookers and Blow, Boys in Bars, and Bus, his love song for their tour vehicle, but in actuality there is a lot of crossover. The preponderance of tunes are guitar-driven with a roots-rock feel that harkens back to bands of the 70s like The Eagles, America, and CSNY, particularly in the vocal harmonies evident in their best work such as When You Decide You’ve Stayed Too Long. The brothers do come together to discuss business and logistical matters for the band but they move apart to create.

For Michael, who like Kevin considers New York City home, creativity requires peace and quiet and he finds his in a house in rural Pennsylvania that was passed down from their parents. For Kevin, Sharon serves a similar purpose. While Kevin’s wife, actress Kyra Sedgwick, has family roots in the area (her ancestors hailed from Stockbridge, MA, and Cornwall, CT, and a great-uncle from the 1700s lived on the Green in Sharon), that was just coincidental to Kevin’s ending up a local resident. Having first visited a friend in 1983 who had rented a place in Kent, he recalls, “I just fell in love with the area and after going around with a real estate agent on a lark, I bought my house.” Later married in Sharon, Kevin cherishes his time in the country and says as if on cue for this article, “I love Millerton!!! I love the Moviehouse!!!”

He may soon grow to miss it, though. With a four-month tour due to start in eight days, the brothers will be on the road all summer. Still deep in “woodshedding” prior to their departure for the first show in Birmingham, Kevin and Michael Bacon are nevertheless about to release two singles, one written by each. Kevin’s Broken Glass will be accompanied by a video he directed that Michael says is terrific, while Michael’s Two Rivers, takes a metaphorical approach to how “two separate entities flow together in relationships.” Fans can expect to hear the creative arrangements, intricate harmonies and virtuoso instrumentals they have come to expect on both familiar and recent original songs with a few covers thrown in.

There will be one new element in the shows, however, that is sure to please audiences. The brothers recently came across an old video from the 90s that shows them performing the honky-tonky Boys in Bars. For this tour, where venues permit, the video will be projected behind and beside them as present-day Kevin and Michael play along and lip-synch with their younger selves.

“Do you compete with them to see who plays better?” I ask.“No,” says Kevin, laughing.“That is never a winning proposition. But the video does seem to tie it all together!” •

Area tour dates include August 22 and 23 at City Winery in New York and August 27 at Ridgefield Playhouse in Ridgefield, CT.