The Brief Craze For Octagon Houses

Nineteenth century America was a jumble of architectural styles from stately Federal homes and Greek Revival temples to Gothic cottages, Italianate villas, and rambling Victorian Queen Anne houses. The briefest and most curious style was the American fascination for eight-sided octagon structures found in public buildings, barns, and houses. Like geodesic domes in the twentieth century, the octagon craze was short-lived, but wherever an octagon building has survived it attracts our puzzled attention.

A home for all

Octagon structures can be found throughout history like the still-standing Tower of the Winds in Athens, the Baptistry of San Giovanni in Florence built in 1059, or the majestic Jabalieh in Iran. All of them were primarily public, religious structures. While Thomas Jefferson, a self-taught architect, designed and built Poplar Forest, the first octagonal house in the United States, in the foothills of the Blue Ridge Mountains, it was the publication of The Octagon House: A Home for All in 1848 and again in 1853 that ignited the octagon house craze and introduced the idea to the general public.

The octagonal house promoted by phrenologist and lifestyle guru Orson W. Fowler of Fishkill, NY, sought to “bring comfortable dwellings within the reach of the poorer classes.” This new form of affordable housing promised to be “several hundred percent cheaper than any other.” The author proposed building these eight-sided structures with walls of lime, gravel and stone for reasons of economy, insulation, ventilation, and environmental protection. Fowler, who took credit for both ideas, seems unaware of either the historical precedent for the octagonal shape or the Roman use of concrete.

Fowler proclaimed that “wood is objectionable” because “the whole of the earth’s surface is or will ultimately be required for raising food for man” and further that wood decays and burns. The octagonal shape itself promised, like a circle, to enclose more space for its surface than rectilinear buildings and combine “utility and beauty.”

Fowler proposed entering the house through the high basement of these two story dwellings where the kitchen and laundry were located as well as rooms for milk, storage, and “garden sauce” – whatever that is. The book postulates novel arithmetic formulas proving the economy of octagon houses with recommendations for gravel wall formulations, triangular closets and dumbwaiters, rainwater cisterns, and wash-water funneled to the outhouse to be applied in liquid form to gardens. He wrote that even the poorest laborer could afford to build an octagon house by frugal living and eating only one pound of wheat and some apples every day to save enough money for construction.

Fowler’s book might seem like the ravings of a mad man but its premise actually anticipates twentieth century ideas of form following function, simplicity, light-filled rooms, affordable housing, and sustainable building. Fowler himself believed that a sphere was conducive to mental wellbeing. Others found religious reasons for the efficacy octagon houses. During the evangelical revival fervor sweeping across the nation at the time, some claimed that if you lived in an octagon house you would be able to see Christ from any direction when the Second Coming arrived or that the devil couldn’t hide in corners. There are also apocryphal medical justifications cited like warding off rheumatism, while the builder of octagonal chicken coops claimed that hens preferred to lay eggs in corners and an octagon coop provided eight ideal spots. 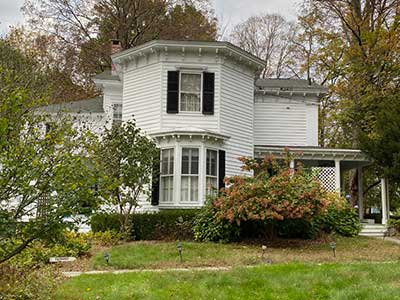 An octagon building near you

Architectural historians estimate that as the result of Fowler’s book about 3,000 octagonal structures were built in the mid-1800s, most of them in New York, Massachusetts, and the Midwest. These houses were largely built in the North between the economic panics of 1857 and 1873 during a time of rapid technological innovation, industrial growth, and talk of social reform, vegetarianism, and mid-century utopian movements. The people who built them must have regarded themselves as forward-thinking and modern. Their homes reflected their principles and, although meant to be economical, most of the octagon houses built were for the affluent.

Today it is estimated that there are less than two hundred octagon houses still standing in New York State, three of which are in Columbia County and another six in Dutchess County including the Red Hook library. Out of 33 built in Connecticut, less than 13 remain. A complete listing of these structures can be found on https://www.octagon.bobanna.com along with newspaper clippings pertaining to each.

These octagon houses could be yours

Over the last year I have watched the renovation of a jewel box octagon house at 193 County Route 7A in Copake, NY. The much in-need of repair vacant house on a small hamlet lot was sold in early 2020 for $45,000 and is now listed by Copake Lake Realty at $625,000, carefully restored and modernized more than 150 years after it was built in 1866 (see photo previous page).

A more recent octagon house at 280 Route 63 in Falls Village, CT, reminds us that even today octagon houses, often sold as kits, are still being built. This cantilevered home on the Hollenbeck River has 900 square feet and was built in 1975 when octagon houses enjoyed another burst of popularity. It is currently listed for sale at $395,000 by John Harney.

Christine Bates, a real estate agent in New York and Connecticut with William Pitt Sotheby’s, has written about all things real estate since the magazine’s first issue. She studied 19th century American art and architecture with Professor David Huntington in graduate school at the University of Michigan. Huntington led the campaign to save painter Frederick Church’s Hudson home, Olana, from destruction. 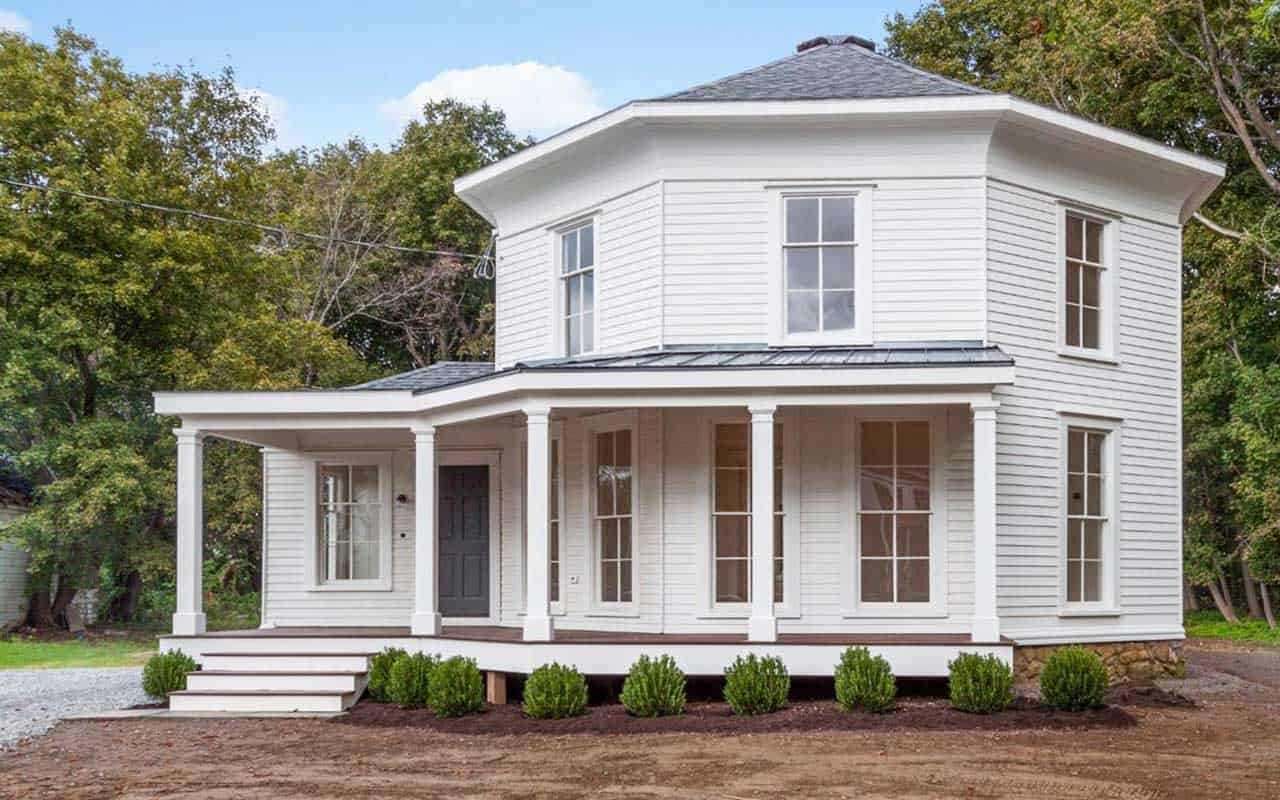