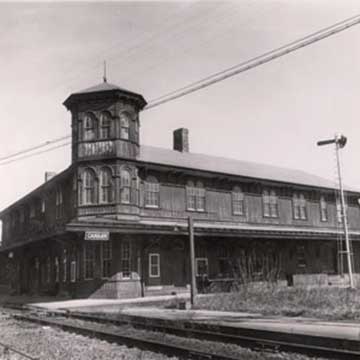 Imagine the turn the 20th century. Passengers are lined upon a platform, awaiting the arrival of their train to take them to places far and wide, or perhaps just a jaunt up the line into the Berkshires or west into New York State. That was the scene that took place pretty much every day at historic Canaan Union Depot in Canaan, CT.

Well, we all know dramatic changes occurred in rail travel during the past 100 years; the passenger trains eventually stopped running to the Canaan Depot (which is actually in North Canaan), as they did to countless other stations around the country. Still, the architecturally significant and beautiful Canaan Depot remained, more a symbol of a bygone era than a functional building until it was renovated for commercial and retail space. Then in 2001, arsonists struck the Victorian-style structure, destroying almost half of the building before fire fighters from several towns halted the blaze and saved much of the building.

The Connecticut Railroad Historical Association purchased what was left of the building in 2003, and the organization began to restore it. Part of the building’s shell and the tower were restored, but work then stalled for more than a decade due to lengthy negotiations to obtain grant money and other issues. The project finally picked up steam in 2014 and is nearing completion now, which should take place sometime in late spring. A grand open house is planned for sometime in June.

In the glory years of rail travel, the building housed two railroad operations as well as a large restaurant. The station was added to the National Register of Historic Places in 1972. The restored Depot’s exterior features interesting architecture, and the work has brought the Depot back as close as possible to its original design and appearance.

Better known as the oldest operating Union Station in the United States, the historic Depot was born in the heyday of the development of railroads in New England, according to the website, www.canaanunionstation.com.

A little bit of Depot history

In 1872 the Housatonic Railroad and Connecticut Western Railroad constructed the building at the junction in North Canaan. The Housatonic ran generally north to south, following its namesake river through the hills and valleys of western Connecticut and Massachusetts. The “Western” later became the Central New England, and eventually, both railroads fell under the dominance of the New York, New Haven, and Hartford.

The “Western” ran from Hartford, west to Poughkeepsie and the high level bridge across the Hudson River. This link created an all rail route north of New York City, and connected the coal fields of Pennsylvania to the factories of New England. Coal could flow northeast, while manufactured goods from the mills and forges of New England moved west and south.

The Canaan Depot was designed by the chief engineer of the railroad, but it’s the wooden carpentry that makes the building exceptional. G.H. Bundy, a cabinet maker and builder of coffins, of Lakeville is credited with the craftsmanship.

The website says the building featured exterior walls of board and batten siding, and two long wings are at right angles to each other at the diamond. A distinctive three-story tower (topped by a locomotive weathervane) allowed railroad telegraph operators a clear view down the right-of-way. Each wing was 90 feet in length and was occupied by the respective railroad companies noted above.

Graceful rounded arch windows were used throughout, and neat wooden brackets supported the roof and track side canopies. Curved-back benches once occupied the platforms for patrons who were changing trains.

On the second floor was a large room that functioned as the station restaurant. It had a 20-foot long semicircular counter in place. In the days before railroad dining cars were commonplace, the Canaan depot lunch room satisfied many a hungry rail patron, claims the website.

Since service was discontinued

In 1971, passenger service was discontinued. Freight service would remain only until 1974, and the station was closed. The building was saved from demolition by a former Amtrak executive who purchased it and converted it to a retail center, which included a popular railroad-themed restaurant in the Central New England wing of the building. In 1980, the state “rail banked” the Housatonic track, and since 1983 a short line by the same name has been operating on the upgraded track, which is seeing increasing car loadings. The Depot was also home to a retail shop and office space before the 2001 fire.

The Depot, which was having its finishing exterior touches applied in early April, is a stunning, but subtle yellow that blends interestingly with green trim.
“We tried to replicate the original station as close as we could,” said President of the Canaan Union Station Association Douglas Humes, a longtime First Selectman of North Canaan. The Association spearheaded the project and continues its fundraising and informational efforts. “The station sits right in the center of town and it was felt that we just had to save the building for the town’s future. It took a lot of time, effort, and money (over three million dollars total) to bring it back to its original luster, but it was well worth it. There were times early on when we thought we might lose it forever. But once we purchased it and restored the exterior of the building we remained committed to finishing the project, although it did take some time and a two million dollar grant.”

A number of governmental officials, including former U.S. Congresswoman Nancy Johnson, and former Governor Jodi Rell, as well as state senators and representatives, town officials, business owners, various organizations, and common citizens lent their support to the project through the years.

An anchor of the restored Depot will be the Great Falls Brewing Company, which will occupy a significant portion of the building. There will be meeting and office space and a 1,000-square-foot railroad museum, the latter likely to open sometime in June or earlier. A number of photographs and railroad artifacts have been gathered for display in the museum, which will be located in one floor of the building’s tower. Above the museum will be a conference room that officials hope can be rented out for various purposes.

Great Falls Brewery owner, Alan Tripler, believes there will be a synergy between the various occupants and purposes of the restored Depot.

“People can come to the museum and then to the brew pub to enjoy a beer and relax. I’m envisioning 200 people coming into the brewery and pub on a mid-summer day. We will have the bar with taps, tables where people can sit and also a deck where they can enjoy the outside.”

Great Falls Brewery at the Depot

Tripler, a member of the teaching staff at Endicott College, began home brewing in 1993 and has been doing it “on and off” for 24 years. He views launching Great Falls (named after Great Falls in Canaan, where he and his wife, Margaret Banker, were married) Brewing Company as turning a page in his life.

Tripler lived and worked in Millbrook at an ecological research think tank (Institute of Ecosystem Studies) then moved to Pocatello, ID, to attend grad school (he received a PhD in biology from Idaho State University) until 2001. He now teaches in the Hotchkiss School (Lakeville, CT) “Portals” program, working with second- and third-year students on advanced field biology techniques.

Tripler, who is a partner in the brewery with several other “founders,” is the managing member of the group. The plan is to brew beer in large vats at the Depot and sell it to customers in a cafe-like setting.

First Selectman Charles Perotti, who was North Canaan Fire Chief during the 2001 blaze and who led efforts to contain the fire, said the restored Depot will be a centerpiece for the commercial hub of North Canaan.

“We are thrilled to have it back up and running. It was an important part of downtown before the fire and we hope the same will be true when it reopens. I can remember the morning after the fire a woman stopped by the scene with her husband. They were in the area looking at the foliage and said they came to the Depot and restaurant every year. She had tears in her eyes. It took a long time and a lot of work by a lot of people, but we are ready to reopen and we couldn’t be happier.”

With the Canaan Union Depot officially open once again there will only be tears of joy flowing at the open house.