The Down and Dirty

Many thanks to all of those who have shared their experience with dirt roads for this article including real estate agents, people who live on dirt roads, highway superintendents, town supervisors, first selectmen, and scientists. As usual, what I thought might be a clear conclusion about the impact of a dirt roads on real estate values, turned out to be more complex and interesting.

There were paved roads 4,000 years ago when stone-cutting tools were invented. As early impressive example is the 31-mile road built by the Minoans, composed of mortared sandstone blocks covered by flagstones. During the medieval period while Roman roads deteriorated in Europe, streets in Bagdad were paved with tar by the 8th Century. Fast forward to the United States between the 1870s and the 1920s, The Good Roads Movement for improved roads was led by bicyclists promoting paved roads between rural communities. With cars, economic prosperity, and federal and state funding only a few rural dirt roads were left behind.

We have a LOT of public dirt roads

Our rural region has many public “unimproved roads.” These are not the responsibility of state or county government, but of town highway departments in Massachusetts, Connecticut, and New York. A spot check revealed enormous town by town differences in miles of public dirt roads. The Town of North East, NY, has 34.23 miles of road but only 3.2 are gravel, similar to Canaan, CT, with close to 5 miles of dirt. But Amenia, NY, has 11 miles of dirt road, Ancram, NY, has 14, Salisbury, CT, has 16.2 miles, and the Town of Washington in NY has a whopping 30 miles of dirt road to maintain and plow. In 19 communities in Western Massachusetts 33% of all roads are unpaved.

Mud season with repeated thawing and freezing is the worst time of year for every highway department and each highway superintendent knows exactly where the trouble spots are and what’s the most problematic road. There is not much available public funding for paving dirt roads and the up-front expense of engineering and paving dirt roads versus the annual cost of maintenance is a difficult calculation.

Maintaining the safety of dirt roads is a year-round task, but as Henry W. Todd, First Selectman of Canaan, observed “dirt roads go with our rural character, and they do cut down on traffic. Look, it’s a lot easier to take care of paved roads, but we take good care of our dirt roads. Most of them are lightly traveled and some can’t be improved because of drainage and wetlands issues. Some road surfaces can’t tolerate paving and we don’t want salt from a paved road leeching into the reservoir.” Paved roads develop potholes, but most dirt roads need grading in the spring and fall every year. Dirt roads that are narrow, steep, and wet are the biggest challenge.

Kevin Smith, director of the Highway Department in the Town of Washington, CT, has succeeded in paving a few short dangerous roads in the 28 miles of town dirt roads. Last year despite considerable “push back,” the department paved approximately .5 miles of “scenic” designated Gunn Hill Road at a cost of approximately $175,000. “It’s very steep and every storm it washed out. We had many informational meetings with the community and most of the people opposed to paving did not live on the section of road to be paved. It was really a safety issue.”

Paving Dark Entry is the next project on Smith’s list with 50% of residents and 50% opposed. The cost, estimated at $200,000 to pave a mile, is still under consideration. While second homeowners seem to be nostalgic about dirt roads, Smith suggested, “talk to the UPS and Fed Ex drivers and ask them.”

What do home buyers think about dirt roads?

Real estate agents drive everywhere and have firsthand experience with showing hard-to-get-to houses. John Harney of William Pitt Sotheby’s commented: “It depends. A dirt road can cut both ways. We had one customer who demanded to have the car turned around as we were driving down a dirt road to see a property with the comment that, in his mind, ‘Country has paved roads. Wilderness has dirt roads.’”

The other side is a buyer who purposely looks for property on a dirt road, because it is indicative of more open country lands, the road changes with the seasons – mud season in the spring, dusty in the summer, beautiful in the fall and, perhaps, offers more solitude.”

Another experienced realtor with Sotheby’s, Mimi Harson, rides her motorcycle up Mount Riga Road. “I grew up on a dirt road. It was wonderful. I have never had a client ask about a dirt road or reject a property because it’s on a dirt road.” She also mentioned that motorcycles have GPS specifically for dirt roads, “to avoid them or ride on them.”

An experienced, off-road broker with Elyse Harney, Juliet Moore, drives a Jeep. “I am particularly fond of dirt roads, especially two: Race Track Road in Lakeville, and West Woods Road #1 in Sharon. Because I love to drive, really drive, and can get anywhere in my Jeep, a muddy washboard is just an adventure. I would say that my clients usually have pretty strong opinions on the matter: they love the paved roads that don’t cover their cars with mud, or they would only want to be on a dirt road that forces everyone to slow down. The biggest question new residents ask is, if a dirt road can be, and will be, plowed. Indeed, it will! Our dedicated road crews, know we count on them to get to work, and deliver our children to school, and for emergency vehicles to be able to reach our homes.  They are out throughout the night sometimes going over a driveway more than once in a heavy storm.”

Juliet continued to explain, “I do have to remind buyers who will not be using their homes in the winter, that they still need to have their driveways plowed – for two reasons: so that their properties do not appear vacant and so that emergency vehicles can reach the structures, if necessary. I have represented several listings on West Woods Road #1 and I always tell the customers coming to see the homes: add ten minutes to what you think it will take you, slow down, hug the right, and enjoy the beautiful country drive.”

Alan O’Doherty from Sotheby’s Kent office summed up the feelings of most brokers I spoke to: “The huge benefit of a dirt road is that you don’t get many people passing by. There is wonderful privacy and seclusion, which ultimately is what many people crave when they envision their country home. On the subject of buyers, I’m representing several NYC dwellers at the moment who are actively avoiding any listings that are close to a normal/standard road. They get the feeling that there is a sense of prestige and exclusivity with a property on a scenic, dirt road.”

A scientist with a dirty secret

“The dirty secret is that unpaved roads have a poor ecological record. While they aren’t covered in asphalt or concrete, they are very compacted. Rainwater runs off of unpaved roads much as it does paved roads,” according to Dr. David Strayer, a freshwater ecologist at Millbrook’s Cary Institute of Ecosystems Studies. “But unlike paved roads, dirt roads are very prone to erosion. This is a problem because sediment can pollute waterways. Ecologist have linked unpaved roads and poorly managed construction sites to the degradation of streams. Animals like trout and stream insects – a lot of them require rocks or gravel or other clean surfaces to live on and when the fine sediments come off the roads, they can smother the habitats for these animals. Sedimentation from unpaved roads can also raise streambeds, leaving us prone to flooding. During dry periods, unpaved roads also generate a lot of dust, altering roadside vegetation and causing breathing problems. And the chemicals used to keep dust down can have additional ecological or health effects.”

A relative newcomer to Sharon’s Bowne Road, Michelle Alfandari, the co-founder of Homegrown National Park, responded enthusiastically to the question about how she felt about dirt roads: “I LOVE living on a dirt road with all its messiness. I NEVER want it paved EVER. We would never have moved here if we weren’t assured that it would never be paved. We love the quiet of the road even though mud season can be a challenge for both driving and keeping one’s car and oneself free of mud and dust. There are downsides, but the upsides all outweigh them.”

A long-time Millbrook on Killearn Road resident was just as positive: “I treasure the fact that I have lived on a scenic dirt road for 50 years. We’re privileged. I don’t want our road to be suburbanized.”

The battle over Killearn Road

Since 2017, a battle has been waging in the Town of Washington, NY (aka Millbrook) over unpaved Killearn Road. Residents opposing paving have stated that Killearn is designated as a scenic road, deserves protection under the comprehensive plan, adds value to real estate, stops speeding and discourages popularity among motorcyclists. In March of 2021, a new petition was submitted to the town board signed by over 29 residents requesting the town to consider a long-term solution to “create a safe, drivable, and durable road.” They argue that the number of homes on the road have increased from 26 to 50 homes over the years causing an increase in traffic and more wear and tear on the road. A letter to the town supervisor Gary Ciferri, cites safety concerns. “This morning, on the way to dropping my son off at school, my car, going 5 to 10 miles an hour, slid and almost collided with a horse trailer coming in the opposite direction.”

The signatories claim that they have received calls informing them that their children could not be picked up because of road conditions. They also list inability of cars without 4-wheel drive and delivery vehicles to navigate the road, and ruined tires. Main Street’s inquiries on the status of their petition to the town supervisor and town clerk have not been returned. Citing the legal concept of “coming to the nuisance,” one dirt road proponent said, “My neighbors bought their house on a dirt road, and I don’t understand why they didn’t buy a house on a paved road.”

So what can we say about dirt roads and real estate values? Similar to many other special features of a home, like an indoor swimming pool, horse barns or closeness to a busy paved road, dirt roads can be a plus or a minus to potential home buyers. Perhaps scenic dirt roads are more attractive to weekend, part-time buyers than to year-round residents or UPS drivers. One high-end realtor called it, “reverse snobbery.” Dirt roads require more attention from highway crews and are becoming more vulnerable with the extremes of climate change. Dirt roads, although seemingly natural, may actually be worse ecologically. The reality-check is that very little funding is available for most budget stretched highway departments to pave dirt roads. Never buy on a dirt road with the promise it will someday be paved.

Australians know about driving on unpaved roads – the continent has 280,000 miles of them. Outback motorists offer experienced advice on driving on dirt roads: slow down and drive smoothly, slow down even more for oncoming traffic, check your tire pressures – on the low side is better for long stretches of dirt road, look ahead and read the road, avoid dust from other vehicles, dodge rocks – tires hate rocks, avoid dusk, dawn and night driving when animals are most active. At least we don’t have to worry about being attacked by a wounded emu or kangaroo. 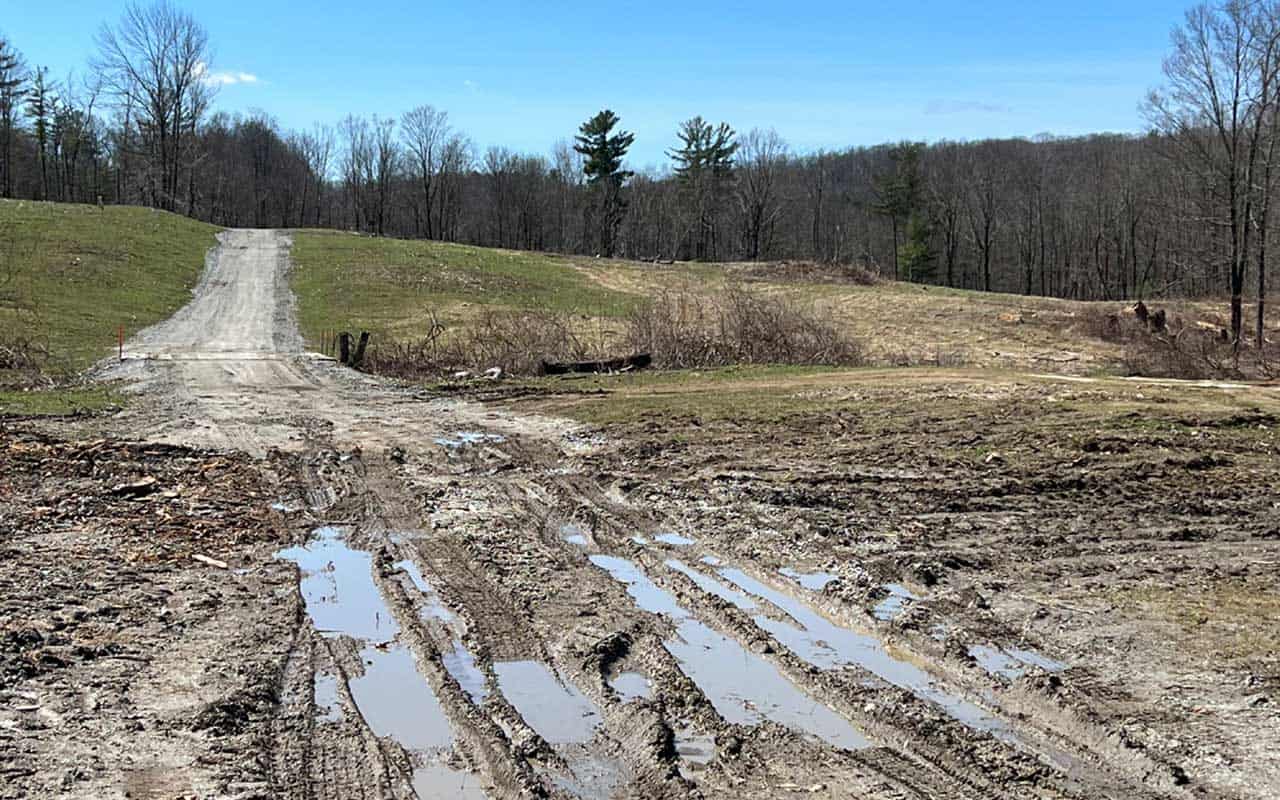