The Fifteen Gifts of Christmas

Just when the year seemed to be ending, as T.S. Eliot observed “… not with a bang, but a whimper,” Holiday Memories appears in the courtyard of Berkshire Theatre Group’s (BTG) Unicorn Theatre in Stockbridge, MA, and the entire game changes.

For fifteen performances scattered across Fridays, Saturdays and Sundays through December 20th, a group of overwhelmingly talented actors will bring Truman Capote’s remembrances of a childhood growing up dirt poor in Alabama during the Depression to a stage placed within the Unicorn Theatre courtyard. Utilizing two walls of the barn-like structure that held the original Unicorn (prior to the construction of the current theatre) director Eric Hill has elegantly moved his striking cast into becoming the characters in Russell Vandenbroucke’s adaptation of two Capote stories. Thankfully, Hill has brought us along for the transformative experience. 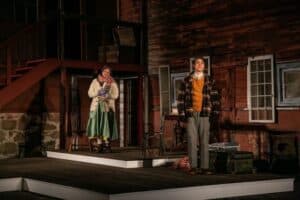 David Adkins, a mature Truman, is mesmerizing in his portrayal of the character, his command of the flowing narrative and his capacity to sustain the slight hint of Alabama dialect that endured through Capote’s life. Jennifer Scapetis-Tycer talent as a dialect coach has been on display at prior Berkshire Theatre Company productions including the 2019 season gem, “Outside Mullingar” which was directed by Karen Allen. She has done an exceptional job working with this cast. Through gently flowing monologues that move the story of friendship across generations through Thanksgiving and Christmas in 1930s rural America, Adkins hypnotizes the audience.

Central to the story are the young Capote, identified as “Buddy,” played by Tim Jones. A program note that evokes at least a smile is the fact that Jones has a Master’s Degree in Aerospace Engineering. It’s always good to have a fall-back. His dramatic talent is so great, however, that the likelihood of his having to step into the corporate world seems slim, at best. He appeared as Judas in the ground-breaking production of Godspell, this summer’s triumphant production at BTG’s Colonial Theatre outdoor performance space in Pittsfield, MA. Jones not only captures the elemental qualities of a young man grappling with his identity and struggling to break free, but one who has found, in a quirky maiden aunt, a singular friend and companion.

And, that generous, long-suffering co-conspirator of an aunt is beautifully presented Corinna May. A veteran of many BTG productions as well as a credible list of Shakespeare & Company productions, she has a lengthy list of film and television credits, all of which are testament to her depth of range as an actor. 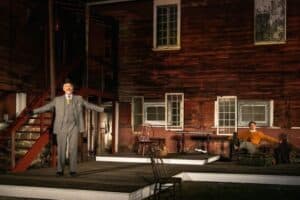 Daniel Garrity appears in several roles in the production, moving from character to character with an ease that is seamless. Isadora Wolfe also appears as several characters to round out the cast, but is also credited with being the Movement Director for the production. That is no small feat, as social distancing on stage makes it difficult to hold hands, to tussle in a schoolyard fight, to count pennies spread out on a bedspread or carry home a freshly cut Christmas tree.

All in all, Holiday Memories is a pure delight. With small audience size (25 at the moment), stage and audience set outdoors without cover (dress warmly and bring cushions to soften the benches), attendance will be limited … but oh, so desired. Weather will play a role in deciding the day and time to see “Holiday Memories,” but by turning attendance into an adventure will make the magic even greater. This is why we love live theatre. This is truly great theatre at a time when we “need a little Christmas” no matter what our faith or spiritual persuasion.

There will be no carol singing assemblies this season. Bach’s Christmas Oratorio, Handel’s “Messiah,” productions of “The Christmas Carol” will have to be enjoyed online, the family gathered around the computer screen, squinting to watch Tiny Tim hobble through the snow or Ebenezer Scrooge spiral into anguish as he is shown his ignominious future by the Ghost of Christmas Future. Don’t let the holidays slip into long, grey evenings of sadness. Take your place on a socially distanced bench at Berkshire Theatre Group’s “Holiday Memories” and savor the holiday spirit anew.

To acquire tickets, call the Berkshire Theatre Group box office number at (413) 997-4444 or visit their website at berkshiretheatregroup.org 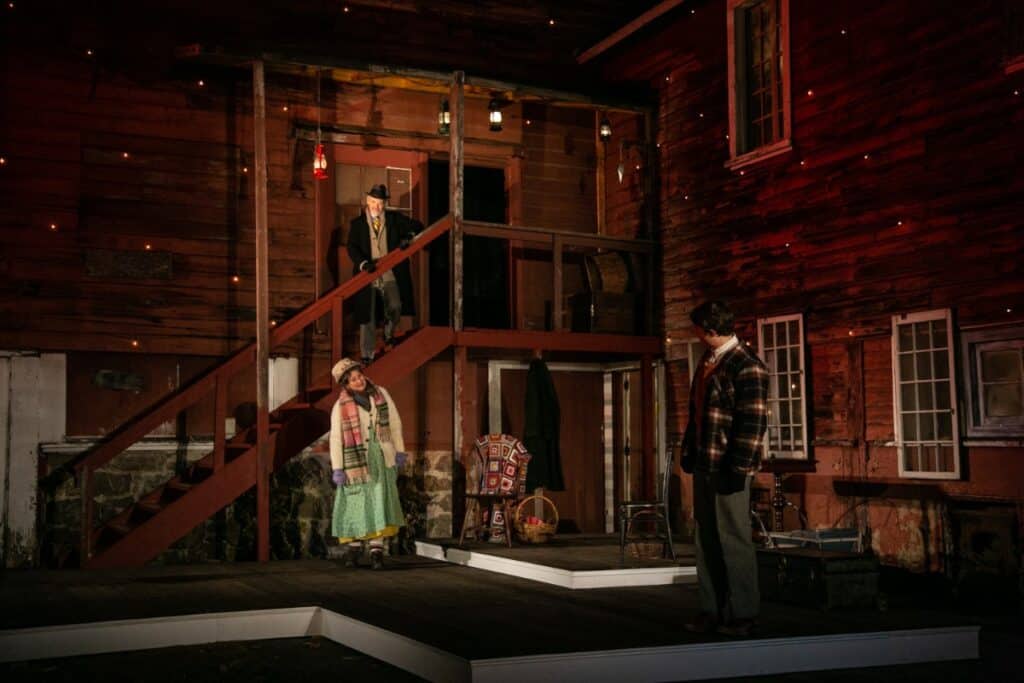