The Heart of Cycling Returns

The notion of combining tradition with passion is baked into the spirit of the Hudson Valley. The open air, along with the history of our area have made it one of the most attractive destinations in the state. When folks come, they cannot help but linger, and when they linger for long enough, they have a habit of staying.

The Hudson Valley and the Berkshires offer something bordering on magic, an opportunity to pursue life’s passions among the rolling hills and lush pastures in an honest, determined way. When combined with natural ambition, pursuit in our area brings new meaning to the term “down-home.” So this beloved alchemy was for cycling enthusiasts Jordan Hutton, Chris Antonelli, and Gabriele Caroti when chance meetings turned to shared passions and eventually, the lure of hopeful ambition followed. With their hearts alive with the possibility of pursuing a small cycling business venture in the Hudson Valley, the torch bearer for local bike repair was the one to add the last ingredient to the trio’s small business hope.

For decades Grant Hermans, and his congenial bike shop Bash Bish Bicycle have sat nestled in the heart of Copake Falls, NY, tucked within the broad shoulders of the Berkshire Foothills and the loving embrace of local cyclers. The visage of Grant tuning bikes in his small workshop had become part of the vast mural of life in the area and a lasting memory for those that, despite their travels, recognize the Hudson Valley as home. It couldn’t be more apropos then, that the torch bearer for local bike repair be the one to add the last ingredient to the trios small business hope. Now, combined with the tradition of Grant Herman’s former Bash Bish Bicycle, Jordan, Chris, and Gabriele have formed a kindred bond around their love of cycling. They took a moment to sit down with me and describe how they met, their passion for the area and its relationship to cycling and how they will continue to carry the torch of the newly named Bash Bish Bicycles.

What prompted your pursuit of opening a bike shop? What brought you to the Hudson Valley?

JH: I was raised in Wingdale, NY, and have been riding around the area for a long time. Opening a bike shop of my own was a slow build of working on bikes in my spare time and continuing to pursue deeper knowledge in the sport and culture of cycling. That passion and some serious serendipity lead to me meeting my business partners Chris and Gabriele and we were presented with an opportunity we couldn’t refuse in taking over Bash Bish Bicycles.

CA: It’s long been a dream of mine to operate a bike shop. I’ve been working in bike shops off and on since I was a teenager. I moved to Millerton from Brooklyn a couple years ago. I’d been visiting friends  and riding bikes in the area and just fell in love with it. The Harlem Valley Rail Trail (HVRT) was a huge draw for me as it provides great access to nature and a safe place for my two daughters to learn to ride bikes.

GC: I’ll second what both Jordan and Chris said. The serendipity of meeting Jordan first, and the possibility of continuing the tradition of Grant’s beloved business was a big part of it for me. The area is just so beautiful, stunning even. Although my family and I are over in Sharon, CT, the whole landscape of the Hudson Valley, Harlem Valley, the foothills of the Berkshires, and of course the Berkshires themselves, is all breathtaking and incredible for cycling.

How did you all come together and decide to pursue a cycling business?

JH: As mentioned above, the stars seriously aligned for all of us to meet. Chris and I met in Wassaic on the Rail Trail and immediately hit it off due to our mutual love of ‘country bikes’ as Grant Petersen of Rivendell Bicycles has termed a certain style of bicycle. Chris and I began talking about how we could bring that upright body position, and a utilitarian, sporty, comfortable and classically beautiful bike to riders in the area. At the same time, I was working on Gabriele’s bike in my home bike shop aka my apartment’s kitchen. Gabriele texted me one day out of the blue seeing if I had any interest in opening a bike shop. I was elated and told him to meet me at McEnroe’s so I could introduce him to Chris as we had been discussing this venture for the past six months. At the meeting we had really great synergy and hit it off, and one thing led to another and we were able to secure our deal with Grant Hermans, the founder of Bash Bish Bicycle and the torch was handed to us.

CA: We’d been talking about it for a while because the area doesn’t have many bike shops and we didn’t see the kind of bikes we wanted available anywhere. We even toured a few other locations as potential shops, but decided to hold off until the right place came along. When we heard Grant was retiring, it felt like the stars were aligning and we jumped at the opportunity to take up the mantle. The location is perfect: right on the Rail Trail and at the entrance to Taconic State Park. Especially now that the trail is open all the way from Wassaic to Copake, it felt like the right time to get into the business.

GC: Yes, precisely. And for me, in addition, a lot of it has also been my life and professional priorities changing in the course of 2020 during COVID and in the wake of the lockdown. I work in the film industry, and as you know that was heavily impacted – and still is – due to the virus. My business specifically has been heavily affected. With that said, my love of bikes was too, but in the opposite direction: it increased by big margins! That, coupled with my family spending all of the lockdown in Sharon (from Brooklyn), made bike riding a huge priority and activity for us. We went – and still go – on a lot of bike rides together. I myself bought two more bikes, ordered numerous parts and frames on eBay, was obsessively watching cycling videos and movies, and my constant tinkering on all our bikes exponentially grew. This all came to a head when one day I was dropping off a bike with Grant, asked him how business had been and his answer was, “I had my best year ever, but it’ll be my last as I’m retiring. Do you know anyone that wants to buy a bike shop?” And I replied, “Yes! I do!” I then immediately texted Jordan – from the parking lot of the shop!

Has cycling been a long-time hobby? What is it about our area that is so conducive to those who enjoy biking?

JH: Cycling has been a long time hobby of mine and has evolved into a burning passion. From growing up riding in Millerton with all of my friends as newly independent adolescents, to eventually getting my first serious adult bike, a Kona mountain bike at 13 years-old which opened many doors. Eventually I got my first serious road bike at 20 years of age, and at 29 years-old I went to Yamaguchi Frame building school in Rifle, Colorado to build a custom frame, fork, and stem for myself. Cycling has been a long and continuous thread in my life.

This area is so beautiful and is such an inspiring and relaxing location to ride bicycles. There are great towns to stop and take breaks in and such a marvelous network of backroads if you feel like dipping off the HVRT. Once you start riding around here, you will want to keep doing it more and more.

CA: Like so many American kids, I grew up in car-dependant sprawling suburbs. My first bike was such a pivotal moment for me: all of a sudden, I could explore parts of my neighborhood and spend time with friends on my own terms. Similarly, in college, I got a bike and it totally opened up the city to me. The sense of freedom a bike gives you never goes away. Whether it’s cruising down the Rail Trail, up and down mountains or sailing past traffic in the city, nothing beats that feeling!

The Hudson Valley has a great mix of riding. Obviously the HVRT is an amazing amenity and is a fantastic place for riders of all ages and abilities. We’ve also got miles and miles of scenic roads that wind up and down hills that are the envy of racers across the country without any heavy traffic. I’d love to see the development of some mountain bike trails in the area as well.

GC: Yes, like Jordan and Chris, I adore cycling. I remember the day my father took off my training wheels on my little red Takara and gave me a big push. I sped down the driveway and didn’t look back; it was life-changing! Since then I’ve ridden my whole life, and like Chris, got a new bike in college and explored everything around me on it in coastal Maine.

And I love riding this whole area. It’s fantastic. There are trails, dirt roads, paved crests with stunning views, and also challenging, steep climbs. And the Rail Trail is of course fantastic; when it opens up north of Millerton towards Copake Falls, it’s breathtaking, especially on a summer morning surrounded by wildflowers!

What are your plans for the future of Bash Bish Bicycle? What is the character of the store that you envision?

JH: As Chris mentioned, we really want to maintain what Grant Hermans achieved with Bash Bish Bicycle. We also want to be a beacon in the local cycling community and at large. Simply put, our aim is to get people on bikes that they feel comfortable on and proud of, thus inspiring them to ride around the fabulous area we live in. We hope to put more locals on bikes more often, but also attract passionate cyclists from out of town to come and experience all the area has to offer.

CA: We’re really lucky to be able to build on the legacy that Grant built at Bash Bish. It’s been a fixture in our community for more than two decades and we want to honor that by centering the local community and building those same kinds of relationships. We’re also big fans of the outdoors and would love to make Bash Bish Bicycles a regional hub for cyclo-touring and bikepacking (self-supported camping on bikes). We’d like to be able to offer something for everyone from reasonably-priced hybrids for cruising up the trail, to high-end carbon fiber machines, to traditional handmade touring bikes for folks who want to take full advantage of our beautiful surroundings.

GC: I couldn’t have said it better. Bash Bish Bicycles will continue and we’ll expand upon Grant’s vision. It will be (and I hate using this term, but it is accurate!) a curated shop. We have products that we all love and stand behind, from vintage steel frames and full bikes, to our preferred patch kits, bells, fenders, and cycling caps. (And we already have our own line of summer gloves, thanks to Jordan!) And not to shill too much, but I’d like to add that we will carry a full line of children’s bikes! Chris, our resident kids’ bike expert, secured a relationship with Cleary, a fantastic brand we adore. Grant told us that he watched all the kids in the area grow up and got them their first bikes and we’d love to continue that tradition! 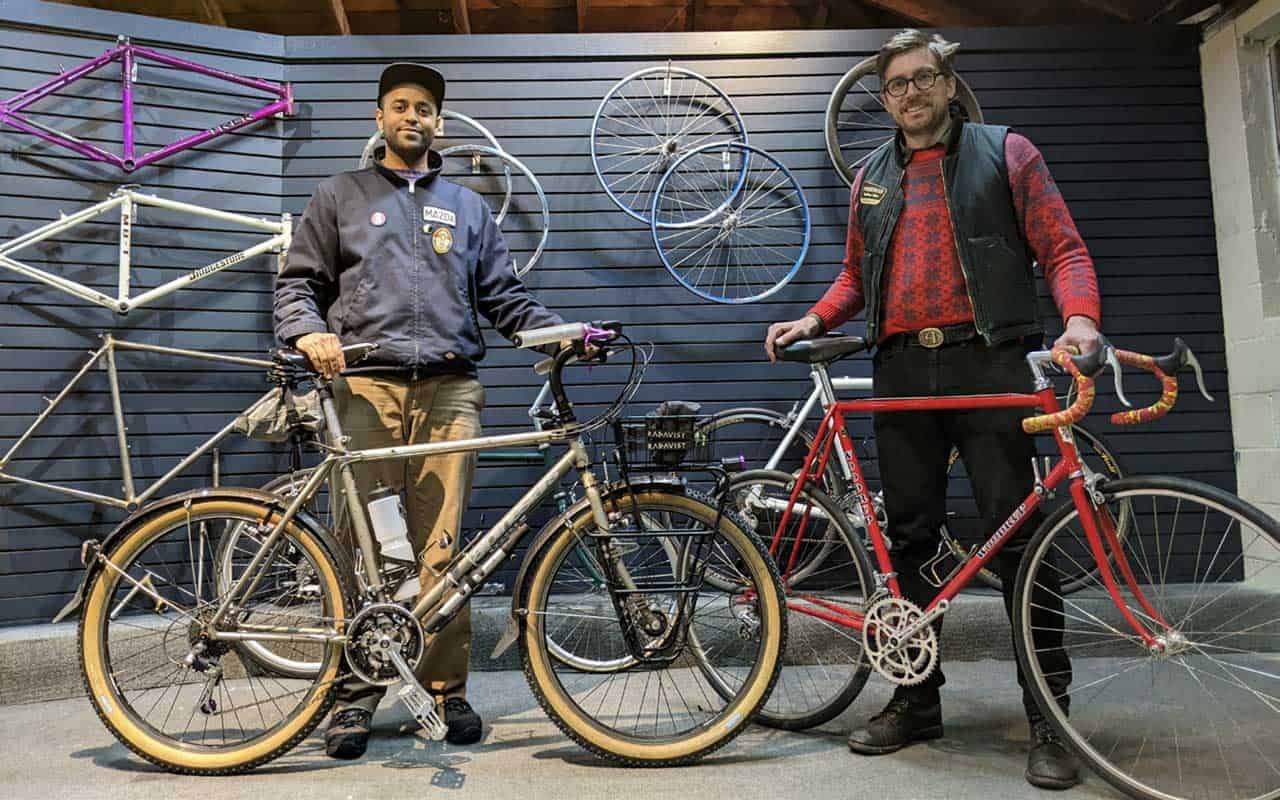