The Hillsdale Family That Put A Man On The Moon

Sometimes a topic for a blog post comes to us through sheer luck. This happened recently, when we received an inquiry from Lance Fromm, an Andover, MA antiques dealer.

“Hello … I have come across a walking-stick with a silver engraved cap on top that reads ‘J. B. Collin Hillsdale NY.’ A Google search for that name and location turns up information about a Civil War Union Major of that name, with family connections to Hillsdale, NY … If you know of any descendants of Major Collin in your area I would appreciate your telling them about this; and if they would like to have this item to keep in the family they can contact me.”

We’ve long been curious about the Collin family, early Hillsdale homesteaders descended from French Huguenots who had immigrated to Narragansett, RI in 1685. The original Collin emigrant was Paul Collin, born on the Isle de Re, a French Huguenot stronghold that was one of the last places to fall to the forces of Louis XIII and Cardinal Richelieu in 1628 during Catholic France’s attempt to rid the nation of Protestants. After five years, the Huguenot Rhode Island colony broke up and families dispersed to other Huguenot communities in Boston, New Rochelle, New York City, and Milford, CT. 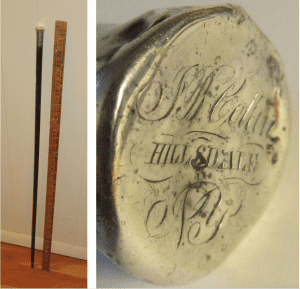 Paul’s son, John, was the first Collin born in Colonial America, probably in Milford CT, in 1706. He worked as a ship captain until 1846, when he disappeared and was presumed lost at sea. His son, John II, married Hannah Merwin of Duchess County in 1758 and moved his family to Hillsdale in 1788. In 1790 he bought a farm located near the intersection of Collins Street (the “s” was added later) and Collins Street Extension, where he lived until his death in 1809. The farm stayed in the family for seven generations.

The location of the Collin farm is marked by a large rock with a bronze plaque that reads:

THIS FARM WAS SETTLED IN 1790 BY JOHN COLLIN II AND HIS WIFE SARAH ARNOLD. IT REMAINED IN THE FAMILY FOR SEVEN GENERATIONS.

COLLIN (1732-1809), AN EARLY AMERICAN PATRIOT, WAS COMMISSIONED A CAPTAIN IN 1777 BY NYS GOVERNOR GEORGE CLINTON, SERVING IN SEVERAL REGIONAL REGIMENTS AND WAS A PROMINENT MEDIATOR IN THE MANOR TITLE CONFLICT OF 1795, THE ONGOING RESISTANCE TO LEASEHOLD TENURE IN COLUMBIA COUNTY.

HIS GRANDSON, JOHN FRANCIS COLLIN (1802-1889), WAS ELECTED TO THE NY STATE ASSEMBLY IN 1834 AND LATER SERVED IN THE 29TH CONGRESS U.S. HOUSE OF REPRESENTATIVES.

THE COLLIN FAMILY DESCENDED FROM THE FRENCH HUGUENOTS WHO EMIGRATED FROM THE ISLE OF RÉ TO NARRAGANSETT IN 1685. 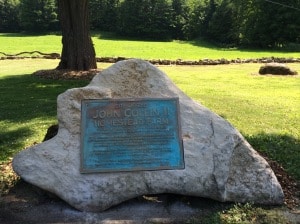 As Town Historians, we don’t do genealogical searches, and certainly not for hire. But the walking stick was such a treasure; how could we not try to track down a living descendant of J.B. Collin? We asked Sally Laing, a Hillsdale resident with a vast array of historical books, documents, and knowledge of the town, if she knew of any living Collin descendants. Sally loaned us a Collin family genealogy she’d found online which took us from 17th century France to 1980’s Hillsdale. It is a fascinating timeline of a family whose accomplishments span three centuries, and in this blog we highlight only a few of the extraordinary members of the Collin clan.

First, to the owner of the walking stick.

J.B. Collin was John Bingham Collin, the great-grandson of John II’s younger brother, David Collin. Born in 1840, he graduated from the Hudson River Institute in Claverack and worked on his family’s farm until 1861 when, at the age of 21, he enlisted in the Union Army, Company H, 91st Regiment, New York Volunteers. 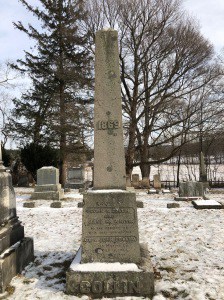 Collin served in the 1863 Siege of Port Hudson Louisiana. At 48 days — from May 22 to July 9 –it was the longest siege in American military history. The siege was part of the great struggle for control of the Mississippi River and pitted 40,000 Union troops against 7,400 Confederates defending fortifications on an 80-foot-high river bluff. In 1863 Port Hudson and Vicksburg, Mississippi, 150 miles to the north, were the last remaining Mississippi River strongholds in Confederate hands.

Both sides suffered terribly from the fighting, the summer heat and disease.  One soldier wrote home: “The mosquitoes give us the devil of nights, & … do what the roar of the enemy’s cannon has not been able to do—keep us from the embrace of tired nature’s sweet restorer balmy sleep.” By late June, the Confederates had begun to run out of food. “We eat all the meat and bread in the fort…eat all the beef–all the mules–all the Dogs–and all the Rats around us.”

Heavy losses were sustained: between 4,700 and 5,200 Union men were casualties, and an additional 4,000 fell prey to disease or sunstroke; Confederate forces suffered around 900 casualties from battle losses and disease. Soldiers who fought there would never forget their harrowing experiences.

It is said that John Bingham’s health was ruined by the war and only with the constant ministering by his wife, Lucy, was he able to maintain a somewhat normal life. After the war, he started a business in New York City and lived in Rutherford, NJ. Summers were spend at the Bingham Collin farm on Hunt Road, which John Bingham inherited from his father. They retired to the farm in 1888. John Bingham Collin died in 1894 at the age of 54. He is buried in the Collin Family Cemetery on Hunt Road, where his headstone reads:

We’ll never know how John Bingham’s walking stick came into the possession of an Andover, MA antique dealer, but thanks to Sally’s book, we were able to peer deeper into the Collin family tree, which boasts an astonishing number of accomplished descendants. One is John Francis Collin who compiled A History of Hillsdale, a historical resource we rely upon extensively.  Published in 1883, it presents a detailed history of Hillsdale’s first 130 years.

A lifelong resident of Hillsdale, John Francis was born in 1802, the son of John Collin III and Ruth Holman Johnson Collin.  In 1869, John Francis and his sister, Jane, erected a monument in the Hillsdale Rural Cemetery to honor their great-great-grandfather, the first John Collin, who had been lost at sea.

John Francis had eight siblings. One of them, Henry Augustus, was the progenitor of a Collin line of great distinction. More about him later.

In his youth, John Francis had been educated at the local “common” or public school and then attended Lenox Academy for a year. Beyond that he was largely self-educated.  It is said that he was a voracious reader. 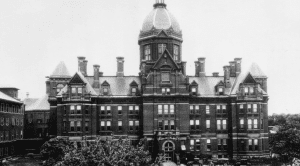 The Johns Hopkins Billings Administration Building in the early 1900s. TRIVIA ALERT! It served as a residence for doctors in post-medical school training until the 1950s. As a result, those trainees came to be referred to as “residents.” That’s where the term “resident” for medical post-grads was coined.

John held various local, state and national offices: in 1834 he was elected to the state legislature representing Columbia County, then elected Town Supervisor of Hillsdale from 1837 to 1843.  In 1844, he successfully ran for Congress and served from 1845 to 1847.

In his later years, John toiled on his A History of Hillsdale. Prior to his death in 1889, he was a frequent (and acerbic) contributor to the forerunner of the Hudson Register-Star.

Politicians, physicians, and scientists were plentiful in the Collin family tree.  Frederick Huntington Bartlett (1872-1948), one of John Francis’s grand-nephews, was a noted New York pediatrician whose 1932 book Infants and Children: Their Feeding and Growth was so influential it earned Dr. Bartlett a six-page Brendan Gill profile in The New Yorker in 1944.

Another of John Francis’ grand-nephews was Frederick Collin (1850-1939), who served for two terms as Mayor of Elmira, NY before embarking on a distinguished career as a judge on the New York State Court of Appeals.

Still another of John Francis’s grand-nephews, Dr. William Henry Welch (1850-1934), was a pioneer in the field of of pathology who introduced into this country germ theory as the cause of disease, which revolutionized the course of medicine.  In 1884, at age 34, he was chosen as Dean of the medical faculty at the new Johns Hopkins Medical School, and was responsible for securing the famous first faculty, known as the “Founding Four,” who codified the teaching of medicine based on science and clinical research. In 1916 he embarked on a second career as director of the newly established School of Hygiene and Public Health at Johns Hopkins (today called the Johns Hopkins Bloomberg School of Public Health). He also served as the President of the board of directors of the Rockefeller Institute for Medical Research for 33 years.

The life of Frederick Collin Walcott of Connecticut  (1869-1949), John Francis’s great-grand-nephew, is worthy of an entire book on its own. A graduate of Phillips Academy and Yale, he had an extraordinary career in banking and public service and was an aide to Woodrow Wilson at  the 1919 Paris Peace Conference, which ended World War I. He held state and federal elected offices, serving as a United States Senator from 1928 to 1935. An ardent conservationist, Frederick Collin Walcott was a lifelong fishing companion of Herbert Hoover.

But it is another branch of the Collin family tree that gives us the title for this post. Henry Augustus Collin, John Francis’s younger brother, moved his family to Mount Vernon, Iowa, in 1856 where for 40 years he served as Treasurer of Cornell College (founded by and named for a distant relative of Ezra, founder of Cornell University in Ithaca, New York.)

And Henry Augustus’s great-grandson achieved something out of this world. 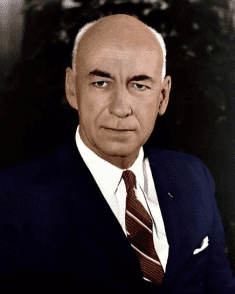 Their fifth child, Henry Augustus Gilruth, was born in 1881. He married Frances Marion Rowe in 1909 and in 1913, their son, Robert Rowe Gilruth was born.

Robert “Bob” Gilruth became an aeronautical engineer at the Langley Aeronautical Laboratory of the National Advisory Committee for Aeronautics (the forerunner of NASA). In 1958, Bob  was selected to be the director of NASA’s Project Mercury.  After the completion of astronaut John Glenn’s historic 1962 mission, in which he became the first person to orbit the earth, Colonel Glenn and Bob were each presented with the NASA Distinguished Service Medal by President John F. Kennedy at Cape Canaveral.

In 1965, Bob was picked to lead the brand new Manned Space Center in Houston. In this role, he oversaw the entire Apollo program, including the mission of Apollo 11, the first-ever landing on the moon.

Our search for a direct descendent of John Bingham Collin was fruitless: he and Lucy had no children. But there’s a happy ending: Mr. Fromm has generously offered to donate the walking stick to the Roe Jan Historical Society, which maintains a collection of artifacts from John Bingham and Lucy Collin. In fact, you can visit John Bingham Collin’s Civil War uniform and boots, and Lucy’s painting of him, which are on loan to the Town of Hillsdale and are on display at the Town Hall.

We are indebted to Hillsdale resident Sally Laing, who loaned us John Collin: Stem and Branches: The descendants of Captain John Collin and his wife Hannah Merwin Collin of Milford, Connecticut by Ruth Collin Strong (Elmira NY, 1980), from which much of this post is sourced. 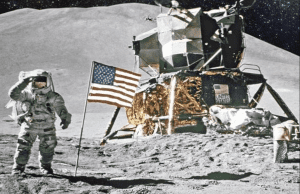