The History of Millbrook, NY 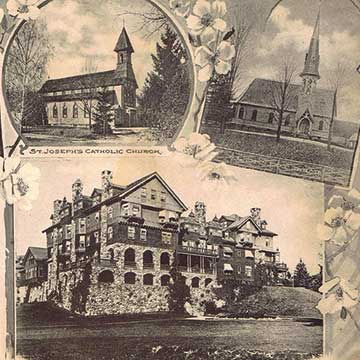 Millbrook, as we know it today, has strong, deep roots that date all the way back to the 1860s. On what had been the old Isaac Haight farm, the village was laid out by Franklin Merritt in 1865-1869. Merritt had great incentive to develop the land because he knew of the plans about building a railroad line through the area, a railroad brought to the area by George Hunter Brown, whose estate was Millbrook’s namesake. Not only did Merritt create the plans for the small town, but he also rather shamelessly named two of the main roads that passed through: Franklin Avenue and Merritt Avenue. Though his plans were assembled in the 1860s, it was not until late 1895 that Millbrook officially became an incorporated village.

The formation of Millbrook as an official entity was necessary to accept a gift, the Thorne Memorial School, from the local, and quite influential, Thorne family. The Thornes were among the earliest settlers, also donating land for the Tribute Garden, and creating a foundation to provide annual scholarships and support civic projects.

Prior to Millbrook’s more thorough establishment, though, the early settlements in the area consisted of mostly Quaker people. However, as time passed, diversity in the village increased, with waves of immigrants from Ireland, Italy, and other European areas arriving. Throughout the diversification of the area, Millbrook has still kept religion as a part of its core. After the Quakers established themselves in the region, Methodists, Episcopalians, and Catholics soon followed, and today all remain represented in the town.

The early citizens of Millbrook, according to David Greenwood, Millbrook’s town historian, “were involved much as they are today, visiting shops, providing services, attending church, supporting community activities.” As a result of the railroad nearby, many took employment either on trains, or on the track for maintenance. Others, if not working on the rails, farmed and shipped produce along the train’s network. Another option was to move goods through the major roads and turnpikes, bringing products to places like Poughkeepsie to be sent to markets on the Hudson River.

Other occupations in early Millbrook included standard jobs for the time, as there were butchers, grocers, farmers, and lumberers. People also worked as realtors; were employed at inns and antique shops; and provided landscaping, farming, and animal husbandry services for the nearby estates.

Additionally, teaching was an occupation available at the time.

One of the earliest schools in the area, the Nine Partners Boarding School, opened in 1796. A famous Quaker academy, the Nine Partners Institution was co-ed, which was unusual at the time. Eventually, prior to the official planning of Millbrook, the school relocated to Union Springs, NY, in 1864.
One way the people of Millbrook sought their education was through one-room schoolhouses, and these could be found throughout the greater Millbrook and Washington area.

In 1896, the Thorne Memorial School opened, and this institution offered not only academic classes, but occupational courses as well. These classes included blacksmithing, carpentry, sewing, and home economics. Many students saw these courses as highly useful, and thus these classes became an incentive that kept people in school, and prevented students from dropping out.
Another institution, which soon came to be Bennett College, was once a luxury hotel by the name of Halcyon Hall. This hotel, purchased by Mae Bennett in 1907, was transformed into a young ladies’ finishing school. The academy eventually developed into Bennett College, but then closed in the 1970s.

When the people of Millbrook were not busy with work or school, they took up various hobbies. Mainly these interests fell into the sporting category. Still engaged in today are activities such as the Millbrook Hunt, the foxhunt on horseback founded in the 1890s. Some who prefer to follow the hounds on foot rather than horseback choose to foxhunt with the Sandanona Hare Hounds. The Sandanona beagles and bassets reside in kennels at the Thorndale estate. In addition, fishing and shooting clubs have grown to be popular in the area, with Orvis Sandanona Shooting Grounds and Tamarack Preserve nearby. The neighboring hamlet of Mabbettsville also has a town park for Millbrook citizens to appreciate, and sports and activities sponsored by the town Recreation Commission are enjoyed today by many.

Another site in the village that many can admire is the Tribute Garden on Franklin Avenue. Upon its establishment, the park was dedicated to those who served and passed away in World War I. In addition, the Veterans Green is another commemorative space dedicated to the memory of those from the wars following. This dedication came with the disbandment of the railroad, making that occurrence a key event.

Architecturally, one can further witness the influence of the railroad on Millbrook as a village. Greenwood notes that “early buildings reflect Millbrook’s origins as a 19th-century railroad town.” For example, the brick building where the Bank of Millbrook is currently located was the railroad’s original headquarters. Where Merritt Books stands used to be a freight building along the railroad bed. In addition, the admirable building where the Thorne Memorial School stood, on Upper Franklin Avenue, is being “re-imagined as a destination for community activities and events,” according to Greenwood. It is clear that the community of Millbrook, to this day, remains in touch with its earlier roots.

A local walking tour through the village, accompanied with signs, descriptions, and photographs documenting early views of the small town, will make this clear. When one embarks on this tour, it becomes clear to see that Millbrook has in fact changed very little, despite the constant advancements of the modern world. As Greenwood puts it, “We remain a small village surrounded by open countryside with many farms, horses, and walking trails.”
Though modern technology has not completely transformed the village, it has made it easier to visit the community. Online, one can access information on all the services, shops, and more that Millbrook has to offer. However, nothing beats experiencing Millbrook in person.

If you are lucky enough to visit the village of Millbrook, Greenwood recommends parking your car and walking along the streets. On your walk, he suggests visiting the Tribute Garden, as well as the library. He recommends taking the self-guided walking tour, enjoying the restaurants in town, and browsing the antique shops and specialty retail stores. He also advocates for exploring greater Millbrook, suggesting stops at the Trevor Zoo at Millbrook School, the Innisfree Garden, the Wethersfield Garden, and the Cary Institute of Ecosystem Studies. Do make it a goal to visit all the wonderful places Millbrook has to offer. As Greenwood encourages, “Seeing is believing!” •

A special thank you to David Greenwood, Millbrook’s town historian, for assisting us with all of the information and photographs for this article. To learn more about Millbrook’s history, you can also visit The Millbrook Historical Society online at www.villageofmillbrookny.com.