The Importance Of Being Frank

Young Benjamin had been sitting, patiently, with his family at one of the community tables on the patio at “frank,” the captivating new restaurant in West Cornwall, CT. While the others had mastered a salad and an elegant asparagus with lemon ricotta appetizer, he was left to anticipate the Margherita pizza that appeared as entrées were fetched from the kitchen with exact timing. An aspiring writer, he was careful in his consideration of the rectangular offering and took a few moments to savor the crispy crust and the robust sauce. His verdict? “Excellent.”

It is little wonder that the early casual reviews of frank.food company in its newly opened location proximate to the Housatonic River rapids below the covered bridge have become an energetic chorus. A compact menu of entrées that offer cod, salmon, chicken and beef is complimented by three pizza options, appetizers, and desserts that include “Old-fashioned Devil’s Food Cake” that the owner, Frank Way, modestly makes, himself. “I want people to enjoy something like grandmother would make … really good Devil’s Food cake. It’s food from pleasant memory.”

From fashion and television to food

The “long and winding road” that has brought Frank to this spot is an engaging story in itself. Trained in design at New York’s Pratt Institute, Frank entered the high-pressure world of fashion advertising by joining the Calvin Klein brand. After several years in the New York fashion center, he found himself in Los Angeles … in the television business. But, New York and fashion were in his blood, so Frank reappeared on the East Coast only to become part of the Martha Stewart empire, working on the production of her daily television show. 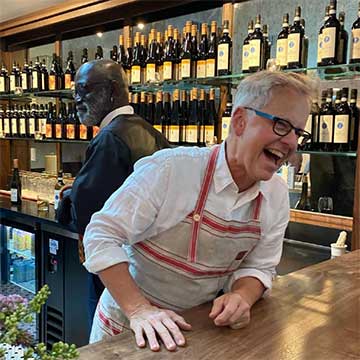 From fashion and lifestyle, the next iteration of Frank’s career delved further into production, this time with a focus on children’s programming for such notable brands as HBO, TBS, and Disney. Then, between commutes to Orlando from New York and the calculated frenzy of TV production, the call came inviting him to Columbus, OH, to take a look at Lane Bryant, a part of The Limited.

As creative director for Lane Bryant, Frank took his great experience in brand building to new heights, enlisting the likes of Queen Latifah and rock band KISS to revitalize the brand. While in Columbus, Frank became involved in competitive rowing and was part of the national champion team of senior rowers that competed in national championships in Sacramento, CA.

Could this story take another detour? Yes.

A place to call home

frank.food company was born of a suggestion that Frank look at a newly available space on the Main Street of Kent – a place that had been a food shop and contained a small kitchen. Food? “I was a brand guy. What did I know about the food business?”

Frank’s candor matched his curiosity and he began doing the research, audience profiling and brand strategy that had become his passion. Enter “frank.food company” in Kent. Breakfast, lunch, carry out, imaginative menus. “I had a 15 year plan,” he remarks, casually. “There would be a full service restaurant, branded food products, the entire package.” Enter COVID-19.

“The world changed. We had to close the indoor space and concentrate on carry out and a new idea. We’d post two menus online each Thursday and folks would order for the weekends. Four nights. Two specials. We’d sell out in hours.” Jarlath Mellett, Frank’s husband who is a noted fashion designer pitched in with the cooking. It was a family affair.

Energy to burn and a personality to match

While mastering this new kind of meal offering, a space became available “up river” in West Cornwall. Part of a grand design to re-vitalize the village, putting a new restaurant in the center would attract visitors and serve as a platform for enhancing the charm and vitality of the town. Was Frank interested? This is a man with energy to burn … with personality to match and an unquenchable need to consider possibilities and create something new.

Architecture and design were required, along with complete refurbishing the building that had been the coach house for West Cornwall’s iconic “Pink House.” A kitchen was added, walls constructed, a bar built to rigid specifications. The ominous “supply chain issues” slowed things down, but with patience and foresight, Frank endured. And, with the flare and fundamental honesty of a great dining experience, frank.food company left Kent behind at Thanksgiving 2021 and emerged in May of 2022 in a place of pure delight. 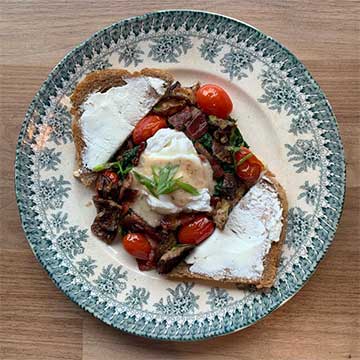 Open Thursday through Saturday for dinner with brunch on Saturday and Sunday, frank is staffed by a charming army of servers who clearly understand the concept of pleasant service. Food comes from the kitchen managed with aplomb by Chef John Carlson, a Culinary Institute of America graduate. As the restaurant concept and realization emerged, Frank drew on his years of brand building by reaching out to expert consultants who could provide the perspective and insight to critical to success. “I was able to draw on the expertise of Katy Sparks who created The Quilted Giraffe in New York and engineered the revitalization of Tavern-on-the Green. We needed a pizza offering, so I worked with Joel Deland to fashion an offering that’s unique, accessible and … important … delicious.”

In Frank’s own words, his eponymous restaurant is “not fussy. It’s accessible to everybody.”

A large outdoor patio sports the community tables that welcome larger groups and put smaller groups together in a casual environment that can be a social or as private as the diner would like. Interior seating and the bar area can have a “party atmosphere” or be more sedate as the evening winds on. “Our menu is going to evolve as new items are locally available. This winter, we’re thinking of offering an ‘apres ski’ menu on the patio. We’ll have heaters and serve hot drinks for skiers leaving Mohawk Mountain.”

Frank Way is quite candid about how his intriguing life has led him to opening a gem of a restaurant in West Cornwall. “It’s like being in a play. Each day, each meal is part of a performance. We want our customers to have a great meal and have fun.” Mission accomplished. •

frank.food company – frankfoodco.com – is located 34 Lower River Road in West Cornwall, CT. Phone is (860) 248-3250.  Reservations can be made on their website through resy.com. The site is both easy to use and very communicative once reservations are made. 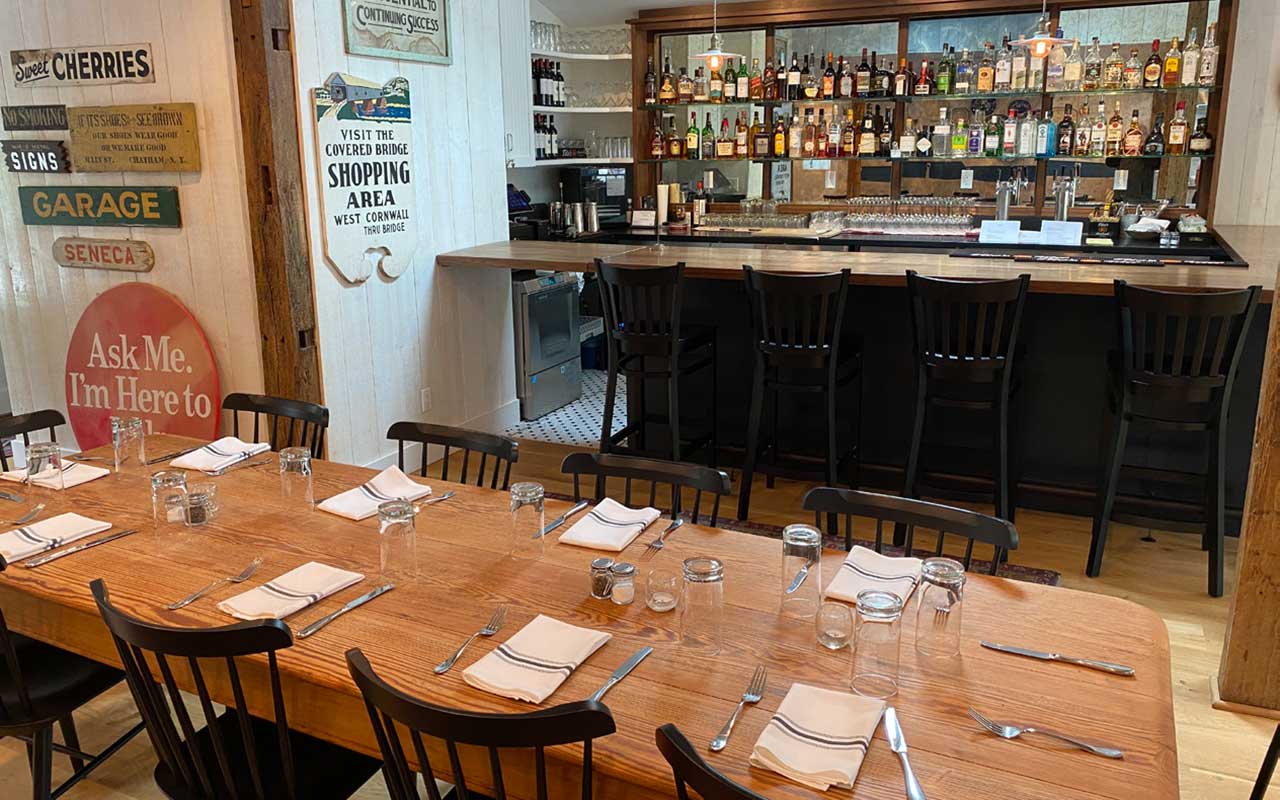