The Man Behind the Mountain

— by the Hillsdale Historians

The Taconic Mountains extend about 180 miles from southern Dutchess County and northwestern Connecticut up through Berkshire County, Massachusetts and on to Brandon, Vermont. The Taconics afford a number of spectacular views of the Hudson Valley; some feel that there is no finer view than that from the summit of Mt. Fray.

Mt. Fray rises to an altitude of 1893 feet, less than half that of the highest peak in the Taconic range, Mt. Equinox (3816 feet) in Manchester, VT. But it was high enough to attract the eye of John “Jack” Falconer Fisher III, who built a ski resort on it and called it Catamount. 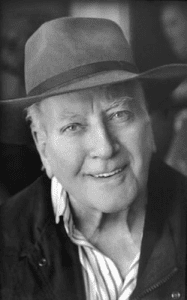 This isn’t a history of Catamount — you can read a terrific history from the Roe Jan Independent here. It’s the man behind the mountain we find interesting.

Jack Fisher was born in Atlantic City, NJ in 1914, the son of John F. Fisher, Jr., and Hannah Marter. Not long after Jack was born, his family moved to Salisbury, CT. When he was 16, Jack became a licensed pilot. Over the years, he loved to fly over the Taconics, always on the lookout for a suitable spot for a ski area or a golf course. A farm on Mt. Fray caught his eye and in the late 1930s he bought it. With some friends, Jack began hand cutting a number of trails and Catamount opened for business in 1939.

Unfortunately for Jack, World War II caused the shutdown of Catamount from 1943 to 1945. By then Jack was in the military, putting his extensive flying experience to work as an instructor at the brand new Ryan School of Aeronautics in Tuscon, Arizona, which was then operated by the U.S. Army Air Corps. Incidentally, Jack’s draft card lists him as 6′ 3″, a lanky 145 pounds and possessing brown hair and a “sallow” complexion. (One might have thought that the latter would have been grounds for being unfit for service, but perhaps it was an error.) Note that he lists his employer as Catamount Ski Tows, Inc. 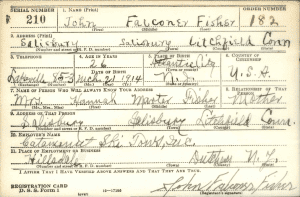 Once the war ended, Jack reopened Catamount. Apparently, it didn’t occupy all of his time and, looking for something else to do, he bought land near Pittsfield, MA and built the Jiminy Peak ski area. Jack had a number of enthusiasms beyond flying and skiing. One of them was motorcycles; one nearly proved the end of Jack. According to news reports, on July 1, 1933, Jack and a second rider, Dolan Garrity, crashed “at high speed” into a car driven by Mrs. Carrie Landon. Although both riders were catapulted into the air, and Mrs. Landon’s brand new LaSalle was pretty beaten up, nobody was seriously injured.

Not suprisingly, another enthusiasm was sports cars. By 1955, Jack had acquired an MG-TC convertible. Jack lived near the Vaill family farm in Lakeville, CT. The farmer’s son, Jim Vaill, would invite Jack over in his roadster and the two of them would bomb around in the farm’s gravel pit. In a 1997 Hartford Courant interview, Jim remembered “beating that poor little car to death.” 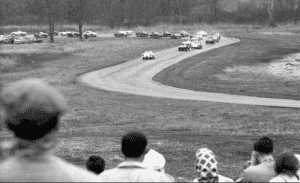 A race at Lime Rock Park

Before long, folks were hearing about Jack and Jim and their exploits in the pit. At the suggestion of the Sports Car Club of America (SCCA), Jim and Jack dreamed up Lime Rock Park, and just two years later on April 20, 1957, the track held its first event, an SCAA-sponsored driver school. The event attracted some 6,600 spectators and 152 drivers, among them famed news anchor Walter Cronkite.

Also during the 1950s, Jack had a chance encounter on a Manhattan sidewalk with an advertising executive from the Leo Burnett agency. Burnett had the Marlboro cigarette account and was scouting for someone to serve as the Marlboro Man in print ads. The exec thought that Jack had the right “look,” and Jack became one of the earliest Marlboro men.

Jack sold his remaining share of Jiminy Peak in 1969, and sold Catamount in 1973. He eventually settled in Waitsfield, VT, (ironically, the home of the Sugarbush Ski Resort) to be closer to his daughters. Jack died in Vermont in 2011, at the age of 97, but his legacy is all around us. 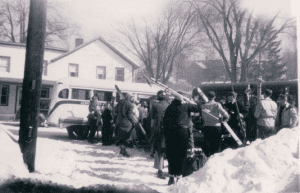 Skiers getting on the bus to Catamount 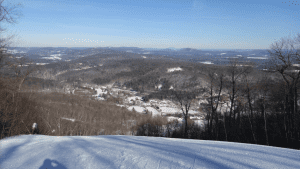 The view from Mt. Fray